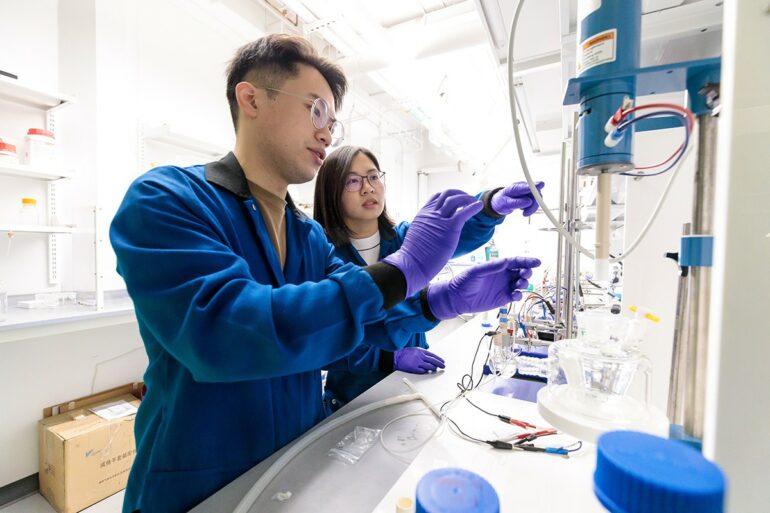 As more drivers adopt plug-in hybrid and electric vehicles, the demand for lithium-ion batteries will continue to explode over the next decade. But processes for extracting lithium can be time-consuming and chemical-intensive, and traditional sources—including brine and hard rock—could ultimately be depleted.

Scientists and engineers are now looking to unconventional water sources, including oil- and gas-produced water, geothermal brines, and rejected brines from seawater desalination. But how much lithium lies within these sources, and how to best extract it, remains an open question.

Asst. Prof. Chong Liu’s team now has the answer. By analyzing more than 122,000 unconventional water sources, she and her team discovered that there is, in fact, enough lithium within these sources to make it worthwhile to extract.

They also found that the composition of these sources—the amount of sodium, magnesium, potassium, and calcium—can affect extraction performance of an emerging technology, providing key insights for refining and optimizing it. The results were published in the Proceedings of the National Academy of Sciences.

“I hope these results will encourage others to study lithium extraction, especially to find better materials that can increase lithium selectivity,” Liu said.

Finding the right sources and materials

The technology Liu and her team studied is electrochemical intercalation, a highly selective method for extracting lithium that has not been studied widely among different water sources. The method uses electrode materials or membranes to drive ions from the water source into a solid structure. The intercalation process strips the water away from the ions, and the lithium ions bind to a material framework that has been designed to favor them.

But these water sources also contain ions that are very similar to lithium ions in both mass and charge, namely sodium, magnesium, potassium, and calcium. The team wanted to better understand how the network of these ions affects electrochemical intercalation selectivity of lithium.

They found that sodium acts as a competitor for storage sites within the material framework, while magnesium and calcium can affect the charge transfer of lithium, affecting how selective the material ultimately is.

“This shows that the key challenge of the electrochemical intercalation method is how to improve lithium selectivity compared to sodium,” Liu says. “We show that is the main concern that scientists should consider going forward.”

Liu hopes these results will inspire scientists and engineers to identify materials that can increase lithium selectivity, and she and her team are also studying materials for this purpose.

In Apps and WebCompaniesSmartphones
on 13 December 20203 min read

“We have better defined the playground, and now more people can join in and study lithium extraction,” she said.