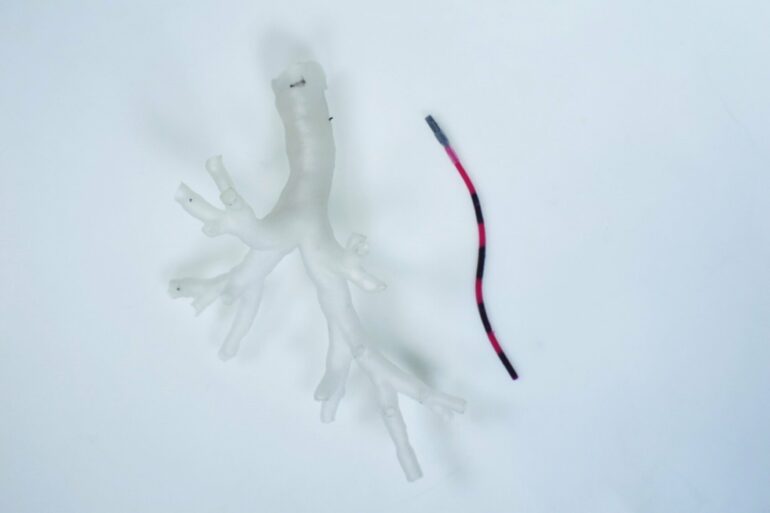 Engineers and scientists have developed proof of concept for a robot that can reach some of the smallest bronchial tubes in the lungs to take tissue samples or deliver cancer therapy.

Known as a magnetic tentacle robot, it measures just 2 millimeters in diameter, about twice the size of the tip of a ballpoint pen.

Magnets on the outside of the patient will be used to guide the tentacle robot into place.

The device has been developed by a team of engineers, scientists and clinicians based at the STORM Lab at the University of Leeds, which is pioneering the use of robotic systems to assist in endoscopy and catheter procedures, where a fine tube is inserted into body.

The researchers have published their findings in the journal Soft Robotics.

The proof of concept was based on laboratory tests involving a 3D replica of a bronchial tree modeled from anatomical data. The next phase of the research will investigate the effectiveness of the device in navigating lungs taken from a cadaver.

Currently, doctors use an instrument called a bronchoscope to carry out an examination of the lungs and air passages. The procedure involves passing a flexible tube-like instrument, about 3.5 to 4 millimeters in diameter, through the nose or mouth and into the bronchial passages.

Because of its size, the bronchoscope can only travel as far as the upper levels of the bronchial tree.

To delve deeper into the lungs, a catheter or fine tube measuring about 2 millimeters in diameter is passed through the bronchoscope and then into the smaller tubes of the lungs.

But doctors are limited in how they can move a bronchoscope, making it difficult to navigate the instrument and the catheter to where they are needed.

The magnetic tentacle robot, however, has been developed to be much more maneuverable, and uses a robotic guidance system that is personalized for each procedure.

Professor Pietro Valdastri, Director of the STORM Lab who supervised the research, said, “A magnetic tentacle robot or catheter that measures 2 millimeters and whose shape can be magnetically controlled to conform to the bronchial tree anatomy can reach most areas of the lung, and would be an important clinical tool in the investigation and treatment of possible lung cancer and other lung diseases.

“Our system uses an autonomous magnetic guidance system which does away for the need for patients to be X-rayed while the procedure is carried out.”

To develop the robotic system, the research team had to overcome two major challenges.

Firstly, they had to make a device that was small, flexible and able to navigate the twists and turns of the anatomy of the bronchial tree.

Secondly, they needed an autonomous system to guide the magnetic tentacle robot into place, doing away with the need for a doctor to manually maneuver an instrument into place, which often involves the patient being exposed to X-rays, and can be technically challenging for medical staff.

To reduce the size of the robot while retaining controllability of motion, the researchers manufactured it from a series of interlinked cylindrical segments, each 2 millimeters in diameter and around 80 millimeters in length. The segments were made of a soft elastomeric or rubber-like material which had been impregnated with tiny magnetic particles.

Because of the presence of the magnetic particles, the interlinked segments can move somewhat independently under the effect of an external magnetic field. The result is a magnetic tentacle robot which is highly flexible, able to shape shift and small enough to avoid snagging on anatomical structures in the lungs.

In Apps and WebSmartphones
on 27 November 202011 min read

Magnets mounted on robotic arms on the outside of the patient would be used to guide the device into the lungs in a process that would be tailor-made for each procedure.

The route through the bronchial tree is planned from pre-operative scans of a patient’s lungs and programmed into the robotic system. As the magnets outside of the patient move, they develop forces on the magnetic particles in the segments of the catheter, causing them to change shape or direction—enabling the robot to be maneuvered through the lungs and to a site of a suspicious lesion.

Once at the target location, the robot is used to take a tissue sample or deliver treatment.

It may be several years before “magnetic tentacle” technology is available in a hospital setting.

The STORM lab at the University of Leeds is revolutionizing the technology used in endoscopic and catheter investigations.

They have created a protype of a low-cost endoscope—used to investigate the upper gastrointestinal tract—which could be used in low to middle income countries where lack of access to expensive equipment is hampering screening programs.

Magnetic technology is also at the heart of a robotic colonoscopy system that is easier for staff to operate and kinder for patients.


Citation:
Engineers develop a ‘magnetic tentacle robot’ to pass into the narrow tubes of the lung (2022, March 21)