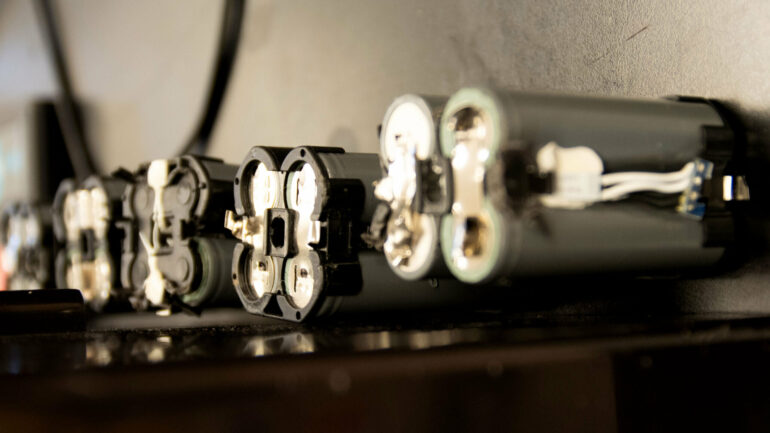 Solid-state batteries could play a key role in electric vehicles, promising faster charging, greater range and longer lifespan than conventional lithium-ion batteries. But current manufacturing and materials processing techniques leave solid-state batteries prone to failure. Now, researchers have uncovered a hidden flaw behind the failures. The next step is to design materials and techniques that account for these flaws and produce next-generation batteries.

In a solid-state battery, charged particles called ions move through the battery within a solid material, in contrast to traditional lithium-ion batteries, in which ions move in a liquid. Solid state cells offer advantages, but local variations or tiny flaws in the solid material can cause the battery to wear out or short, according to the new findings.

“A uniform material is important,” said lead researcher Kelsey Hatzell, assistant professor of mechanical and aerospace engineering and the Andlinger Center for Energy and the Environment. “You want ions moving at the same speed at every point in space.”

In an article published Sept. 1 in the journal Nature Materials, Hatzell and co-authors explained how they used high-tech tools at Argonne National Laboratory to examine and track nano-scale materials changes within a battery while actually charging and discharging the battery. The research team, representing Princeton Engineering, Vanderbilt, and Argonne and Oak Ridge National Labs, examined the grains made up of crystals in the battery’s solid electrolyte, the core part of the battery through which electrical charge moves. The researchers concluded that irregularities between grains can accelerate battery failure by moving ions faster to one region in the battery over another. Adjusting material processing and manufacturing approaches could help solve the batteries’ reliability problems.

Batteries store electrical energy in materials that make up its electrodes: the anode (the end of a battery marked with the minus sign) and the cathode (the end of the battery marked with the plus sign). When the battery discharges energy to power a car or a smartphone, the charged particles (called ions) move across the battery to the cathode (the + end). The electrolyte, solid or liquid, is the path the ions take between the anode and cathode. Without an electrolyte ions cannot move and store energy in the anode and cathode.

In a solid-state battery, the electrolyte is typically either a ceramic or a dense glass. Solid state batteries with solid electrolyte may enable more energy dense materials (e.g. lithium metal) and make batteries lighter and smaller. Weight, volume and charge capacity are key factors for transportation applications such as electric vehicles. Solid-state batteries also should be safer and less susceptible to fires than other forms.

Engineers have known that solid-state batteries are prone to fail at the electrolyte, but the failures seemed to occur at random. Hatzell and co-researchers suspected that the failures might not be random but actually caused by changes in the crystalline structure of the electrolyte. To explore this hypothesis, the researchers used the synchrotron at the Argonne National Lab to produce powerful X-rays that allowed them to look into the battery during operation. They combined X-ray imaging and high-energy diffraction techniques to study the crystalline structure of a garnet electrolyte at the angstrom scale, roughly the size of a single atom. This allowed the researchers to study changes in the garnet at the crystal level.

A garnet electrolyte is comprised of an ensemble of building blocks known as grains. In a single electrolyte (1mm diameter) there are almost 30,000 different grains. The researchers found that across the 30,000 grains, there were two predominant structural arrangements. These two structures move ions at varying speeds. In addition, these differing forms or structure “can lead to stress gradients that lead to ions moving in different directions and ions avoiding parts of the cell,” Hatzell said.

She likened the movement of charged ions through the battery to water moving down a river and encountering a rock that redirects the water. Areas that have high amounts of ions moving through tend to have higher stress levels.

“If you have all the ions going to one location, it is going to cause rapid failure,” Hatzell said. “We need to have control over where and how ions move in electrolytes in order to build batteries that will last for thousands of charging cycles.”

Hatzell said it should be possible to control the uniformity of grains through manufacturing techniques and by adding small amounts of different chemicals called dopants to stabilize the crystal forms in the electrolytes.

“We have a lot of hypotheses that are untested of how you would avoid these heterogeneities,” she said. “It is certainly going to be challenging, but not impossible.”

The article, “Polymorphism of Garnet Solid Electrolytes and Its Implications on Grain Level Chemo-Mechanics,” was published in the journal Nature Materials.