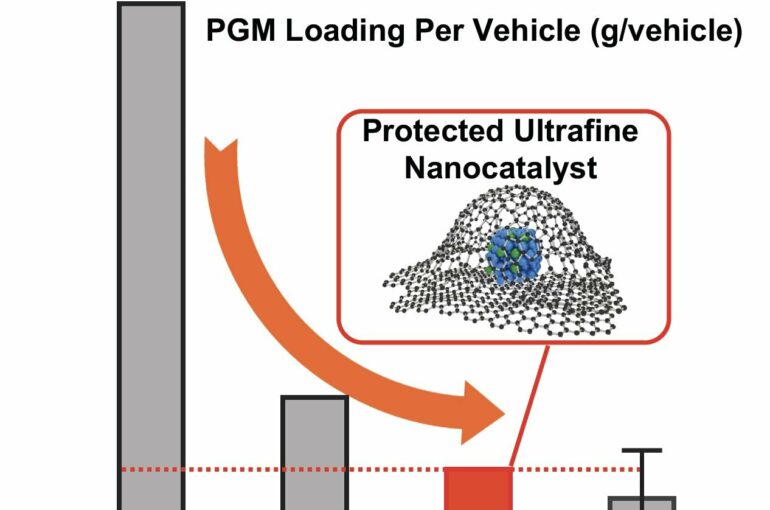 As important as the internal combustion engine has been for societal progress, it is also a major contributor to pollution that damages human health and carbon emissions that help drive the climate crisis. Close to 30% of U.S. carbon emissions come from transportation, and 95% of transportation uses fossil fuels.

One element of a potential remedy would be to power vehicles with hydrogen fuel cells, which emit only water vapor. However, this sustainability solution has an ironic, built-in aspect that’s unsustainable: The catalysts necessary to draw power from hydrogen involve rare and expensive metals such as platinum. In amounts used for today’s technology, widespread adoption would require quantities of these metals beyond what humankind can source.

A recent study in Nature Nanotechnology led by a UCLA professor may represent a turning point. The researchers reported on an approach that enabled them to meet—and beat—ambitious targets for high catalyst performance, high stability and low use of platinum that were set by the Department of Energy. Their record-breaking technology used miniscule crystals of a platinum-cobalt alloy, each embedded in a nanopocket made of graphene, described as a two-dimensional material because it comprises a layer of carbon one atom thick.

“This has never been done before,” said corresponding author Yu Huang, professor and chair of the Department of Materials Science and Engineering at the UCLA Samueli School of Engineering, and a member of the California NanoSystems Institute at UCLA. “This discovery involved some serendipity. We knew we were onto something that might make smaller particles stable, but we didn’t expect it to work this well.”

Today, half of the total global supply of platinum and similar metals is used for catalytic converters in vehicles powered by fossil fuels, a component that make their emissions less noxious. Somewhere between 2 and 8 grams of platinum are required per vehicle. By comparison, current hydrogen fuel cell technology uses about 36 grams per vehicle.

At the lowest load of platinum tested by Huang and her team, each hydrogen-powered vehicle would need only 6.8 grams of platinum.

So how did the researchers get more power out of less platinum? They broke the platinum-based catalyst up into particles an average of 3 nanometers long. A nanometer is one-billionth of a meter, and the nanoparticles were so small that it would take more than 30,000 laid end-to-end to span the thickness of a single sheet of paper. Smaller particles mean more surface area, and more surface area means more real estate where catalytic activity can occur.

There’s a catch, though, that has stymied previous attempts to get better performance by going small with hydrogen fuel cell catalysts. On their own, tinier particles are also far less durable, because they tend to pull off of a surface or crowd together into larger particles.

Huang and her colleagues addressed this limitation by armoring their catalyst particles in the 2D material graphene. Compared to bulk carbon as commonly seen in coal or pencil lead, such thin layers of carbon have surprising capacities, conducting electricity and heat efficiently and showing strength 100 times that of steel at similar thickness.

Their platinum-cobalt alloy was reduced to particles. Before being integrated into a fuel cell, the particles were surrounded by graphene nanopockets, which acted as a sort of anchor to keep the particles from migrating—necessary for the level of durability needed in commercial vehicles. At the same time, the graphene allowed for a tiny gap, of about 1 nanometer, around each catalyst nanoparticle, which meant that key electrochemical reactions could occur.

“It’s sort of intuitive,” Huang said. “If you put a cap on the particle that allows the reaction to go on but confines the particle in that place, it will resolve the durability problem which is however very challenging to achieve at such small scale.”

This latest advance follows a recent collaborative study led by Huang that produced a model for predicting the catalytic activity and durability of a platinum-based alloy that can be used to guide the design of catalysts—the first of its kind. She and her team are working to translate their experimental results into practical technology that can be taken to the market and, hopefully, add to green energy and sustainability efforts.