Hydrogen production and carbon capture in a single step 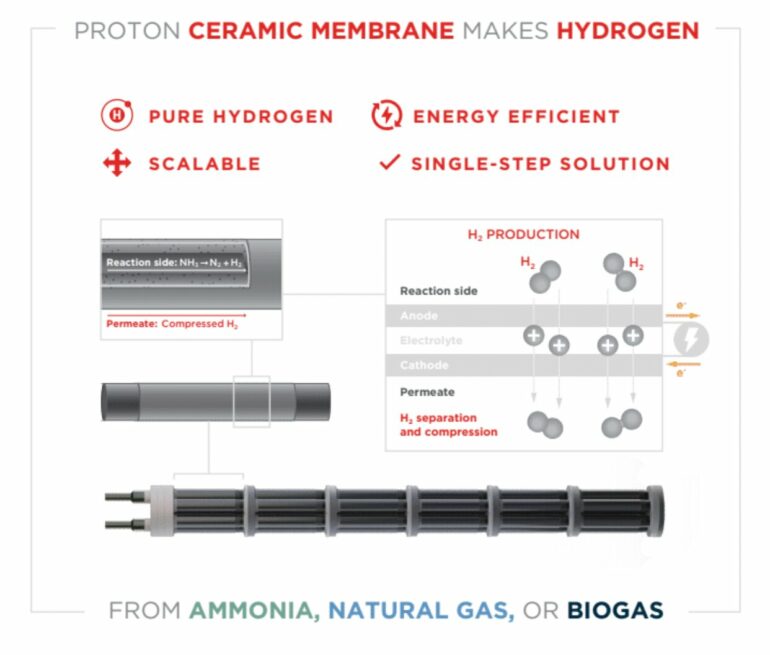 Hydrogen production takes place using natural gas as the raw material, combined with a very special ceramic membrane. Both hydrogen production and CO2 capture are achieved in a single step, which makes the method highly energy efficient. This is why the technology has been the subject of an article in the research periodical Science.

“Currently established methods have energy efficiency ratings of between 70 and 75 percent, but our approach has a potential efficiency of 90 percent,” says Harald Malerød-Fjeld at CoorsTek Membrane Sciences in Oslo. “The end product is compressed hydrogen with a high degree of purity. The ceramic membrane reactor also separates carbon dioxide more efficiently, enabling the greenhouse gas to be easily transported and sequestered,” he says.

CoorsTek Membrane Sciences specializes in the manufacture of ceramic materials for energy conversion and, together with SINTEF, is one of the research partners in this project.

The company’s collaboration with SINTEF has been very close and has generated visible results that have been reported in the most prestigious international periodicals.

Five years ago, Nature published an article about the Norwegian research team. At that time, they had just succeeded in demonstrating the fundamental principles behind producing hydrogen using a new and highly energy-efficient approach. A recent article in Science has now confirmed that the method works, and the team is now working to scale the technology up.

“This is an important step on the road to making hydrogen far more practical as a fuel,” says Malerød-Fjeld. “The process also has a low carbon footprint,” he says.

The research is being carried out at SINTEF’s facilities and laboratories in Oslo, which are co-located with CoorsTek Membrane Sciences’ premises. Senior Research Scientist Thijs Peters at SINTEF is one of the co-authors of the Science article about the new project.

“What is interesting about this technology is that it has both short- and long-term relevance,” says Peters. “It can be used not only for the production of blue hydrogen from natural gas, but also for green hydrogen from biogas or ammonia as part of a ‘more sustainable future,'” he says.

The difference between blue and green hydrogen:

Carbon dioxide is a natural by-product of hydrogen production. If you succeed in capturing and sequestering this CO2, the hydrogen produced is called “blue” hydrogen.

Hydrogen can also be manufactured with the aid of water electrolysis. However, in this process, no CO2 is produced, and if it is also driven using renewable energy, the hydrogen produced is described as “green.”

Generates its own heat

The technology used for producing hydrogen from natural gas is well known and is called steam reforming. Natural gas consists mostly of methane and when this reacts with steam, four hydrogen molecules are obtained for every methane molecule. In order for this reaction to work the steam must be supplied at high temperatures.

A major problem associated with steam reforming is that the process is energy-demanding and takes place in several stages. It also has CO2 as a by-product. The new technology, on the other hand, requires no external heat to drive the steam reforming process. A key to the new process is that heat is produced automatically when the hydrogen is being pumped through the ceramic membrane. In this way the heat is generated exactly where it is needed.

From a cell to a membrane reactor

The smallest building block used in the new method is an electrochemical fuel cell that consists of a six-centimeter long ceramic cylinder. The scaled-up membrane reactor, which is described in the Science article, measures 4 by 40 centimeters. It is made up of 36 such cells that are connected to form a continuous electrical circuit.

The material that connects the cells consists of a glass-ceramic which, as the name suggests, is a composite of both glass and ceramic materials, such as porcelain. This material is then mixed with an electrically conductive metal powder.

According to CoorsTek Membrane Sciences, the development of this material has been key to making the scaling-up process possible. The reactor membrane is then placed in a steel tube that keeps the gases under high pressure.

The secret behind the new technology lies in the material, called a proton-conducting ceramic, that makes up the membrane that removes the hydrogen from the gas mixture.

The technology behind this new ceramic membrane reactor for hydrogen production has been developed by researchers at CoorsTek Membrane Sciences, the University of Oslo and Instituto de Tecnologica Quimica in Valencia, Spain. SINTEF’s role in the project has been to test the reactors and to look into how this new hydrogen production concept can be integrated into a larger energy system.

“It’s very rewarding working so closely together with a client to develop a technology that is so relevant to the green transition,” says Thijs Peters. “One learns a great deal from such close working relationships with people in so many different fields,” he says.

Commercialization in the next two years

The next stage in the development of this technology is already well underway. A pilot facility has been established in Dhahran in Saudi Arabia. The generator installed at this facility, which is five times bigger than the one described in the Science article, has also been shown to work.

“We’re certain that this technology can be scaled up even further,” says Harald Malerød-Fjeld. “Our hope is that the first industrial installation of a commercial hydrogen production system can take place in the next two to three years,” he says.

SINTEF is continuing to collaborate with CoorsTek Membrane Sciences on the development of larger membrane reactors, and both organizations are working on other projects related to materials technology.