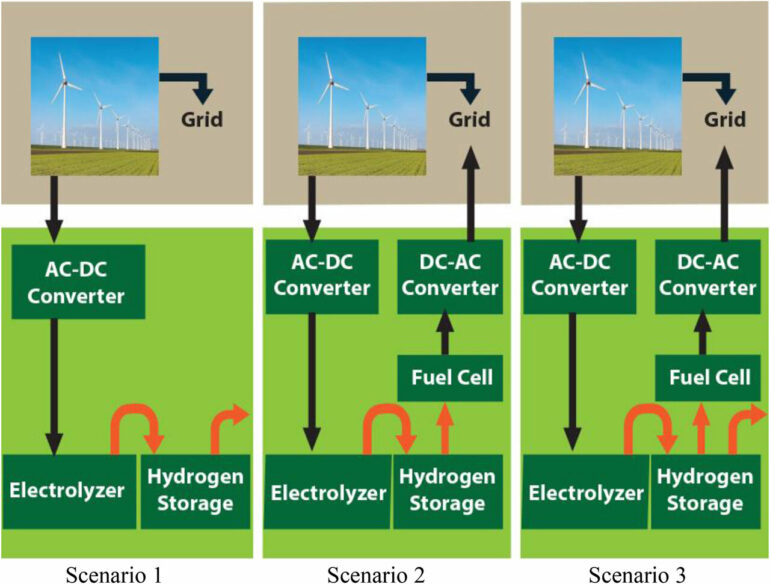 Capturing the potential profits and jobs offered by a growing hydrogen industry may need as much innovation in regulatory agencies as it does in the research laboratories, according to new research from The University of Texas at Austin. The work highlights the increasing complexity and interconnected nature of energy markets as disparate regulatory agencies push for increased use of clean energy sources.

In the paper, published recently in the International Journal of Hydrogen Energy, the researchers studied a wind farm in west Texas to find ways wind farm owners can enhance profitability by making hydrogen. They examined various scenarios, including profit points of selling electricity versus hydrogen and storing hydrogen to sell either hydrogen or hydrogen-derived electricity as the markets change.

These decisions are further complicated by what the researchers say are a patchwork of disparate rules and regulations lacking the level of connectivity necessary for success. The researchers aim to provide insights to help industry and governments make investment decisions that are beneficial to society and economically sustainable.

“It’s a complex system to sort through and we don’t have clear answers yet,” said Mike Lewis, senior research scientist at UT Austin’s Center for Electromechanics (CEM), leader of the hydrogen research and one of the authors on the paper. “Even in that situation, the research shows it is possible for some wind farm owners to enhance profitability to make money in a hydrogen economy.”

The hydrogen vision is to convert solar and wind power to hydrogen in real time, without producing carbon. The stored hydrogen is available 24/7, solving the problem of dispatchable renewable energy. Today, hydrogen’s main uses are fertilizer manufacturing and industrial processing. However, it has tremendous potential to decarbonize transportation, the grid, industrial processes and other sectors.

What it comes down to is a math problem. The U.S. government wants to make hydrogen cheaper, bringing cost down to $1 per kilogram within a decade. For the producer profiled in this paper, it is not profitable to convert its wind energy to hydrogen and sell it when the price of hydrogen is less than $3.75 per kilogram. Below that price, the electricity production tax credit makes the sale of electricity more profitable.

In the U.S. and globally, companies are investing in the production, storage, transportation and use of hydrogen to more than double the approximately $160 billion annual global hydrogen market by the end of the decade. Adding to U.S. industry initiatives, the federal government is investing $10 billion through the Infrastructure Investment and Jobs Act and the Inflation Reduction Act. Included in these initiatives is a new tax credit of up to $3 per kilogram for hydrogen production, making hydrogen sales more competitive with electricity sales.

The U.S. government investment in hydrogen is consistent with government actions in Europe and Asia. Over time, government agencies have subsidized different energy sources with the goal of boosting production. It happened with oil and gas, electric, and now it is happening with wind and solar, as well as hydrogen.

At the same time, an explosion of technology has connected these once siloed markets. What is necessary for the continued growth of clean energy sources, the researchers say, is a re-imagined regulatory framework that does not pit energy sources against each and other and finds a balance that serves the nation.

“We have developed many different regulatory and market structures and hydrogen tends to lay on the top of all of them,” said Robert Hebner, CEM director and corresponding author on the paper, said. “It will require serious rethinking within the states and federal government to make these systems work today. It may take a lot more than a Band-Aid. It may need major surgery.”

In AIApps and WebSmartphones
on 21 April 20213 min read