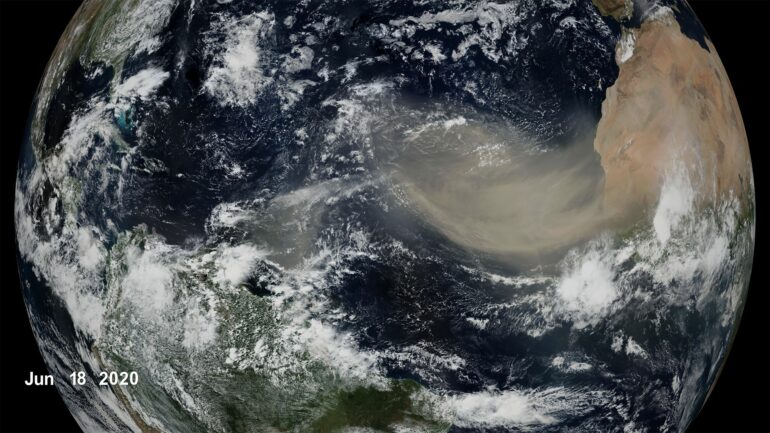 A new study shows that global atmospheric dust—microscopic airborne particles from desert dust storms—has a slight overall cooling effect on the planet that has hidden the full amount of warming caused by greenhouse gases.

The UCLA research, published today in Nature Reviews Earth and Environment, found that the amount of desert dust has grown roughly 55% since the mid-1800s, which increased the dust’s cooling effect.

The study is the first to demonstrate the overall cooling effect of atmospheric desert dust. Some effects of atmospheric dust warm the planet, but because other effects of dust actually counteract warming—for example by scattering sunlight back into space and dissipating high clouds that warm the planet—the study calculated that dust’s overall effect is a cooling one.

“We show desert dust has increased, and most likely slightly counteracted greenhouse warming, which is missing from current climate models,” said Kok, who studies how particulate matter affects the climate. “The increased dust hasn’t caused a whole lot of cooling—the climate models are still close—but our findings imply that greenhouses gases alone could cause even more climate warming than models currently predict,” he said.

Kok compared the revelation to discovering, while driving a car at high speed, that the vehicle’s emergency brake had been partly engaged. Just as fully releasing the brake could cause the car to move even faster, a stop to the increase in dust levels could slightly speed up global warming.

While atmospheric desert dust levels have increased overall since pre-industrial times, the trend has not been steady—there have been upticks and declines along the way. Because there are so many natural and human-influenced variables that can cause dust levels to increase or decrease, scientists cannot accurately project how the amounts of atmospheric dust will change in the coming decades.

Some of the microscopic airborne particles created by burning fossil fuels also temporarily contribute to cooling, Kok said. But while scientists have spent decades determining the consequences of these human-made aerosols, the precise warming or cooling effect of desert dust remained unclear until now. The challenge researchers faced was to determine the cumulative effect of the known warming and cooling effects of dust.

In addition to atmospheric interactions with sunlight and cloud cover, when dust drops back to earth, it can darken snow and ice by settling on them, making them absorb more heat. Dust also cools the planet by depositing nutrients like iron and phosphorus. When those nutrients land in the ocean, for example, they support the growth of phytoplankton that take up carbon dioxide from the atmosphere, thereby causing a net cooling effect, Kok said.

“We want climate projections to be as accurate as possible, and this dust increase could have masked up to 8% of the greenhouse warming,” Kok said. “By adding the increase in desert dust, which accounts for over half of the atmosphere’s mass of particulate matter, we can increase the accuracy of climate model predictions. This is of tremendous importance because better predictions can inform better decisions of how to mitigate or adapt to climate change.”

The researchers used satellite and ground measurements to quantify the current amount of microscopic mineral particles in the air. They determined that there were 26 million tons of such particles globally—equivalent to the weight of about 5 million African elephants floating in the sky.

They next looked at the geologic record, gathering data from ice cores, marine sediment records and samples from peat bogs, which all show the layers of atmospheric dust that had fallen from the sky. Samples from around the world showed a steady increase in desert dust.

Dust can increase as a result of drier soils, higher wind speed and human land-use changes—diverting water for irrigation and turning marginal desert regions into grazing and agricultural land, for example. While increases in dust levels due to those types of land-use changes have taken place primarily on the borders of the world’s largest deserts, like the Sahara and Sahel in Africa and Asia’s Gobi desert, Kok said, similar changes have taken place in California’s Owens Lake and are occurring now in the Salton Sea, also in California.

But the factors that account for increased dust levels are not clear-cut or linear, Kok said, and whether the amounts of desert particulates will increase, decrease or remain relatively flat is unknown.

Kok emphasized that while the increase in atmospheric dust has somewhat masked the full potential of greenhouse gases to warm the climate, the findings don’t show that climate models are wrong.

“The climate models are very useful in predicting future climate change, and this finding could further improve their usefulness,” Kok said.