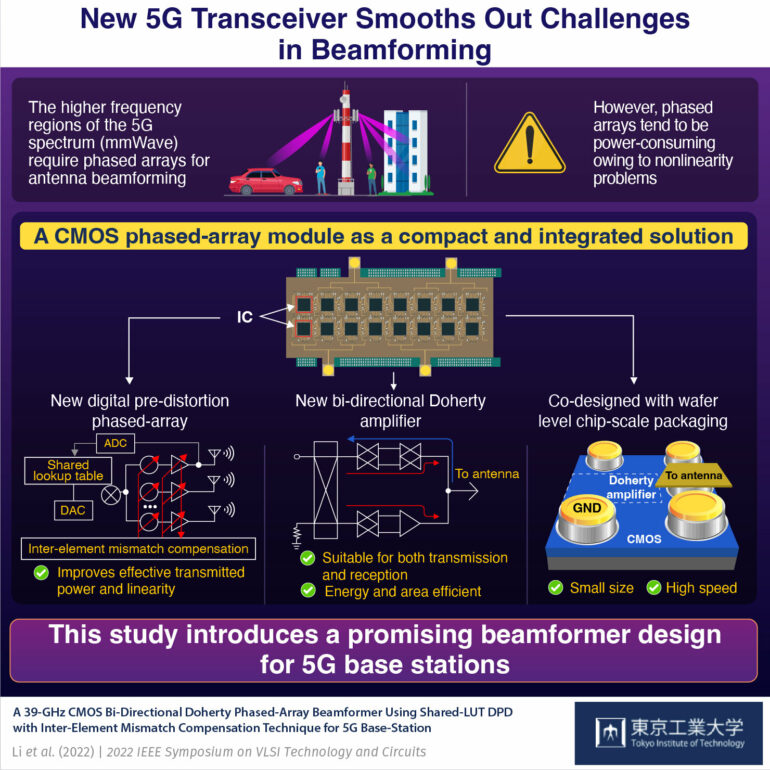 5G networks are becoming more prevalent worldwide. Many consumer devices that support 5G are already benefiting from increased speeds and lower latency. However, some frequency bands allocated for 5G are not effectively utilized owing to technological limitations. These frequency bands include the New Radio (NR) 39 GHz band, but actually span from 37 GHz to 43.5 GHz, depending on the country. The NR band offers notable advantages in performance over other lower frequency bands 5G networks use today. For instance, it enables ultra-low latency in communication along with data rates of over 10 Gb/s and a massive capacity to accommodate several users.

However, these feats come at a cost. High-frequency signals are attenuated quickly as they travel through space. It is, therefore, crucial that the transmitted power is concentrated in a narrow beam aimed directly at the receiver. This can, in principle, be achieved using phased-array beamformers, transmission devices composed of an array of carefully phase-controlled antennas. However, working at high frequency regions of the NR band decreases the efficiency of power amplifiers as they tend to suffer from nonlinearity issues, which distort the transmitted signal.

To address these issues, a team of researchers led by Professor Kenichi Okada from Tokyo Institute of Technology (Tokyo Tech), Japan, have recently developed, in a new study, a novel phased-array beamformer for 5G base stations. Their design adapts two well-known techniques, namely the Doherty amplifier and digital predistortion (DPD), into a mmWave phased-array transceiver, but with a few twists. The researchers will present their findings in the upcoming 2022 IEEE Symposium on VLSI Technology and Circuits.

The Doherty amplifier, developed in 1936, has seen a resurgence in modern telecommunication devices owing to its good power efficiency and suitability for signals with a high peak-to-average ratio (such as 5G signals). The team at Tokyo Tech modified the conventional Doherty amplifier design and produced a bi-directional amplifier. What this means is that the same circuit can both amplify a signal to be transmitted and a received signal with low noise. This fulfilled the crucial role of amplification for both transmission and reception.

“Our proposed bidirectional implementation for the amplifier is very area-efficient. Additionally, thanks to its co-design with a wafer-level chip-scale packaging technology, it enables low insertion loss. This means that less power is lost as the signal traverses the amplifier,” explains Professor Okada.

Despite its several advantages, however, the Doherty amplifier can exacerbate nonlinearity problems that arise from mismatches in the elements of the phased-array antenna. The team addressed this problem in two ways.

First, they employed the DPD technique, which involves distorting the signal before transmission to effectively cancel out the distortion introduced by the amplifier. Their implementation, unlike the conventional DPD approaches, used a shared look-up table (LUT) for all antennas, minimizing the complexity of the circuit.

Second, they introduced inter-element mismatch compensation capabilities to the phased array, improving its overall linearity. “We compared the proposed device with other state-of-the-art 5G phased-array transceivers and found that, by compensating the inter-element mismatches in the shared-LUT DPD module, ours demonstrate a lower adjacent channel leakage and transmission error,” remarks Professor Okada. “Hopefully, the device and techniques described in this study will let us all reap the benefits of 5G NR sooner.”


Citation:
Introducing a transceiver that can tap into the higher frequency bands of 5G networks (2022, June 15)