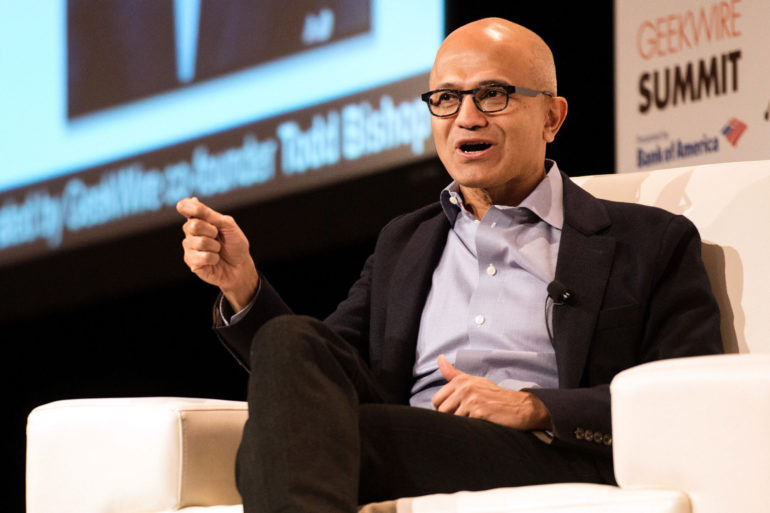 With respect to guidance, Microsoft expects $39.5 billion to $40.4 billion in fiscal second-quarter revenue. The middle of that range, at $39.95 billion, implies 8% annualized growth, and it’s below the Refinitiv consensus estimate of $40.43 billion.

In the fiscal first quarter, Microsoft revenue grew 12% on an annualized basis, down from 13% growth in the prior quarter, according to a statement.

But one of the fastest-growing parts of Microsoft, the Azure public cloud for hosting applications and websites, grew 48%, accelerating from 47% in the prior quarter. Microsoft doesn’t disclose revenue from Azure in dollars. Analysts had expected around 44% growth.

Microsoft’s Intelligent Cloud segment, featuring Azure, Enterprise Services, GitHub and server products such as SQL Server and Windows Server, contributed $12.99 billion in revenue, up 20% year over year and more than the $12.73 billion consensus among analysts polled by FactSet.

The Productivity and Business Processes segment, which includes Dynamics, LinkedIn and Office, delivered $12.32 billion in revenue. That’s up 11% and higher than the $11.78 billion FactSet consensus. Teams, one part of the Office 365 productivity app bundle, now has over 115 million daily active users, up from 75 million in April.

Revenue from the More Personal Computing segment, containing search advertising, Surface, Windows and Xbox, came to $11.85 billion. That means the segment’s revenue grew 6% year over year, and it was above the $11.18 billion consensus among analysts surveyed by FactSet. Licensing revenue from Windows device makers declined 5% in the quarter, and licensing revenue for commercial devices in particular fell some 22%, compared with the 4% decrease in the prior quarter, the worst performance in more than five years. Technology industry research company Gartner estimated that third-quarter PC shipments grew 3.7% year over year and saw the fastest growth in the U.S. in a decade.

The Commercial Cloud collection of products, including Azure, Dynamics 365, commercial LinkedIn and Office 365 services, added up to $15.2 billion in revenue, representing almost 41% of total revenue, up from around 38% in the prior quarter. Commercial Cloud gross margin was 71%, passing the 70% mark for. the first time.

How much economic damage would be done if a cyberattack took out the internet?

This is the first quarter Microsoft benefits from an accounting change that extended the useful life of its server equipment from two years to four years.

In the quarter Microsoft announced the $7.5 billion acquisition of Zenimax Media, the company behind video game franchises such as Doom and Quake, and Microsoft failed to make a deal involving the video-sharing app TikTok.

In January, Microsoft announced a goal to be carbon-negative, which would involve removing more carbon than it emits, by 2030. In the fiscal first quarter Microsoft provided an update, saying it had extended an internal carbon tax to all parts of its operations and updated its code of conduct for suppliers so that suppliers will have to specify their emissions.

WATCH: Microsoft partners with SpaceX to launch Azure Space—Here’s what to know about the initiative