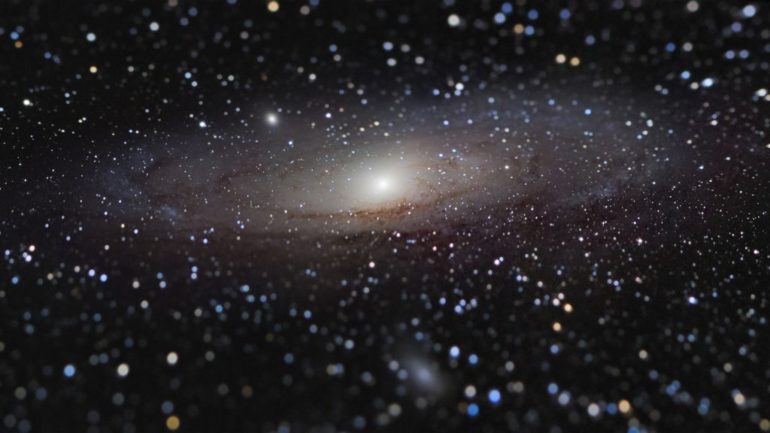 The Andromeda galaxy lies 2 million light-years from Earth, but it looks close enough to touch in an image that took home the top prize in the Royal Observatory Greenwich’s Insight Investment Astronomy Photographer of the Year 2020 competition.

French photographer Nicolas Lefaudeux used a technique called tilt-shift — positioning a camera’s lens in a way that manipulates the depth of field in an image — to bring our closest neighboring galaxy closer still. His photo blurs the foreground and background while leaving the center sharply in focus, making the galaxy appear startlingly close, almost as though the observer could reach into the photo and grab it.

Contest judges selected Lefaudeux’s photo, titled “Andromeda Galaxy at Arm’s Length?”, from thousands of submissions, naming it the winner in the “Galaxies” category, as well as the competition’s overall best photo. Lefaudeux captured the image in Forges-les-Bains, Île-de-France, using a 3D-printed custom camera attachment to achieve the tilt-shift visual effect; “the blur created by the defocus at the edges of the sensor gives this illusion of closeness to Andromeda,” Royal Museums Greenwich representatives said in a statement.

The cleverness of Lefaudeux’s technique made the photo “truly magical,” judge and photographer Ed Robinson said in the statement. Lefaudeux’s illusion of closeness in the galaxy seemed especially poignant right now, as many people around the world are practicing social distancing due to the COVID-19 pandemic, Robinson said.

Another standout photo, “Cosmic Inferno” captured by photographer Peter Ward of Australia, was the winner in the “Stars and Nebulae” category. In his image of NGC 3576, a bright nebula in the Sagittarius arm of the Milky Way galaxy, Ward used software to strip the surrounding stars from the view, leaving only the flaming tendrils of the nebula. Ward then mapped the nebula to a fiery false-color palette — a choice intended to raise awareness of recent wildfires in his home country Down Under, he said in a statement.

Cooler palettes dominated in other prizewinning photos, such as the glowing aurora greens and blues in “The Green Lady,” captured in Norway by photographer Nicholas Roemmelt; and the shimmering pinks and pale yellows in “Painting the Sky,” photographed in Finnish Lapland by Thomas Kast. The winning photos for 2020 were announced yesterday (Sept. 10) in an awards ceremony that Royal Museums Greenwich livestreamed on YouTube and on Facebook, and can be viewed on the contest website.

Based in the U.K. and open to photographers of all levels, the Royal Observatory Greenwich’s international contest celebrates outstanding space photography. Judges award prizes for spectacular images of celestial objects such as the moon, the sun, auroras and galaxies, and for photos that juxtapose people (or that show the influence of humans) alongside the night sky. Other categories elevate photographers who are younger than 15; images that combine elements of art and science; and entries that demonstrate innovative image processing of open source data, according to the contest website.

“From vast aurora to fiery nebulae to an intimate look at our closest galactic neighbor, there really is something for everyone,” contest judge Steve Marsh, an art editor for BBC Sky at Night Magazine, said in a statement.

Prizewinning photos from last year’s contest are currently on display at the National Maritime Museum in the U.K., where they will remain until Sept. 13, and the 2020 contest winners will be on public view from Oct. 23 until Aug. 8, 2021, according to the Royal Museums Greenwich website.