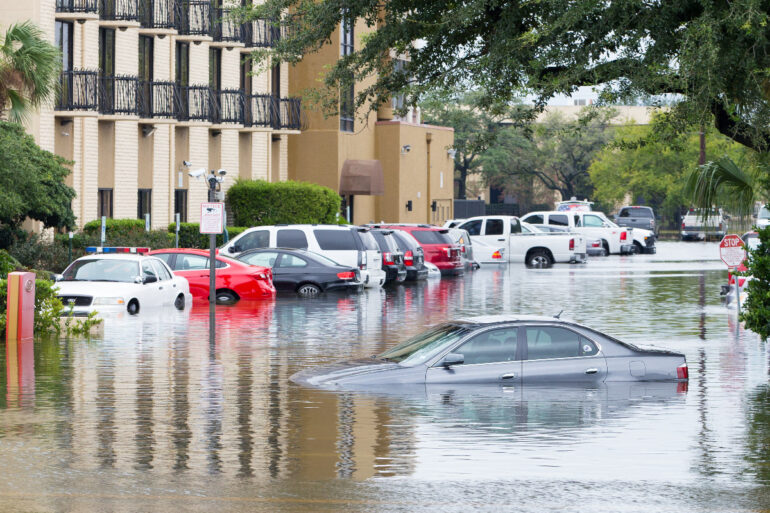 A University of Central Florida researcher has developed technology that could prevent electric vehicle fires, like those caused by saltwater flooding from Hurricane Ian.

The technology, an aqueous battery, replaces the volatile and highly flammable organic solvents found in electric vehicle lithium-ion batteries with saltwater to create a battery that is safer, faster charging, just as powerful and won’t short circuit during flooding.

The work is detailed in a new study in Nature Communications.

“During Hurricane Ian, a lot of electric cars caught fire after they were soaked in floodwater,” says Yang Yang, an associate professor in UCF’s NanoScience Technology Center who led the research. “That is because the saltwater corrodes the battery and causes a short circuit, which ignites the flammable solvents and other components. Our battery uses saltwater as an electrolyte, eliminating the highly volatile solvents.”

Also key to the battery’s design is its novel, nano-engineering that allows the battery to overcome limitations of previous aqueous batteries, such as slow charging times and poor stability.

The UCF-designed battery is fast charging, reaching full charge in three minutes, compared to the hours it takes lithium-ion batteries.

Yang is an expert in developing materials for renewable energy devices such as batteries with improved safety.

The issue of electric vehicle fires after saltwater flooding surfaced during Hurricane Sandy in 2012 and Hurricane Isaias in 2020.

As a result, the U.S. Fire Administration and the National Highway Traffic Safety Administration have issued special guidance for responding to electric vehicle fires caused by saltwater flooding.

The fires require copious amounts of water to douse, with the International Association of Fire Chiefs recommending firefighters secure a continuous and sustainable water supply of 3,000 to 8,000 gallons.

At least 12 electric vehicle fires were reported in Collier and Lee counties in Florida after Hurricane Ian, where many cars were submerged at least partially in saltwater, according to the US. Fire Administration.

By using saltwater as the battery’s liquid electrolyte, the UCF researchers were able to use naturally occurring metal ions found in the saltwater, such as sodium, potassium, calcium and magnesium, to create a dual-cation battery that stores more energy. This implementation allowed them to overcome the sluggishness of previous single-cation aqueous battery designs.

The novel, nano-engineered surface, which looks like a birds-eye-view of a forest, allows the researchers to precisely control electrochemical reactions, thereby increasing the battery’s stability and quick charging ability.

“These batteries using the novel materials developed in my lab will remain safe even if they are used improperly or are flooded in saltwater,” Yang says. “Our work can help improve electric vehicle technology and continue to advance it as reliable and safe form of travel.”