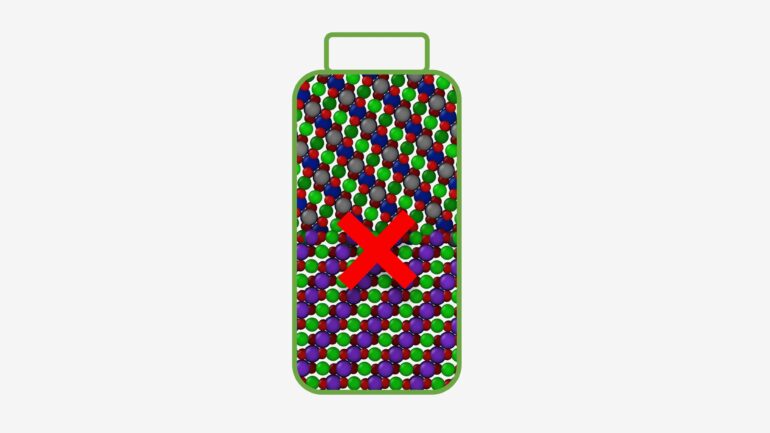 Researchers at the U.S. Department of Energy’s (DOE) Argonne National Laboratory have a long history of breakthrough discoveries with lithium-ion batteries. Many of these discoveries have focused on a battery cathode known as NMC, a nickel-manganese-cobalt oxide. Batteries with this cathode now power the Chevy Bolt.

Argonne researchers have made another breakthrough with the NMC cathode. The team’s new structure for the cathode’s micro-sized particles could lead to longer-lasting and safer batteries able to operate at very high voltage and power vehicles for longer driving ranges. A paper on this research appeared in Nature Energy.

“The present-day NMC cathode has posed a major barrier to operation at high voltage,” said Guiliang Xu, assistant chemist. With charge-discharge cycling, performance rapidly declines due to cracks forming in the cathode particles. For several decades, battery researchers have been seeking ways to eliminate these cracks.

A different approach to avoid this cracking involves single-crystal particles. Electron microscopy of these particles indicated they have no boundaries.

The problem the team faced was that cathodes made from both coated polycrystals and single crystals still formed cracks with cycling. So, they subjected these cathode materials to extensive analyses at the Advanced Photon Source (APS) and Center for Nanoscale Materials (CNM), DOE Office of Science user facilities at Argonne.

Different X-ray analyses were carried out at five APS beamlines (11-BM, 20-BM, 2-ID-D, 11-ID-C and 34-ID-E). It turned out that what scientists had believed were single crystals, as evidenced by electron and X-ray microscopy, actually had boundaries inside. Scanning and transmission electron microscopies at CNM verified the finding.

“When we look at the surface morphology of these particles, they look like single crystals,” said physicist Wenjun Liu. “But when we use a technique called synchrotron X-ray diffraction microscopy and other techniques at the APS, we find boundaries hiding inside.”

Importantly, the team developed a method for producing boundary-free single crystals. Testing of small cells with such single-crystal cathodes at very high voltage showed a 25% increase in energy storage per unit volume, with almost no loss of performance over 100 cycles of testing. By contrast, over the same cycle life, the capacity declined by 60% to 88% in NMC cathodes composed of single crystals with many internal boundaries or with coated polycrystals.

Calculations at the atomic scale revealed the mechanism behind the capacity decline in the cathode. According to nanoscientist Maria Chan in CNM, compared to the regions away from them, boundaries are more vulnerable towards the loss of oxygen atoms when the battery is being charged. This oxygen loss leads to degradation with cell cycling.

In CompaniesTech
on 6 October 20212 min read

“We now have guidelines that battery manufacturers can use to prepare cathode material that is boundary free and works at high voltage,” said Khalil Amine, an Argonne Distinguished Fellow. “And the guidelines should apply to other cathode materials besides NMC.”