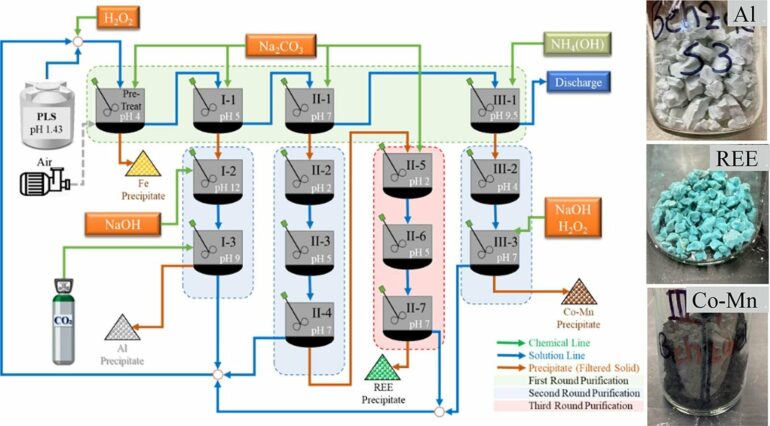 Critical minerals, including rare earth elements, are used to power devices like smartphones and computers and are essential to our nation’s economy and national security. Penn State’s Center for Critical Minerals has developed a new purification process that extracts mixed rare earth oxides from acid mine drainage and associated sludges at purities of 88.5%

Critical minerals (CMs), including the 17 rare earth elements (REEs), are used in many common household products like smartphones and computers, and in many commercial products such as electric vehicles, batteries and solar panels. Demand for them has skyrocketed, and they are classified as critical because they have high economic importance, high supply risk, and their absence would have significant consequences on the economic and national security of the United States.

Acid mine drainage (AMD) and associated solids and precipitates resulting from AMD treatment have been found to be viable sources of multiple CMs, including REEs, aluminum, cobalt and manganese.

The U.S. Department of Energy (DOE) has funded efforts to demonstrate both the technical feasibility and economic viability of extracting, separating and recovering REEs and CMs from U.S. coal and coal by-product sources, with the goal of achieving mixed rare earth oxides from coal-based resources with minimum purities of 75%.

“We have been working to develop strategies to recover CMs and REEs from these waste streams and have achieved a milestone of 88.5% grade REEs,” said Sarma Pisupati, professor of energy and mineral engineering and director of the Center for Critical Minerals at Penn State. “The current target set by the DOE for achieving mixed rare earth oxides is 75% and we have surpassed that target.”

Acid mine drainage and associated sludge material representing the Lower Kittanning coal bed were obtained from three treatment sites operated by the Pennsylvania Department of Environmental Protection and were characterized and evaluated for recovery of multiple critical minerals.

A novel purification process, based on a previously developed three-stage AMD treatment process, was designed to recover high-grade aluminum, REE, cobalt and manganese products from the sludge materials through aqueous processing with multiple cleaner steps and precise control of the process parameters, according to the researchers.

“The extraction of REEs and CMs directly from AMD eliminates the need for the dissolution of sludge and associated costs of reagents and processing, resulting in more sustainable waste disposal practices with low cost,” said Mohammad Rezaee, assistant professor of mining engineering at Penn State and co-author on the study. “We have demonstrated that we are able to turn these waste streams, which have been of environmental concerns for decades, into valuable resources, so this is a win-win for the environment, the commonwealth and the nation.”

AMD is typically treated by adding lime or other chemicals to raise the pH to 7.

“Typically, AMD is neutralized through the addition of various alkaline chemicals,” said Rezaee, who also holds the Centennial Career Development Professorship in Mining Engineering. “As the pH of the AMD increases during the treatment process, metals precipitate as metal hydroxides or other complexes.”

In the new system, the pH is still raised to a pH of 7, but in stages.

“Instead of adding sodium hydroxide, calcium hydroxide or lime all at once to raise the pH, we are raising it in stages,” said Pisupati. “The advantage of this method is that it allows certain minerals to precipitate out at different pH levels. If we add in our base all at once and bring the pH to 7, all these things will precipitate at the same time. Then we would need to go back and separate them.”

“Our challenge was that we could not get 100% of the iron and aluminum removed; there was a little bit of residue in the REE concentration,” said Pisupati. “Even if you have only 1% of aluminum content in the mixture it dominates, and your quality of rare earths will not be as pure. This was addressed in the new purification process.”

In the purification process, precipitates that were removed are put back though the cycle to remove iron, aluminum and other residues.

In Apps and WebCompaniesCybersecurityGamingSmartphones
on 20 May 202111 min read

“In the purification process, we go through the cycle all over again, going back to a pH of 3 or 3.5 and starting all over,” said Pisupati. “We are getting rid of the other residues slowly, maybe two times or three times through the cycle, to increase the REE purity. In our previous research we were at about 17% to 18% grade, so this is a significant accomplishment.”

Recoveries of more than 99% for the target elements were achieved with the design of a recycling load. In the original three-stage precipitation process, the cobalt and manganese precipitates had a concentration of 0.85% and 23%, respectively. As a result of the purification process, their concentrations were increased to 1.3% and 43%, respectively.

The research was published in Minerals Engineering.