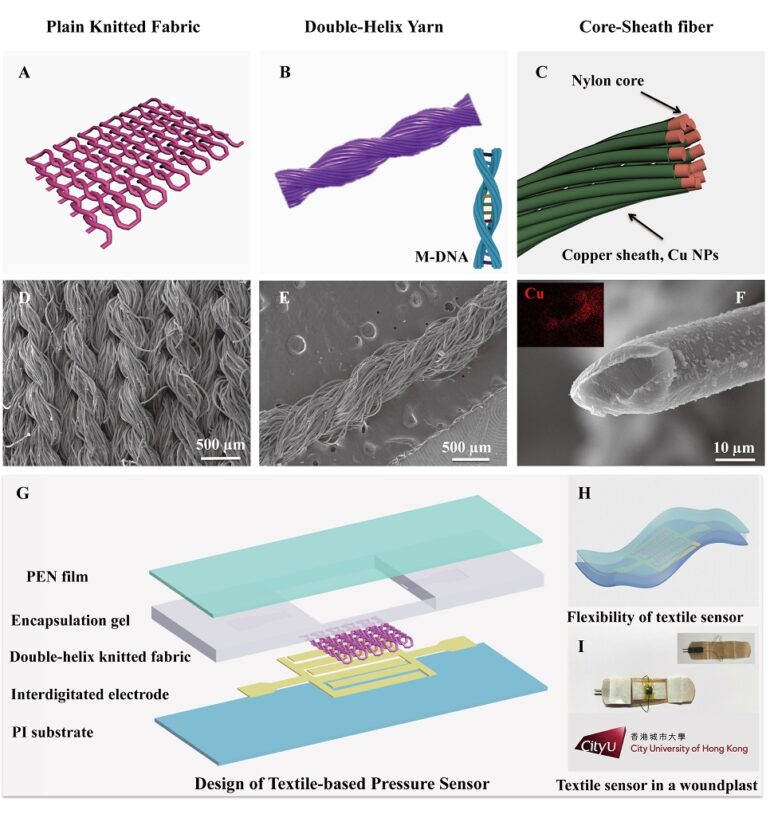 Textiles woven with yarn are used in remote medical diagnosis with intelligent electronic sensing technology. However, the derived inconsistent signals are one of the problems yet to be solved. A research led by a scholar from City University of Hong Kong (CityU) was inspired by the structure of DNA and found that textiles woven with double helix structure can help overcome the said challenge. The team has further developed a flexible piezoresistive sensor to detect human pulse. The sensor responds swiftly, recovers quickly after being pressed, and its signal is stable. The team expects the sensor can be introduced to the growing medical and healthcare market.

The research team is led by Professor Hu Jinlian, Professor of the Department of Biomedical Engineering and Director of Laboratory of Wearable Materials for Healthcare of CityU. The research results have been published in the academic journal Advanced Materials under the title “Ultrafast-Response/Recovery Flexible Piezoresistive Sensors with DNA-Like Double Helix Yarns for Epidermal Pulse Monitoring.”

“Textile-based sensors have multiple advantages, such as flexibility, stretchability and breathability, so they are used to make flexible piezoresistive sensors,” said Professor Hu. However, textile sensors generally have hysteresis, meaning that it would be difficult for the sensors to recover once they have changed shapes. In addition, the signals derived from general textile sensors are inconsistent, so the resulted measurements are often non-repeatable, which hinders their application.

To solve the problem of hysteresis, a conventional strategy is to integrate elastic polymers into the textile. Instead, Professor Hu’s team started with the structure of the yarn itself. They made yarns with a double helix structure similar to that of DNA and then made fabrics by twisting two pieces of yarns together. “This method skilfully twists two pieces of yarn into one, resulting in a stable bonding force between the two pieces of yarn, so that the fabric will not fall loose and can quickly recover when deformed,” explained Professor Hu.

Professor Hu pointed out that the key reason for hysteresis of general textile sensors is that after the yarn is compressed and deformed, the yarn cannot recover after the mutual friction. However, the yarn made by her team adopts the double helix structure, which tightens the yarns closely together and reduces the slip caused by friction, so as to alleviate the hysteresis.

On this basis, the team further developed a textile-based flexible piezoresistive sensor with ultrafast response and recovery ability, which was used in the experiment of epidermal pulse monitoring.

The textile-based flexible piezoresistive sensor developed by the team consists of five layers. The fabric in the middle layer, which was woven from yarn with double helix structure, was placed on a layer of electrode and the bottom layer of polyimide (PI) substrate. The researchers then sealed the three layers with gel, and covered the top surface with a layer of polyethylene naphthalate (PEN) film.

After the textile-based flexible piezoresistive sensor is powered on, the fabric on the electrode layer deformed by the epidermal pulse beats will generate resistance and derive different signals according to the change of the pulse. The team’s experiments confirmed that the textile-based flexible piezoresistive sensor can detect epidermal pulse on the neck and the wrist, and the signals of wrist pulse monitored before and after exercise are different. In addition, the signals of wrist pulse collected from normal women and men diagnosed with sinus bradycardia were also significantly different.

“Compared with other textile sensors, our device has superior sensitivity. It can sense the pressure of a grain weighing only nine milligrams. In addition, the sensor responds so fast that it can generate a signal in only two milliseconds (ms), and it takes just one ms to recover after the press from a beat of the pulse,” commented Professor Hu. The textile-based flexible piezoresistive sensor has been tested and proved to be durable that it can be reused 6,000 times while maintaining 95% of its initial performance. “Most importantly, we have solved the problem of hysteresis of general textile sensors. The experimental results show that the sensor derives consistent signals and demonstrate excellent and balanced performance in all aspects,” Professor Hu concluded.

Professor Hu described this set of new and efficient textile-based flexible piezoresistive sensors as an innovation in the technology of epidermal pulse detection. It can be flexibly assembled on wearable devices and help promote the modernisation of pulse palpation in traditional Chinese medicine.