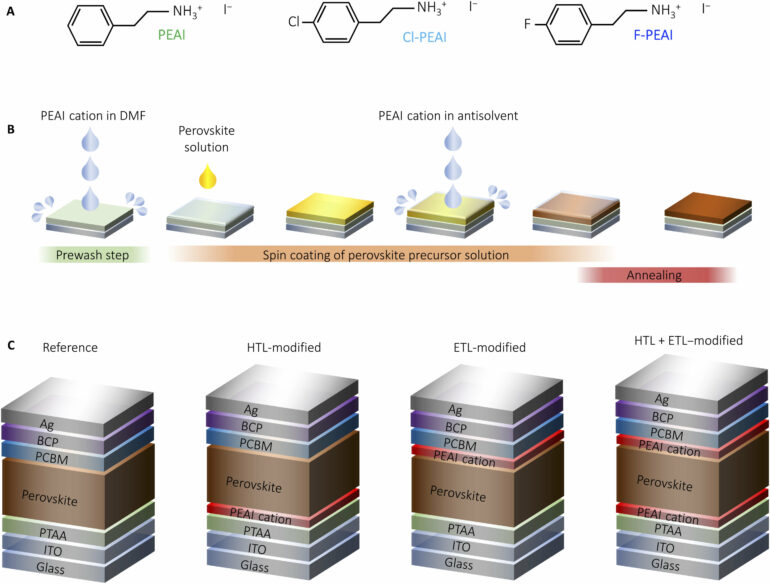 In a joint effort between Pavia University (Italy) and the Center for Advancing Electronics Dresden at Technische Universität Dresden (Germany), researchers developed a novel method to fabricate lead halide perovskite solar cells with record efficiency. Results have been published in Science Advances.

Metal halide perovskites have been under intense investigation over the last decade due to the remarkable rise in their performance in optoelectronic devices such as solar cells or light-emitting diodes. The most efficient devices, fabricated in the so-called ‘standard architecture’ commonly include processing steps performed at high temperature, thus increasing their energy payback time and limiting the possibility to integrate them in emerging applications such as flexible and wearable electronics. An alternative device architecture—termed the ‘inverted architecture’—eliminates the need for high temperature processing, but generally leads to a lower photovoltaic efficiency.

“Importantly, the improvement in performance is accompanied by an increase in device stability,” says Prof. Giulia Grancini, an associate professor of chemistry at the University of Pavia. Considering that stability remains one of the key hurdles for the commercialization of perovskite solar cells, the simultaneous improvement of efficiency and stability is particularly promising.

“The fact that our devices are fabricated at low temperatures of less than 100° C and that our approach is fully applicable to the fabrication of large area devices takes us one step closer to large-scale utilization of perovskite solar cells” adds Prof. Yana Vaynzof, Chair for Emerging Electronic Technologies at the Institute for Applied Physics and Photonic Materials and the Center for Advancing Electronics Dresden (cfaed).