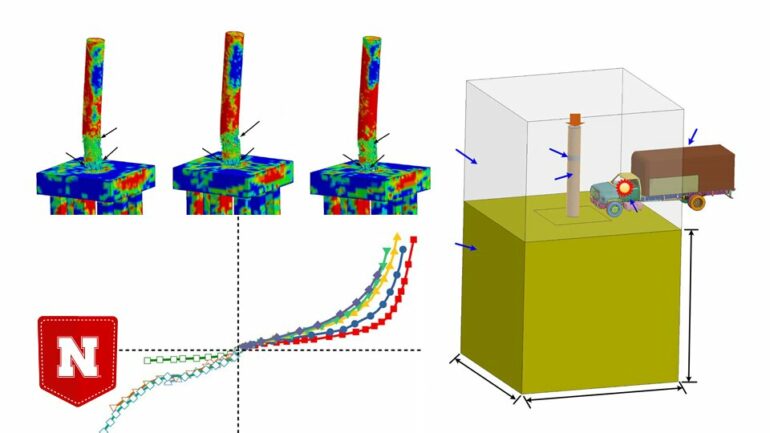 The columns that support highway bridges, or overpasses, often sit next to roads running beneath those bridges, making them vulnerable to collisions from high-speed traffic.

Those collisions occasionally involve explosions, as in 2014, when a tanker truck struck a bridge support in Tennessee. The impact of the collision and the air blast from the explosion combined to collapse part of the bridge. But because that collision-blast combination is considered rare, highway bridges are not often engineered to withstand it.

Two approaches—wrapping the columns in a fiber-reinforced polymer or coating them with a compound named polyurea—have emerged as cost-effective candidates for further strengthening bridge columns. Still, it’s unclear whether they would hold up against the especially destructive collision-blast events.

Nebraska’s Daniel Linzell, Jennifer Rasmussen, Chen Fang and Tewodros Yosef recently developed models to determine how the approaches would fare under that extreme circumstance. After validating their models against prior experimental results, the team ran simulations in which a 17,637-pound truck collided with columns of various diameters—2.5, 3 or 3.5 feet—that were either bare, polymer-wrapped or polyurea-coated. Simulated explosions followed the collisions.

Their results indicated that the fiber-reinforced polymer would lend greater strength and stiffness than the polyurea, keeping even the 2.5-foot-wide column standing and operational when struck by an exploding truck traveling up to 75 mph. And the team called it the preferable option for speed limits above 60 mph. But according to the simulations, even a half-inch of the polyurea coating—which costs nearly seven times less than the fiber-reinforced polymer—would manage to keep the two wider columns intact.

The team suggested conducting full-scale, real-world tests to confirm its predictions. Modeling and testing different column shapes and vehicle types—both of which could influence the outcomes—would also be warranted, the researchers said.