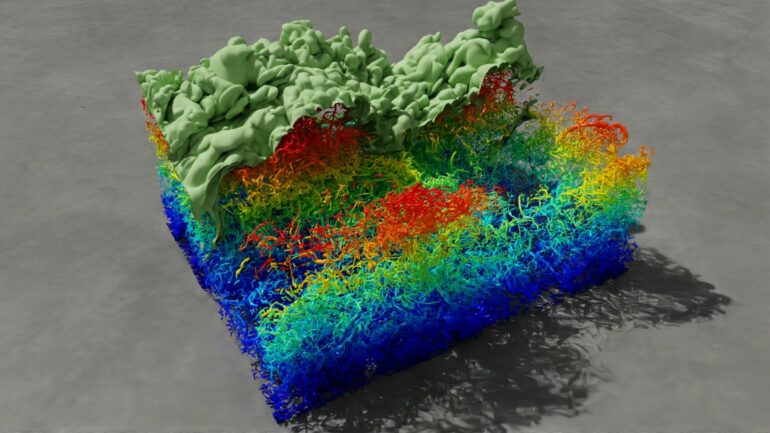 In one of the most intensive uses yet of the University of Florida’s HiPerGator supercomputer, UF engineers have faithfully reproduced the turbulence and complexity of hot air rising along a wall—a previously impossible simulation with applications in home fire safety and heating and cooling.

Such a fine-grained and detailed simulation of so-called thermal wall plumes has not been possible in the past because of the complexity of the air movements. But thanks to dedicated use of 90% of the HiPerGator’s AI cluster over several days, the research team led by UF engineering professor Sivaramakrishnan Balachandar was able to track turbulent eddies of air twisting and swirling on the sub-millimeter level.

“We used nearly the entire HiPerGator AI cluster to solve a problem which has hitherto not been solved in our community at this level of detail,” Balachandar said. “Turbulent flow is one of the grand challenges in science and engineering. Turbulence affects us everywhere, from airplane performance, to hurricane tracks and volcanic plumes.”

Thermal wall plumes occur when hot, buoyant air rises along a vertical surface. This process takes place during house fires and can spread fires quickly if not contained. But less destructive thermal wall plumes happen every day as heated or cooled air rises or sinks along the walls in interior spaces. Very similar processes explain mudslides and sediment-laden currents—plumes turned on their side.

Many scientists have studied thermal plumes experimentally, but this requires building expensive test sites and is limited by the number of sensors that can be placed on a wall. Those sensors also affect the very measurements that are being taken, muddying the data.

Computer models of thermal wall plumes solve many of the issues of real-world experiments, but the kinds of simulations that can run on an everyday computer are fuzzy and low-resolution. The millimeter-by-millimeter scale accomplished by Balachandar’s team requires the resources of a powerful supercomputer.

The researchers designed their simulation to replicate air movements in a real home. Virtually, they introduced warm air at the bottom of a wall along the baseboard and watched it evolve over time as it rose. The simulated house had vertical walls and roof lines of different slopes along which the thermal plumes developed, just like what would occur in a real home.

Together with real-world experiments and theories, these kinds of simulations form a major pillar of scientific discoveries, Balachandar says.

“Using computers, we solve Mother Nature, and what the computer simulation gives us is unprecedented access into all the details of what happens inside. With our simulation, we can go into the wall plume and see every nook and cranny,” Balachandar said.

Overall, the researchers tracked nearly 100 billion components, such as velocity, pressure and temperature, over a quarter-million instants in time. The work required 125 of the 140 nodes of the HiPerGator AI cluster. Each node hosts eight GPUs and 128 CPUs, which each perform different kinds of calculations. Balachandar’s team optimized their code to run on the NVIDIA GPUs that power the AI cluster nodes, further improving the performance of their simulation.

These kinds of detailed simulations also cascade down toward practical applications. For example, engineers use much simpler models—with possibly faulty assumptions baked in—to help them design and understand home heating systems or fire codes. Improving those models can make these designs better.

“Now we can test existing models and find out where they come up short. We plan to use artificial intelligence to analyze our terabytes of data and help us develop better models for people to use,” Balachandar said.