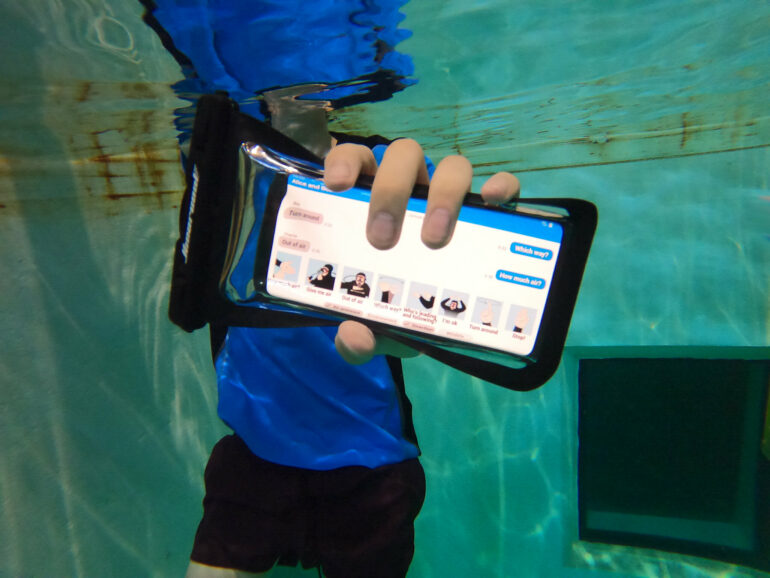 For millions of people who participate in activities such as snorkeling and scuba diving each year, hand signals are the only option for communicating safety and directional information underwater. While recreational divers may employ around 20 signals, professional divers’ vocabulary can exceed 200 signals on topics ranging from oxygen level, to the proximity of aquatic species, to the performance of cooperative tasks.

The visual nature of these hand signals limits their effectiveness at distance and in low visibility. Two-way text messaging is a potential alternative, but one that requires expensive custom hardware that is not widely available.

The researchers presented their paper describing AquaApp Aug. 25 at SIGCOMM 2022.

“Smartphones rely on radio signals like WiFi and Bluetooth for wireless communication. Those don’t propagate well underwater, but acoustic signals do,” said co-lead author Tuochao Chen, a UW doctoral student in the Paul G. Allen School of Computer Science & Engineering. “With AquaApp, we demonstrate underwater messaging using the speaker and microphone widely available on smartphones and watches. Other than downloading an app to their phone, the only thing people will need is a waterproof phone case rated for the depth of their dive.”

The AquaApp interface enables users to select from a list of 240 pre-set messages that correspond to hand signals employed by professional divers, with the 20 most common signals prominently displayed for easy access. Users can also filter messages according to eight categories, including directional indicators, environmental factors and equipment status.

In building the app, the team had to overcome a variety of technical challenges that they haven’t previously encountered on dry land.

“The underwater scenario surfaces new problems compared to applications over the air,” said co-lead author Justin Chan, a doctoral student in the Allen School. “For example, fluctuations in signal strength are aggravated due to reflections from the surface, floor and coastline. Motion caused by nearby humans, waves and objects can interfere with data transmission. Further, microphones and speakers have different characteristics across smartphone models. We had to adapt in real time to these and other factors to ensure AquaApp would work under real-world conditions.”

Other challenges included addressing the tendency for devices to rapidly shift position and proximity in the current, and the various noise profiles the app might encounter due to the presence of vessels, animals and even low-flying aircraft.

The team created an algorithm that allows AquaApp to optimize, in real time, the bitrate and acoustic frequencies of each transmission based on certain parameters, including distance, noise and variations in frequency response across devices.

Here’s how it works: When one user wants to send a message to another device, their app first sends a quick note, called a preamble, to the other device. AquaApp on the second device runs the algorithm to determine the best conditions to receive the preamble. Then it tells the first device to use those same conditions to send the actual message.

The researchers developed a networking protocol to share access to the underwater network, akin to how WiFi networks referee internet traffic, to support messaging between multiple devices. AquaApp can accommodate up to 60 unique users on its local network at one time.

The team tested the real-world utility of the AquaApp system in six locations offering a variety of water conditions and activity levels, including under a bridge in calm water, at a popular waterfront park with strong currents, next to the fishing dock of a busy lake and in a bay with strong waves. The researchers evaluated the app’s performance at distances of up to 113 meters and depths of up to 12 meters.

“Based on our experiments, up to 30 meters is the ideal range for sending and receiving messages underwater, and 100 meters for transmitting SoS beacons,” Chen said. “These capabilities should be sufficient for most recreational and professional scenarios.”

The researchers also measured AquaApp’s impact on battery life by continuously running the system on two Samsung Galaxy S9 smartphones at maximum volume and with screens activated. The app reduced the devices’ battery power by just 32% over the course of four hours, which is within the maximum recommended dive time for recreational scuba diving.

“AquaApp brings underwater communication to the masses,” said senior author Shyam Gollakota, a UW professor in the Allen School. “The state of underwater networking today is similar to ARPANET, the precursor of the internet, in the 1970s, where only a select few had access to the internet. AquaApp has the potential to change that status quo by democratizing underwater technology and making it as easy as downloading software on your smartphone.”

The team’s data and open-source Android code are available on the AquaApp website.