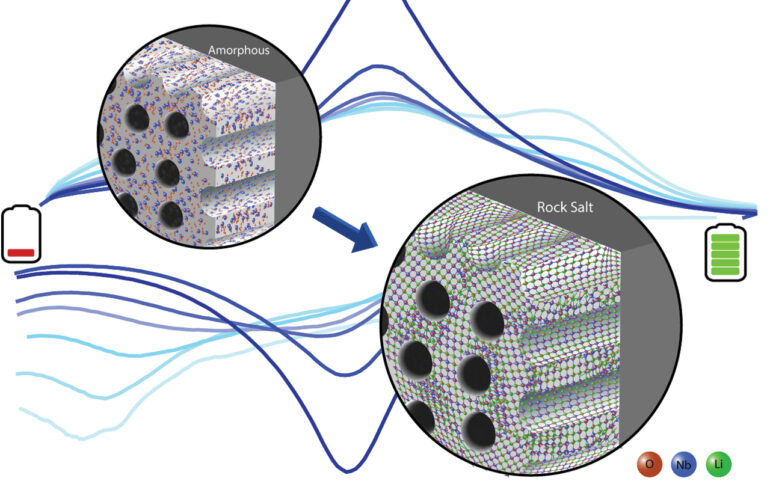 Researchers at Boise State University have developed a new approach to making novel lithium-ion battery materials. Starting from an amorphous (i.e., a material lacking long-range order) niobium oxide, the team discovered that the very act of cycling the material with lithium induces a transformation to a novel crystalline Nb2O5 anode with exceptional Li storage and fast cycling. This process can potentially be used to make other lithium-ion battery materials that cannot be easily made via traditional means.

“Lithium-ion batteries are the leading technology for the rechargeable battery market, but there’s also an increase in the demand for the battery to have high energy, and faster charging times,” said Pete Barnes, a Ph.D. alumnus of Xiong’s Electrochemical Energy Materials Lab in the Micron School of Materials Science and Engineering and the lead author of the work. “If you want to charge your EV for 15 minutes and then get on the road for the next 200 or 300 miles, you need new battery electrodes that can be charged at a very fast rate without much loss in performance.”

Among one of the biggest bottlenecks to charging in today’s lithium-ion batteries is the anode. The most common anode is made of graphite, which is very energy dense, but cannot be charged too quickly due to the risk of fire and explosions from a process known as lithium metal plating. Intercalation metal oxides, like the rock salt Nb2O5 material discovered by the team, are promising anode alternatives due to the reduced risk of lithium plating at low voltages.

To create the new anode material, Xiong’s group developed an innovative new technique called electrochemically-induced amorphous-to-crystalline transformation. The new electrode can achieve high lithium storage of 269 mAh/g at a charging rate of 20 mA/g, and more importantly, continues to retain a high capacity of 191 mAh/g at a high charging rate of 1 A/g.

“The most exciting aspect of this work is the discovery of a completely new approach to create novel lithium-ion battery electrodes,” said Xiong. “The trick is to start from a higher energy phase, such as an amorphous material. Just cycling the material with lithium allows us to create new crystalline arrangements that exhibit improved properties beyond those made via traditional means such as solid-state reactions.”

The exceptional rate performance of the anode is due to its disordered rock salt or DRX structure, which is like ordinary kitchen table salt but with the Li and Nb atoms arranged in a random fashion. While DRX cathode materials are well-known, DRX anodes are relatively rare. Using computational techniques, Yunxing Zuo, a Ph.D. alumnus of Ong’s Materials Virtual Lab at UC San Diego, showed that the process of inserting Li into amorphous Nb2O5 allows materials scientists to access metastable materials. The team also developed a metric to identify other metal oxides that can potentially be synthesized in a similar fashion. The computations also show that the DRX structure contains paths for fast lithium diffusion, resulting in high rate performance.

“We believe this work to be merely the beginning of a completely new way of thinking about materials synthesis,” said Ong. “Atoms like to arrange themselves in certain ways. When we make materials the traditional way, we usually get the same arrangements again and again. This new approach opens up a promising avenue for creating other unconventional metal oxides.”

Computer model can determine whether you’ll die from COVID-19