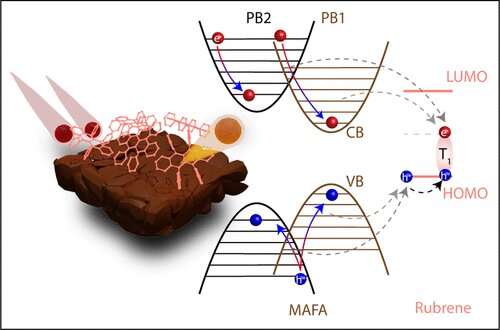 In a new study, a Florida State University researcher illuminates the fundamental properties of a process used to make better solar cells, giving scientists knowledge about how to further fine-tune that work and build more efficient devices.

“This is building upon our goal to build better solar cells from new materials,” said FSU Assistant Professor of Chemistry Lea Nienhaus. “This paper looks at the underlying mechanisms of charge extraction at the perovskite/organic interface to see how and when this process occurs, so that we can improve the efficiency of the overall device.”

The work is laid out in the journal ACS Energy Letters.

Nienhaus has been working on building more efficient solar cells in a variety of ways.

One route is by expanding the region of the solar spectrum that a solar cell can utilize by converting unusable low energy light into useable higher energy light. This can occur through a process called photon upconversion or triplet-triplet annihilation.

The same charge carriers that are extracted as a current in a solar cell can also populate the triplet state of an organic molecule. The combination of two triplet states results in a higher energy, emissive singlet state. The resulting high energy emitted photon can then be absorbed by a solar cell.

However, to date, the delicate, lightning-fast charge extraction processes resulting in the triplet state are unknown.

Nienhaus and colleagues created a thin film of lead-halide perovskites and a hydrocarbon called rubrene, which emits the upconverted light. They then utilized ultrafast transient absorption spectroscopy to understand the exact timing of the underlying charge transfer processes which generate the triplet states.

They found that the process involved thermally excited or “hot” charge carriers in the perovskite that resulted in the generation of triplet states in rubrene on a sub-nanosecond timescale.

“Hopefully this information will give us a starting point to design new and improved perovskite materials for triplet sensitization,” Nienhaus said. “Energetically, we would like to upconvert near-infrared light to the green or blue spectral region, to really maximize the energy gains obtained in upconversion. If we know the exact charge transfer mechanism and energy levels involved, we can tune both sides of the equation and maximize performance.”

Xiaomi phones might finally get good software – or less bad, at least

In Apps and WebSmartphones
on 3 June 20211 min read