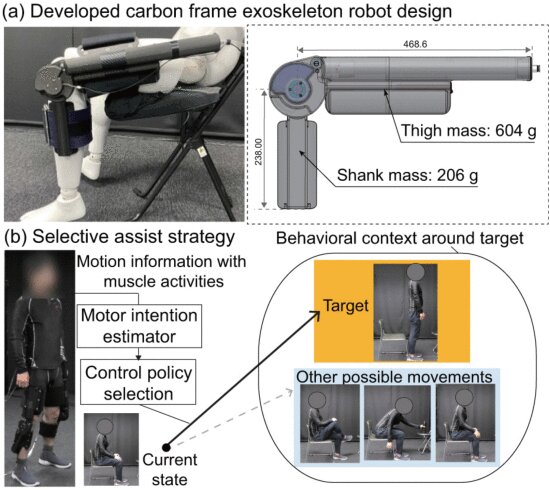 Researchers from the RIKEN Guardian Robot Project and collaborators have used a combination of lightweight material engineering and artificial intelligence to create an exoskeleton robot that could help people with mobility impairments. An important element of the new device is technology that allows the skeleton to effectively guess the intentions of the user.

Robotic exoskeletons promise to play an important role in supporting an aging population. Essentially, they are suits that people can wear, allowing them to exert strength when their old bodies are not capable of exerting strength themselves. However, developing exoskeletons has been hampered by the fact that they are generally heavy, and if not properly controlled can act as hindrances rather than assistance. Thus, it is important to develop exoskeletons that are both lightweight and can assist the efforts of the user without hindering their efforts.

The current research involved two main elements. First, the researchers developed a lightweight, carbon fiber-based exoskeleton for the lower body that was attached to the thighs and lower legs of users. The exoskeleton was built with highly back-drivable actuators, so that it did not impede the movements of users even when the actuators were not activated. And importantly, the research team turned to artificial intelligence to see if they could use it to predict how the user wanted to move. They used a method known as PU-learning, or positive and unlabeled, to have the exoskeleton learn to correctly read the intentions of the user, based on measurements of the muscle activities of the user. The PU-classification method allows the use of ambiguous data, by combining positively labeled data, which the machine knows is correct, with other unlabeled data that might either be positive or negative, allowing the artificial intelligence to learn from data that is not all labeled.

For the experiment, participants performed various movements that can begin in the same way—standing up, crossing their legs, leaning forward, and repositioning themselves in a chair. The exoskeleton used machine learning to guess when they were actually trying to stand up and then provided assistance for the movement.

The experiment was successful. According to Jun-ichiro Furukawa of the Guardian Robot Project, the first author of the paper, the results were better than conventional systems that use fully labeled data in situations where user’s behavior other than the target sit-to-stand motion can occur, indicating that the method could be expanded to other movements as well.

According to Jun Morimoto, who led the research team, “The key element of our research is that when controlling a robot to assist human movement, it is important to develop it based on the assumption that humans will behave in ways that are not in the learning data.”