An omnidirectional octopus-like robot arm that can stretch, bend and twist without a motor 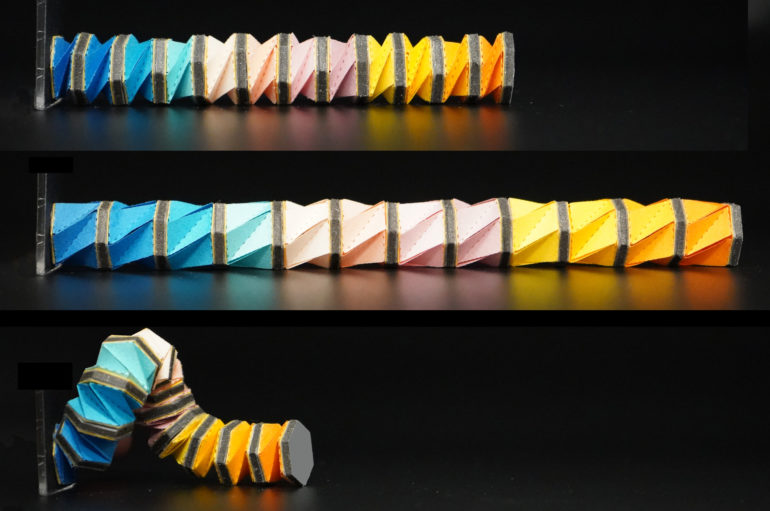 A combined team of researchers from The Ohio State University and the Georgia Institute of Technology has developed a robot arm that moves like an octopus arm without the need for a motor. In their paper published in Proceedings of the National Academy of Sciences, the group describes their robot arm, which moves in response to changes in a magnetic field around it.

Noting that the need for motors and control units makes most robot arms big and heavy, the researchers set themselves the goal of building one that would not need either. Instead, theirs would be controlled by altering its surrounding magnetic field.

To create the robot arm, the researchers looked to the octopus and the ancient art of origami. To build an arm that could mimic an octopus arm, the researchers used a segmented approach. The arm was built using individual segments made of hexagonal-shaped, soft dual silicon plates with embedded magnetic particles. The plates were connected using tilted plastic panels that conformed to the kresling origami pattern.

Next, the segments were connected together at the plates. The arm was then placed into a controllable magnetic field. Because each segment had its own magnetic particles, each could be controlled individually by the researchers by changing the parameters of the magnetic field. This gave the robot arm 360 degrees of movement. It also allowed the robot arm to change its length by compressing the segments in a twisting fashion, similar to a concertina, or by pulling them to make them longer. The researchers note that computerizing the magnetic field could lead to very fine control of the arm by a user using a simple game-like controller. Under such an environment, the arm, possibly with an attached hand or claw, could move in limitless ways. They also note that the design allows for customization, including the number of segments, plate size and the degree of bendability.

The researchers acknowledge that their robot arm lacks strength but suggest it does not need strength because they envision it, or a similar design, being using in applications that require more finesse than strength. They suggest it might prove useful in medical applications, for example, where a high level of accuracy is required.

Deep learning networks prefer the human voice—just like us

Citation:
An omnidirectional octopus-like robot arm that can stretch, bend and twist without a motor (2021, August 31)
retrieved 31 August 2021
from https://techxplore.com/news/2021-08-omnidirectional-octopus-like-robot-arm-motor.html