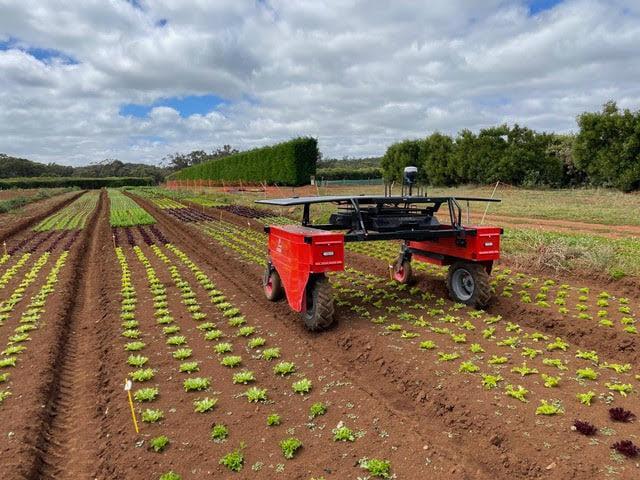 A “drone on wheels” robot developed by Australian agtech firm Agerris is the newest addition to the Victorian-based SuniTAFE Smart Farm that will be used to not only support the farm’s operations, but also to train technical staff on-site.

The Digital Farmhand was developed to help farmers improve crop yield, pest and weed detection, as well as reduce the need for pesticides.

The contract with SuniTAFE is one of several that Agerris has secured over the last few years since it spun out as a commercial entity from the University of Sydney’s Australian Centre for Field Robotics in 2019. There are three other Digital Farmhand robots deployed in Victoria, and another in Queensland and New South Wales.

Speaking to ZDNet, Agerris CEO Salah Sukkarieh revealed the company plans to build another 10, citing that having such technology on-farm means improved efficiency and productivity for farmers.

“Weeds are one of those things that when you let the weeds grow the way they do, you deprive the plants of nutrients and it removes the yield that you want to get out of the plants,” he said.

“When it comes to the crop intelligence, you get early detection of pest disease and that helps them to detect it before it spreads further in the field.”

At the same time, it also gives farmers access to information they never previously had access to, Sukkarieh added.

Designed to run every day, the Digital Farmhand is configured to maps out the farm it works within in order to know how much it needs to travel within a paddock and its rows.

“It follows the rows of crops, it knows when it needs turn at the end, and when to come back down. It’s got sensors looking down, and collecting the data and information from the plants continuously. Doing that week-on-week, you can look at the changes,” Sukkarieh said.

The Digital Farmhand is not the only robot Agerris has developed. The company is also gearing up to launch a commercial prototype of the Swagbot, which is aimed at helping the cattle industry examine pasture quality and animal health management.

“Farming is a business … what’s generally happening is there’s a labour shortage, costs are increasing, and the consumer demand for higher quality is forcing everyone to think about what they should do on-farm. A lot of [farmers] are starting to turn their attention to robots and sensing. Some are moving quicker than others,” Sukkarieh said.

Sensors, robotics, AI, and blockchain are outlined as some of the future technologies that can improve the sector’s advancement.

It developed ePaddocks for the agriculture sector to better understand the boundaries of grain paddocks across the country.