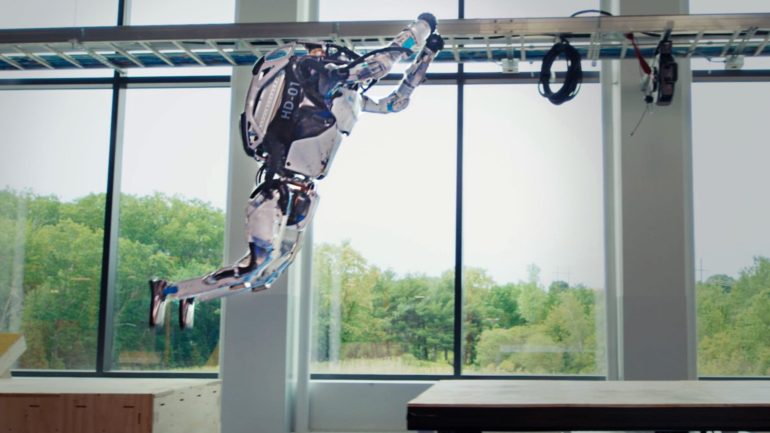 Boston Dynamics, the company known for its robotic dogs, now has a humanoid robot capable of doing gymnastics.

The robotics company previously has shown how its robot dogs can go down stairs and open doors. Some police departments have begun using the robot dogs, typically called Spot, to help patrol. And Atlas, which the company dubbed “the world’s most dynamic humanoid,” showed in an earlier video how the robot can jog and jump over a log.

In a new video, Atlas now can do parkour—a sport of moving through obstacles—jumping and running along uneven platforms. Then, two humanoid robots do synchronized movements including turning, spinning and two flips, mirroring each other moves.

Having the robots perform parkour sequences including running along a balance beam, jumping and doing flips helps in the development of a robot capable of multiple tasks, “a go-anywhere, do-anything robot of the future,” said Scott Kuindersma, leader of Boston Dynamics’ Atlas team, in a blog post accompanying the new videos.

“The work that we are doing now is really just foundation building,” he said. “We are building the core capabilities that we think any useful robot will need and in doing so we are really just defining the next set of challenges that we are going to be working on over the next two to five years.”

Some facts the company dished up on Atlas: the robot is five feet tall, weighs 190 pounds, has an on-board battery, RGB cameras and depth sensors, as well as three built-in computers.

Boston Dynamics also released a new behind the scenes video showing that the robots don’t always accomplish their skills in the first try. “It can be frustrating sometimes the robots crash a lot,” said Atlas controls lead Benjamin Stephens, Atlas Controls Lead. “It’s not the robot just magically deciding to do parkour. It’s kind of a choreographed routine much like a skateboard video or a parkour video where it’s an athlete who has practiced these moves dozens or hundreds of times even to get to that high level that exciting capability. So we are kind of doing the same thing here with Atlas, exploring how to push it to its limits.”

This scientists at Boston Dynamics had just begun having the two robots do parkour simultaneously two weeks ago and this was the first time they had filmed them together, said Ben Stephens, the Atlas controls lead. “Every behavior here has a small chance of failure. It’s almost 90 seconds of continuous jumping, jogging, turning, vaulting, and flipping, so those probabilities add up.”