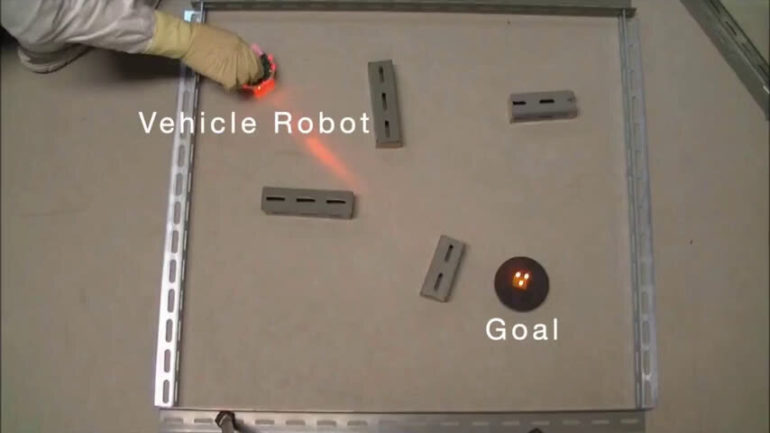 Can intelligence be taught to robots? Advances in physical reservoir computing, a technology that makes sense of brain signals, could contribute to creating artificial intelligence machines that think like us.

In Applied Physics Letters, researchers from the University of Tokyo outline how a robot could be taught to navigate through a maze by electrically stimulating a culture of brain nerve cells connected to the machine.

These nerve cells, or neurons, were grown from living cells and acted as the physical reservoir for the computer to construct coherent signals.

The signals are regarded as homeostatic signals, telling the robot the internal environment was being maintained within a certain range and acting as a baseline as it moved freely through the maze.

Whenever the robot veered in the wrong direction or faced the wrong way, the neurons in the cell culture were disturbed by an electric impulse. Throughout trials, the robot was continually fed the homeostatic signals interrupted by the disturbance signals until it had successfully solved the maze task.

These findings suggest goal-directed behavior can be generated without any additional learning by sending disturbance signals to an embodied system. The robot could not see the environment or obtain other sensory information, so it was entirely dependent on the electrical trial-and-error impulses.

“I, myself, was inspired by our experiments to hypothesize that intelligence in a living system emerges from a mechanism extracting a coherent output from a disorganized state, or a chaotic state,” said co-author Hirokazu Takahashi, an associate professor of mechano-informatics.

Using this principle, the researchers show intelligent task-solving abilities can be produced using physical reservoir computers to extract chaotic neuronal signals and deliver homeostatic or disturbance signals. In doing so, the computer creates a reservoir that understands how to solve the task.

“A brain of [an] elementary school kid is unable to solve mathematical problems in a college admission exam, possibly because the dynamics of the brain or their ‘physical reservoir computer’ is not rich enough,” said Takahashi. “Task-solving ability is determined by how rich a repertoire of spatiotemporal patterns the network can generate.”

The team believes using physical reservoir computing in this context will contribute to a better understanding of the brain’s mechanisms and may lead to the novel development of a neuromorphic computer.

Scientists develop the next generation of reservoir computing