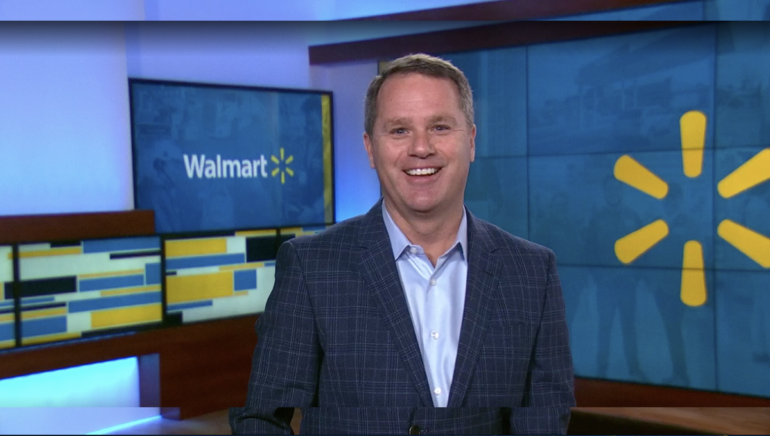 Walmart CEO Doug McMillon was the big keynoter at the Consumer Electronics Show 2021, in a half an hour segment that covered a range of broad topics such as equality and leadership. He was hosted by Tiffany Moore, senior Vice President, political and industry affairs for the Consumer Technology Association.

The exchange brought now announcements of the CES kind, but was interesting more for the ways in which Moore got McMillan to delve into broad ongoing change, such as the push for greater workplace equality and diversity, the fight against climate change, and employee skills training, and the role of leadership in times of challenge.

If there was an over-arching technology angle, it was that techniques of machine learning and Big Data are necessary to handle a pace of change for the company that to McMillan looks like a permanent change in the way Walmart does business.

“The run rate of the company going forward will be faster forever as a result of what’s happened,” said McMillan.

Walmart, said McMillan, has been “modernizing our tech stack,” which has “resulted in a lot of speed and innovation.” The company is focused on things such as “what the future of AI will mean, or how robotics will change our business, and how 5G will change how people want to live and shop,” he said.

While there is one single technology “changing the world,” said McMillan. Rather, “we have to get better at forecasting demand, about how we use AI and how we use data.” Goals include saving people time, which is about personalization, he said. “We have to personalize to do that,” but at the same time, with respect to consumers’ data, Walmart must be “always earning their trust, never surprising them with how their data is used.”

The Walmart Plus initiative

Moore asked McMillan for an update on the company’s Walmart Plus initiative. That effort includes things such as the “scan and go” option at stores, so customers can “check out without checking out.”

“There will be other things that make Walmart plus more robust,” he said. “It will be unique, we won’t be copying anyone else.” Among priorities, he said, is “to build capacity for delivery,” which is “One important component of our strategy for a long long time.”

Dealing with the pandemic

Regarding the pandemic, McMillan said Walmart started providing vaccinations in New Mexico and is now working in “quite a few states, as they make decisions as to which group is in 1A 1B, 2,” he said. “Making sure we can handle the vaccine, and do so appropriately and safely, that’s a learning process, we are having to be flexible,” added McMillan.

Moore asked McMillan about how the company has pivoted to preventive care for store associates. Walmart Health, which is a clinic initiative that’s been ongoing for two years for the company’s staff, has the “goal to bring value, quality and price for services to preventative care in a way that is easily accessible,” he said. The goal is to be “omni-channel,” he said, to provide in-person care but also to use data. “There are components” of health, he said, “that will always be in person, but there are others, such as the way we use data, the way digital can play a role, that we can stitch together in a way we think will be unique, and leverages the assets we have and the culture we have to serve.”

McMillan applauded store staff for working in stores during the pandemic. “It’s so challenging to execute this, they’ve done such a beautiful job.”

Moore asked how the company was able to “pivot the workforce” to address the pandemic. McMillan responded by citing five priorities: “First, keep associates safe […] everyday getting up, visiting stores, that’s where all the operational changes, the other things we did came from. It was fast. It was amazing to me how quickly we were able to secure tens of millions of masks for associates in the early days.”

There were times, he said, when “our teams were identifying things that needed to be done, and my internal voice was saying, there is no way to do it that fast, but I knew enough not to say that, and they got it done.”

Number two was to keep the supply chain moving, which involved coping with the fact that “demand really changed” for things such as home goods. Because Walmart turns inventory fast, it wasn’t sitting on a lot of supply. Merchants “did a fantastic job” coping with the new patterns, he said. The third priority was was to help others, he said, including giving suppliers different terms, using Walmart’s cash flow advantage. The fourth item was to “manage the business, to not run into cash flow issues.”

And, fifth, to create strategy to move forward. “There were behavioral changes from shoppers that drove our e-commerce business, and pick-up business,” he observed.

“Many of those things won’t go back,” McMillan opined. “Pick-up and delivery are going to grow and be bigger.”

Dealing with biases, learning about American history and inequality

Moore asked McMillan about the death of George Floyd. Noting Walmart’s past efforts on diversity, she asked, “What is different about this moment?

McMillan said the company had “been on our own diversity journey before.”

“You tell yourself, we are doing what we should, we see progress, and then something happens: the murder of George Floyd captures everyone’s attention — and he is not the only one, many other people have suffered — where you said, We were all watching this, it’s an opportunity to make more progress faster.” McMillan said the company has been “trying to seize that moment inside the company,” as an “opportunity to be more bold and aggressive.” That includes having conversations with staff, because “change starts within each of us, our biases heed to be dealt with,” including “difficult conversations.”

It also included, “learning more about American history, some things that I was not taught in school,” added McMillan, “about the financial system, the criminal justice system, in particular, areas that result all too often in inequity.”

“We’ve been looking in the mirror, learning,” but also “change processes,” said McMillan, for things such as promotions and pay. Walmart used to have an annual report on diversity progress but has now created a mid-year report. “We share a ton of data on whether we are progress or not making progress.

Outside Walmart, he said, the company is looking to ways to use its resources, such as specifically working with Black-owned enterprises. “Our deposits at night, if we put those in a Black-owned bank, if we engage with Black-owned advertising firms, to actually think about ownership and equity.”

Asked about leadership, McMillan said it had been important to go beyond diversity training in the company. He recalled his trips to Montgomery, Alabama, to learn more about the civil rights movement. “To educate me, to tell me about what happened.” McMillan encouraged companies to “be vulnerable, take a risk,” in having conversations with staff. “If you say the wrong thing, you’ve built up enough good will” that the conversation can proceed. he said. “If you don’t have these conversations, you don’t make any progress.”

Regarding climate change, where Walmart has had a goal for some time to “take a giga-ton over time out of our supply chain,” the goal going forward is to “become a regenerative company, to not only offset the negatives but do other things to protect the natural habitat, whether land or ocean, to reverse what is happening on our planet, and heal.”

Moore asked McMillan about his statement that he was “29 years educated at Walmart,” and what he sees for skills training. In a company of 2.3 million people, McMillan said, where an individual Walmart super center may be responsible for more than a hundred million in annual sales, “is a big job.”

That requires hiring a lot, however, “we need to not only hire people to do those jobs, but to grow our own,” he added. Two-thirds of Walmart’s U.S. store management started their careers in hourly ranks, he said. The company has created 200 academies, classrooms in the back of our stores. “They are first-class in terms of the technology we use and the curriculum we use.” The goal, he said, is skills building “not just about retail but how to be a coach and be empathetic with customers and associates, to develop people skills to become a leader.”

In closing, Moore asked McMillan “what have you learned” about leadership.

McMillan offered the view that delegating, and trust, are important. “One thing is just how capable our people are; knowing that you can count on them and trust them.”

“As a leader, you can’t make all these decisions; there’s no way I could try to make all the decisions related to Walmart,” he said. “During this past year, there were quite a few times when we were facing something I didn’t know the answer to, we talked as a team.”

“People know about the issue, and often it’s just about empowering them to do it, saying,  Tiffany, this one is on you, I’ll support you.”