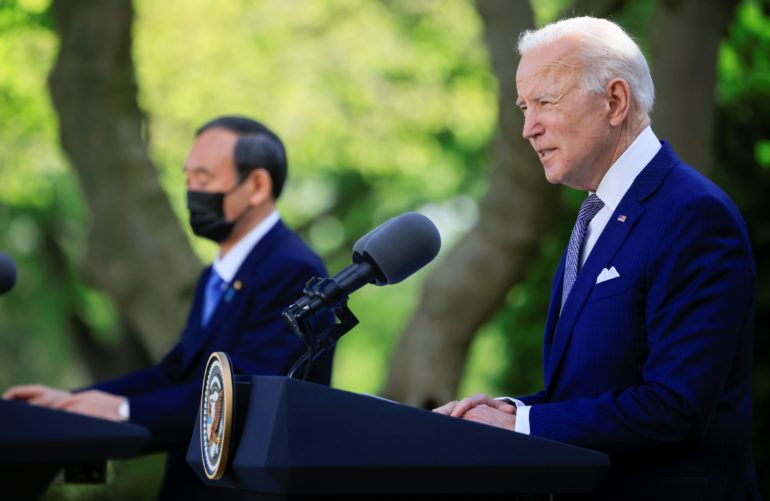 GUANGZHOU, China — In his first 100 days as president, Joe Biden has made one thing clear — he wants to make sure the U.S. outcompetes China on a number of fronts, with technology being front and center.

His policies continue the Trump-era hardline on export controls to Chinese technology companies but adds some new elements — collaboration with allies in areas seen as critical, such as semiconductors and a focus on beefing up domestic capabilities.

“The priority is on domestic innovation and forging technology alliances to coordinate confrontation against China in the tech domain,” Paul Triolo, head of the geo-technology practice at Eurasia Group, said.

What has Biden done so far?

While Biden has kept these rules in place, he has also announced policies aimed at boosting American innovation.

“Where the Trump administration tended to focus on defensive measures (e.g., restrictions on Chinese military companies), early messaging about Biden’s approach suggests that it pairs those with more offensive, or proactive ones — investments, for example, in alternatives to China,” said Emily de La Bruyere, co-founder of consultancy Horizon Advisory.

In his American Jobs Plan, Biden calls on Congress to make a $180 billion investment in advancing “U.S. leadership in critical technologies and upgrade America’s research infrastructure.” There is also a call to invest $50 billion in manufacturing and research, via the bipartisan CHIPS Act.

Raising new barriers around U.S. technologies and essentially weaponizing key supply chains as part of an effort to contain China’s rise are (also) part of the Biden strategy.

A technology directorate would be set up under the newly-named NSTF and would be given $100 billion over five years to “reinvigorate American leadership in the discovery and application of key technologies that will define global competitiveness.”

The directorate would fund research in 10 key areas including artificial intelligence, semiconductors, robotics, materials sciences, advanced communications technologies, among others.

The focus on domestic investment but also maintaining export controls is “primarily driven by the perceived need to protect the U.S. company technology leadership in key areas such as semiconductor manufacturing,” Triolo said.

But “raising new barriers around U.S. technologies and essentially weaponizing key supply chains as part of an effort to contain China’s rise are (also) part of the Biden strategy,” he added.

Another difference between Biden’s approach to China and technology and Trump’s is the focus on “multilateralism,” according to Bruyere.

Earlier this month, Biden and Japanese Prime Minister Suga Yoshihide, said the U.S. and Japan would work together on research and development in areas such as artificial intelligence and biotechnology.

The competition between the U.S. and China is an ideological one. China is trying to shape a new global order; it’s up to Washington to lead the development of a better alternative.

The two nations also said they will partner on “supply chains, including on semi-conductors, promoting and protecting the critical technologies that are essential to our security and prosperity.”

Biden will also meet South Korean President Moon Jae-in in Washington next month. Semiconductors and tech issues are expected to be part of their conversation.

Both Japan and South Korea are key parts of the semiconductor supply chain and are growing players in other critical areas of technology, including robots and next-generation 5G mobile networks.

“The competition between the U.S. and China is an ideological one. China is trying to shape a new global order; it’s up to Washington to lead the development of a better alternative,” Bruyere said. “For that alternative actually to be better — and convincingly so — it has to be multilateral. It has to incorporate the interests and voices of global stakeholders.”

What is China doing?

Biden’s focus on technology in his first 100 days of presidency is in part a response to China’s growing technological ambition.

In its five-year development plan, Beijing said it would make “science and technology self-reliance and self-improvement a strategic pillar for national development.”

The plan looks to boost research into “frontier technology,” seven areas from quantum computing and semiconductors, that China sees as being key.

For the past few years, China has been trying to catch up with the U.S. and other nations in the area of semiconductors, though it remains far behind.

Horizon Advisory’s Bruyere said questions still remain over Biden’s approach to China’s moves so far including whether the administration will focus on broad technology areas or “lower-value add areas like machine tools and fundamental, primary raw materials like lithium” which China currently dominates.

Another question is whether the U.S. can compete with China “for scaled, global applications of the technological capabilities it’s building at home.” Technology standards is one area.

“The biggest question right now is whether the U.S. is able to adopt the comprehensive strategic framing necessary effectively to compete with China’s approach,” Bruyere said.