Exponential, book review: Technology acceleration and its impact on society 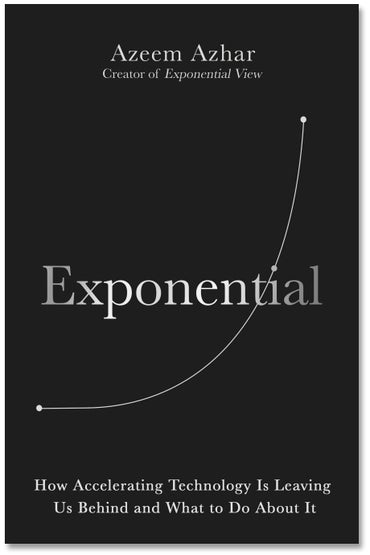 For the last couple of years the coronavirus has been teaching a master class on exponential growth: from January 2020, when 100 cases in China led the WHO to call a public health emergency, to today, when there have been over 239 million cases worldwide.

Before that, as people have begun to forget, exponential growth was perhaps best known as the secret behind the rise of computers. Moore’s Law — the observation made by Intel co-founder Gordon Moore that the number of transistors on an integrated chip doubles roughly every two years — is the reason the smartphone in your pocket is more than a thousand times more powerful than the biggest computers 50 years ago, which only governments and large organisations could afford.

The exponential growth of computer power led the inventor Ray Kurzweil to propose the Law of Accelerating Returns and predict that by 2045 machine intelligence will pass that of humans — a.k.a. the Singularity.

In Exponential: How Accelerating Technology is Leaving Us Behind and What to Do About It, Azeem Azhar begins with the perception that Kurzweil’s take was too narrow and that exponential growth is taking place in no less than four converging sectors: computing, energy, biology, and manufacturing.

In energy, the cost of renewables is plummeting. In biology, the cost of genome sequencing is doing the same. The first human genome took 13 years and $3 billion; today anyone can get theirs done for $200 in a few days and fast sequencing was part of why we got covid vaccines so soon. In manufacturing, 3D printing is rapidly improving, and offers entirely new possibilities for creating everything from buildings to organs.

Taken together, the world we’re hurtling into will look quite different. Azhar credits Kurzweil for recognising that the biggest contributor to our perception that it’s ‘accelerating’ is the parallel development and interaction of different technologies. The result, Azhar writes, is an “exponential gap” that’s opening up between our understanding of our world, which updates slowly, and the arriving technologies, which change faster than we can cope with.

In this book, and in the Exponential View podcast and newsletter that preceded it, Azhar, who has been a journalist, a multiple company founder, and a venture capitalist, says he wants to straddle CP Snow’s Two Cultures — art and science — in order to understand the impact of all these new technologies on society.

To fulfil this ambition, he first explores the four accelerating sectors, and then discusses their effect on the interaction between politics and the economy. Azhar then considers the impact on the relationship between the citizen and society, and concludes by making suggestions for broad principles that can guide us through the phase transition and setting four prescriptions for the road ahead: transparency, openness, interoperability, and digital rights.

The principles Azhar proposes are broad: we need to build resilience and flexibility; we need to rethink our conceptions of the nature of monopoly, and the relationship between workers and employers; and we need to understand the changing power relationships between cities, regions, and nations. Above all, we need to remember that technology is a force we can direct.

Preparing for the ‘golden age’ of artificial intelligence and machine learning

In CompaniesGamingSmartphones
on 5 September 20214 min read

‘Are we willing to pull the plug?’ Tech projects are under scrutiny as digital ethics concerns increase

Quantum computing is at an early stage. But investors are already getting excited