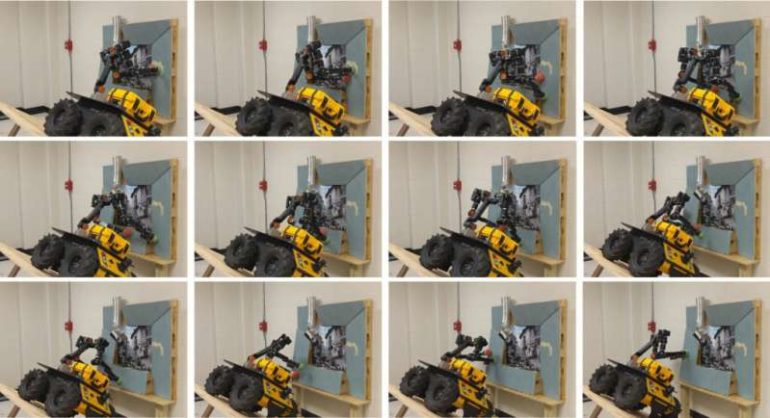 A new algorithm speeds up path planning for robots that use arm-like appendages to maintain balance on treacherous terrain such as disaster areas or construction sites, researchers at the University of Michigan have shown. The improved path planning algorithm found successful paths three times as often as standard algorithms, while needing much less processing time.

“In a collapsed building or on very rough terrain, a robot won’t always be able to balance itself and move forward with just its feet,” said Dmitry Berenson, an associate professor of electrical and computer engineering and core faculty in the Robotics Institute.

“You need new algorithms to figure out where to put both feet and hands. You need to coordinate all these limbs together to maintain stability, and what that boils down to is a very difficult problem.”

The research enables robots to determine how difficult the terrain is before calculating a successful path forward, which might include bracing on the wall with one or two hands while taking the next step forward.

“First, we used machine learning to train the robot on the different ways it can place its hands and feet to maintain balance and make progress,” said Yu-Chi Lin, recent robotics Ph.D. graduate and software engineer at Nuro, Inc. “Then, when placed in a new, complex environment, the robot can use what it learned to determine how traversable a path is, allowing it to find a path to the goal much faster.”

However, even when using this traversability estimate, it is still time-consuming to plan a long path using traditional planning algorithms.

“If we tried to find all the hand and foot locations over a long path, it would take a very long time,” said Berenson.

“That sounds simple, but it’s really hard to know how to split up that problem correctly, and which planning method to use for each segment,” said Lin.

To do this, they need a geometric model of the entire environment. This could be achieved in practice with a flying drone that scouts ahead of the robot.

In a virtual experiment with a humanoid robot in a corridor of rubble, the team’s method outperformed previous methods in both success and total time to plan—important when quick action is needed in disaster scenarios. Specifically, over 50 trials, their method reached the goal 84% of the time compared to 26% for the basic path planner, and took just over two minutes to plan compared to over three minutes for the basic path planner.

The team also showcased their method’s ability to work on a real world, mobile manipulator—a wheeled robot with a torso and two arms. With the base of the robot placed on a steep ramp, it had to use its “hands” to brace itself on an uneven surface as it moved. The robot utilized the team’s method to plan a path in just over a tenth of a second, compared to over 3.5 seconds with the basic path planner.

In future work, the team hopes to incorporate dynamically-stable motion, similar to the natural movement of humans and animals, which would free the robot from having to be constantly in balance, and could improve its speed of movement.

In AIApps and WebComputer science
on 24 September 20203 min read

A framework for robot path finding in unstructured environments