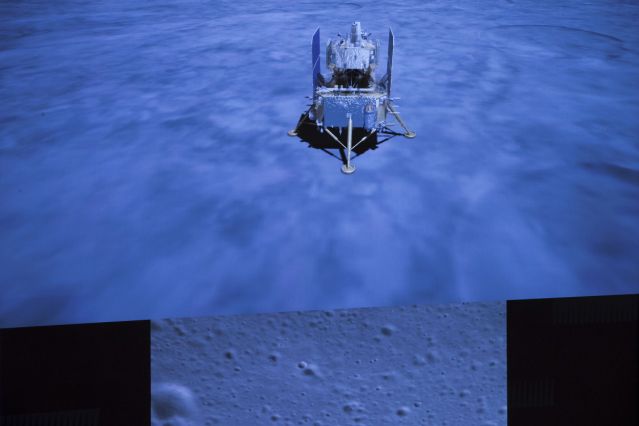 China said Thursday its latest lunar probe has finished taking samples of the moon’s surface and sealed them within the spacecraft for return to Earth, the first time such a mission has been attempted by any country in more than 40 years.

The Chang’e 5, the third Chinese probe to land on the moon, is the latest in a series of increasingly ambitious missions for Beijing’s space program, which also has a probe en route to Mars carrying a robot rover.

The Chang’e 5 touched down Tuesday on the Sea of Storms on the moon’s near side, on a mission to return lunar rocks to Earth for the first time since 1976.

The probe “has completed sampling on the moon, and the samples have been sealed within the spacecraft,” the China National Space Administration said in a statement.

Plans call for the upper stage of the probe known as the ascender to be launched back into lunar orbit to transfer the samples to a capsule for return to Earth. The timing off its return was not immediately clear and the lander can last up to one moon day, or 14 Earth days, before plummeting temperatures would make it inoperable.

Chang’e is equipped to both scoop samples from the surface and drill 2 meters (more than 6 feet) to retrieve materials that could provide clues into the history of the moon, Earth other planets and space features.

While retrieving samples is its main task, the lander is also equipped to extensively photograph the area surrounding its landing site, map conditions below the surface with ground penetrating radar and analyze the lunar soil for minerals and water content.

Chang’e 5’s return module is supposed to touch down around the middle of December on the grasslands of Inner Mongolia, where China’s crewed Shenzhou spacecraft have made their returns since China first put a man in space in 2003, becoming only the third country do so after Russia and the United States.

Chang’e 5 has revived talk of China one day sending a crewed mission to the moon and possibly building a scientific base there, although no timeline has been proposed for such projects.

China also launched Its first temporary orbiting laboratory in 2011 and a second in 2016. Plans call for a permanent space station after 2022, possibly to be serviced by a reusable space plane.

While China is boosting cooperation with the European Space Agency and others, interactions with NASA are severely limited by concerns over the secretive nature and close military links of the Chinese program.

Delta is truly annoying customers. Its solution is, oh, good luck with this

In RoboticsStartups
on 16 October 20215 min read

While China is boosting cooperation with the European Space Agency and others, interactions with NASA are severely limited by concerns over the secretive nature and close military links of the Chinese program.

China spacecraft collects moon samples to take back to Earth