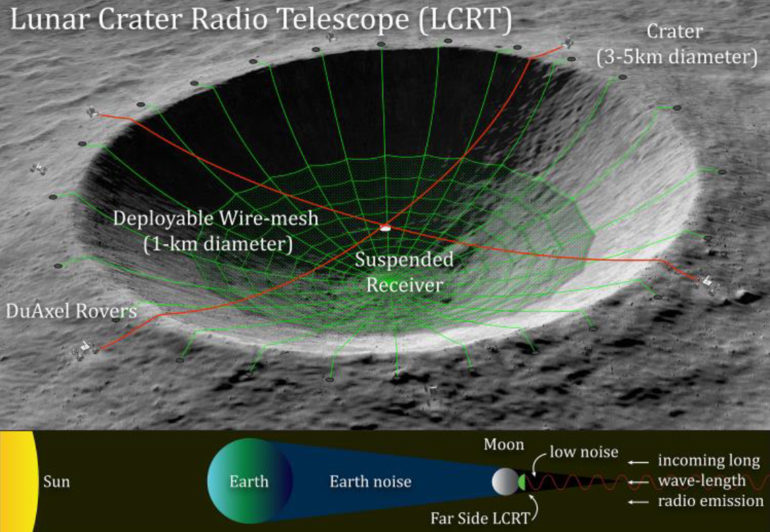 NASA is funding research for a giant radio telescope in a crater on the far side of the Moon.

The NASA Innovative Advanced Concepts (NIAC) Program, an incubator for radically futuristic and otherworldly concepts, has awarded a Phase 1 grant for what the agency calls the Lunar Crater Radio Telescope (LCRT) — an exciting idea that could be a major turning point in the search for extraterrestrial intelligence, as Wired‘s space and energy reporter Daniel Oberhaus pointed out on Twitter.

According to a description by research lead Saptarshi Bandyopadhyay, robotics technologist at NASA’s Jet Propulsion Laboratory in California, the idea is to capture the “tremendous advantages compared to Earth-based and Earth-orbiting telescopes” on the far side of the Moon, where researchers could observe the universe at much greater wavelengths than are normally reflected by Earth’s atmosphere.

These greater-than-10-meter long wavelengths have yet to be probed by humans and “could enable tremendous scientific discoveries in the field of cosmology,” according to Bandyopadhyay.

The Moon also “acts as a physical shield that isolates the lunar-surface telescope from radio interferences/noises from Earth-based sources… during the lunar night.” And when the Earth stands between the Sun and Moon, the area facing the far side of the Moon acts as a kind of low noise radio emission shadow.

The moonshot proposal — get it? — includes plans for a wire-mesh, a kilometer in diameter, that would be deployed by wall-climbing robots inside a large lunar crater. In other words, the plan is to cast a spider web-like mesh over an existing crater on the far side of the Moon to turn it…