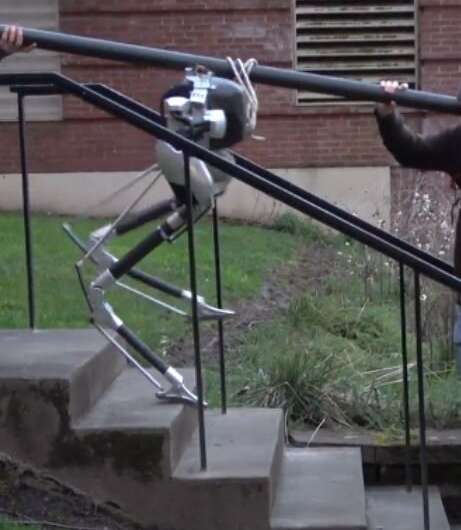 Agility Robotics, a branch of Oregon State University, has just revealed a new bipedal robot called Cassie. Unlike the many four-legged and four-wheeled robots currently in existence, Cassie will walk much more like a human. This kind of movement allows for far easier travel across diverse types of terrain while delivering packages or even contributing to disaster relief efforts.

Alongside disaster relief and search-and-rescue, Agility Robotics aims to prioritize equipping Cassie to deliver packages straight to people’s front doors. So far, the company has published a paper pre-print to the pre-distribution platform Arxiv which has been accepted for the 2021 RSS robotics conference.

At this point, Cassie has proven capable of traversing dirt, grass, a rickety dock surrounded by water and even standing outside in the heavy Oregon rain. Agility Robotics has explained that the ostrich-like physique stems from the real-life birds’ natural agility, durability and efficiency that they wanted to recreate in Cassie.

Although Agility Robotics is a new company, many of its researchers come from the ATRIAS project, one of the first initiatives to experiment with instilling humanlike gaits in robots. That said, Agility Robotics intends to surpass the work of ATRIAS by developing robots that can operate more independently beyond mere scientific demonstration. For now, researchers have been using results from ATRIAS, including center-of-mass motion to mimic human walking and spring-mass walking, to make Cassie the most efficient prototype yet.

Thus far, an essential improvement they have made from ATRIAS to Cassie entails an altered leg configuration which will enable smaller motors for enhanced operation. Furthermore, similar to humans, Cassie also enjoys a 3-degrees-of-freedom hip which lets the robot move backward, forward, from side to side and rotate both legs at the same time. Indeed, Cassie even has powered ankles in order to stand in place rather than consistently needing to move its feet as ATRIAS did.

Moreover, Agility Robotics also plans to make Cassie adaptable for use in medical prosthetics. With computer-to-human interfaces already on the rise, a robot such as Cassie could provide a great deal of assistance to human patients who are either missing limbs or struggle with locomotion. Therefore, while Cassie has some ways to go before being able to actually transport groceries upstairs, its designers have high hopes for general applications to locomotion.

While the initial supply of Cassie prototypes has sold out, Agility Robotics states that another batch will release in summer of 2021.

U. of Michigan expert puts bird-like robot through its paces

An obstacle avoidance system for flying robots inspired by owls