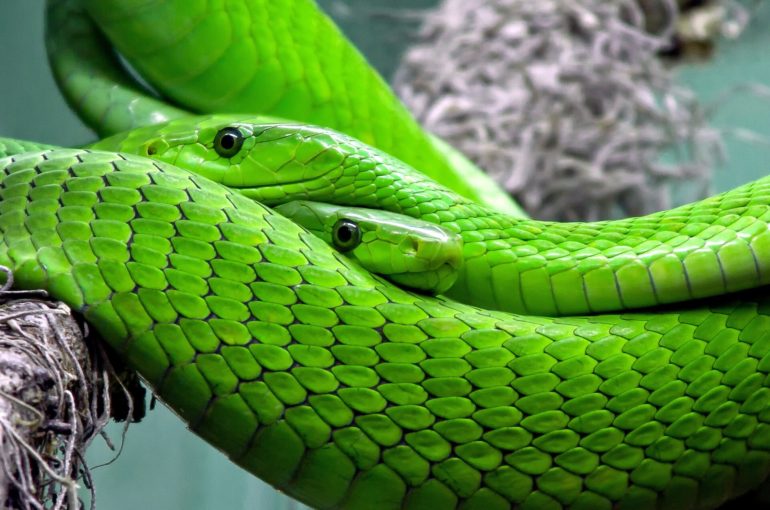 Some snake species slither across the ground, while others climb trees, dive through sand or glide across water. Today, scientists report that the surface chemistry of snake scales varies among species that negotiate these different terrains. The findings could have implications for designing durable materials, as well as robots that mimic snake locomotion to cross surfaces that would otherwise be impassable.

The researchers will present their results today at the spring meeting of the American Chemical Society (ACS).

The research began as a collaboration with Woodland Park Zoo in Seattle, explains Tobias Weidner, Ph.D., the project’s principal investigator. One of the zoo’s biologists told Weidner that not much was known about the chemistry of snake surfaces. “Biologists typically don’t have techniques that can identify molecules on the outermost layer of a surface such as a snake scale,” he says. “But I’m a chemist—a surface scientist—so I felt I could add something to the picture with my lab’s methods.”

In that initial project, the researchers discovered that land snakes are covered with a lipid layer. This oily layer is so thin—a mere one or two nanometers—that no one had noticed it before. The team also found that the molecules in this layer are disorganized on the snake’s back scales but highly organized and densely packed on belly scales, an arrangement that provides lubrication and protection against wear.

“Some people are afraid of snakes because they think they’re slimy, but biologists tell them snakes aren’t slimy; they’re dry to the touch,” Weidner says. “That’s true, but it’s also not true because at the nanoscale we found they actually are greasy and slimy, though you can’t feel it. They’re ‘nanoslimy.'”

In the new study, the team wanted to find out if this nanoslimy surface chemistry differs in species adapted to various habitats, says Mette H. Rasmussen, a graduate student who is presenting the latest findings at the meeting. Both Weidner and Rasmussen are at Aarhus University in Denmark.

Working with recently shed skins, Rasmussen compared the surface chemistry of ground, tree and sand snakes. She used laser spectroscopy and an electron microscopy technique that probes the chemistry of the surface by knocking electrons out of it with X-rays. The project was a collaboration with Joe Baio, Ph.D., at Oregon State University; Stanislav Gorb, Ph.D., at Kiel University and researchers at the U.S. National Institute of Standards and Technology.

Rasmussen found that the tree snake has a layer of ordered lipid molecules on its belly, just like the ground snake. But the sand snake, which dives through sand, has an ordered lipid layer on both its front and back. “From a snake’s point of view, it makes sense,” she says. “You would like to have this friction reduction and wear resistance on both sides if you’re surrounded by your environment instead of only moving across it.” Next, the researchers want to find out where the lipids come from and to look at variations across other snake species, including those that live in water. They would also like to identify the lipids, though Weidner suspects the chemical makeup of the lipid layer is less important than the organization and density of the lipid molecules it contains.

The work could have broad applications. “A snake’s slithering locomotion requires constant contact with the surface it’s crossing, which poses stringent requirements for friction, wear and mechanical stability,” Rasmussen says. Learning how snakes maintain the integrity of their skin when encountering sharp rocks, hot sand and other challenges could help in the design of more durable materials.

In addition, the researchers say, multiple groups are developing robots that mimic a snake’s slithering or sidewinding locomotion and—unlike robots with wheels—can therefore negotiate difficult terrain such as steep, sandy slopes. These groups have recently begun taking into account the microstructure of snake scales, Rasmussen notes, but scales’ surface chemistry is also critical to their performance. Bringing these fields together could one day lead to snakelike robots capable of helping in rescue operations or freeing a Mars rover stuck in sand, she says.