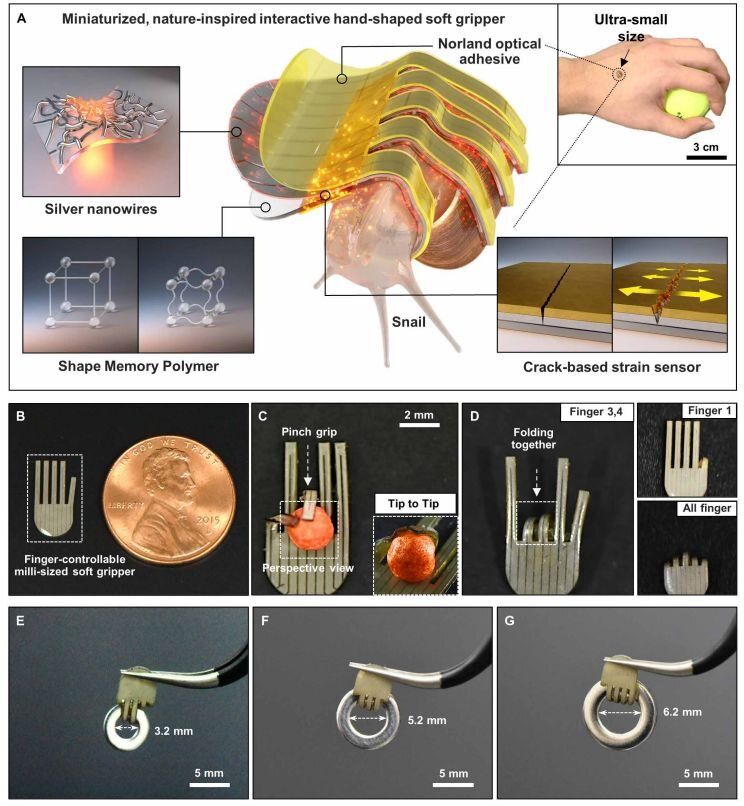 A team of researchers affiliated with a host of institutions in the Republic of Korea has developed a tiny, soft robotic hand that can grasp small objects and measure their temperature. They have published their results in the journal Science Robotics.

As the abilities of robots have increased, scientists have looked for new ways to use them. In this new effort, the researchers set themselves the goal of creating a robot hand that can hold and manipulate tiny objects without damaging them.

To that end, the researchers created a hand-shaped gripper with five fingers. Each of the fingers is just over a half-centimeter in length and eight times the width of a human hair. They are controlled by muscles made of a shape memory polymer, which changes shape when electricity is applied and then rebounds when the electricity is removed. The researchers also put tiny sensors in each finger to measure heat, vibrations and pressure and tested its capabilities.

The researchers found that their little robot hand was both gentle and strong. It could be used to open tiny bottles, for example, but was gentle enough to hold and manipulate salmon eggs. They also found that it could hold things much heavier than expected. The tiny hand weighs 25.4 milligrams, but is capable of picking up objects that weigh up to 30 grams. They also found the hand is capable of holding snail eggs for a period long enough for one to hatch. The hand also supplied a small amount of heat to keep the egg warm. And once the baby snail was born, the team used the tiny hand to measure its heart rate. They also found it could be used to grasp a blood vein in a live pig without stopping the blood flow or bruising. They suggest continued improvements to the design could one day allow doctors to use it to manipulate tissue in people—affixing fertilized eggs onto a uterus wall, for example.

A highly dexterous robot hand with a caging mechanism

Seals Are Making Creepy Ultrasound Noises Underwater, And We Have No Idea Why