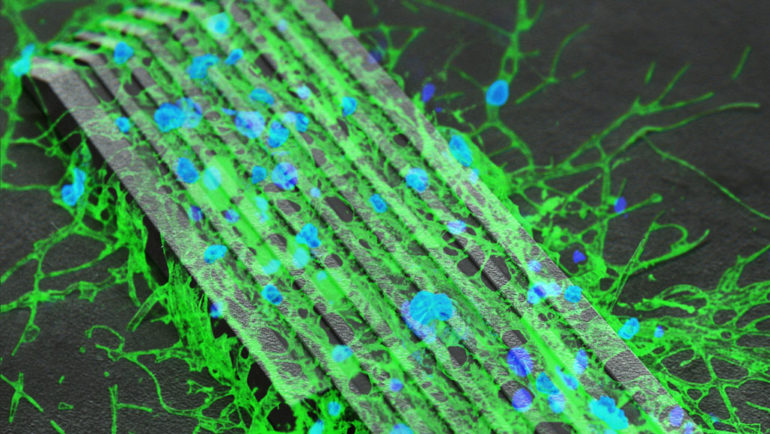 Tiny robots can operate as nerve cell connectors, bridging gaps between two distinct groups of cells. These microscopic patches may lead to more sophisticated ways to grow networks of nerve cells in the laboratory, and perhaps even illuminate ways to repair severed nerve cells in people, researchers report September 25 in Science Advances.

Engineers Eunhee Kim and Hongsoo Choi, both of the Daegu Gyeongbuk Institute of Science and Technology in South Korea, and colleagues first built rectangular robots that were 300 micrometers long. Slender horizontal grooves, about the width of nerve cells’ tendrils that exchange messages with other cells, lined the top.

These microrobots were fertile ground for rat nerve cells, the researchers found. As the cells grew, their message-sending axons and message-receiving dendrites neatly followed the robots’ lined grooves.

The nerve cells on the microrobot then grew out toward the clusters, while the cells in the clusters grew onto the bot. These new connections allowed neural signals to flow from one cluster of nerve cells to another, electrodes revealed.

Creating these neural bridges might help researchers design better replicas of complex nerve cell networks in the brain. Similar systems could also lead to new ways of studying nerve cell growth, experiments that could ultimately point to therapies for people with nerve injuries (SN: 8/11/16). Such precision building could also be useful in computing, allowing scientists to design and build biological computers with nerve cells.

Headlines and summaries of the latest Science News articles, delivered to your inbox