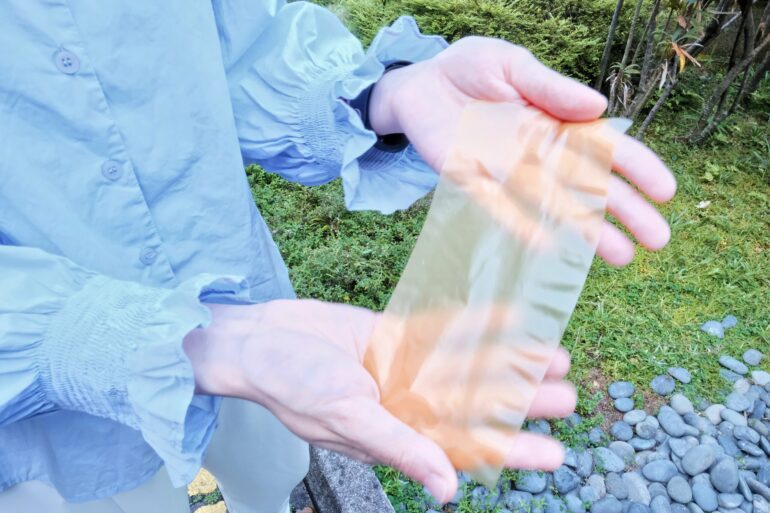 Scientists at Nanyang Technological University, Singapore (NTU Singapore) have developed a pollen-based “paper” that, after being printed on, can be “erased” and reused multiple times without any damage to the paper.

In a research paper published online in Advanced Materials on 5 April, the NTU Singapore scientists demonstrated how high-resolution color images could be printed on the non-allergenic pollen paper with a laser printer, and then “unprinted”—by completely removing the toner without damaging the paper—with an alkaline solution. They demonstrated that this process could be repeated up to at least eight times.

This innovative, printer-ready pollen paper could become an eco-friendly alternative to conventional paper, which is made via a multi-step process with a significant negative environmental impact, said the NTU team led by Professors Subra Suresh and Cho Nam-Joon.

It could also help to reduce the carbon emissions and energy usage associated with conventional paper recycling, which involves repulping, de-toning (removal of printer toner) and reconstruction.

Prof Subra Suresh, NTU president and senior author of the paper, said: “Through this study, we showed that we could print high-resolution color images on paper produced from a natural, plant-based material that was rendered non-allergenic through a process we recently developed. We further demonstrated the feasibility of doing so repeatedly without destroying the paper, making this material a viable eco-friendly alternative to conventional wood-based paper. This is a new approach to paper recycling—not just by making paper in a more sustainable way, but also by extending the lifespan of the paper so that we get the maximum value out of each piece of paper we produce. The concepts established here, with further developments in scalable manufacturing, could be adapted and extended to produce other ‘directly printable’ paper-based products such as storage and shipping cartons and containers.”

Prof Cho Nam-Joon, senior author of the paper, said: “Aside from being easily recyclable, our pollen-based paper is also highly versatile. Unlike wood-based conventional paper, pollen is generated in large amounts and is naturally renewable, making it potentially an attractive raw material in terms of scalability, economics, and environmental sustainability. In addition, by integrating conductive materials with the pollen paper, we could potentially use the material in soft electronics, green sensors, and generators to achieve advanced functions and properties.”

This innovation adds to the series of discoveries and technological advances pioneered by NTU researchers from many disciplines, whose cutting-edge scholarly research translate NTU’s commitment to sustainability into practices that benefit industry and society, in line with the vision outlined in the University’s Sustainability Manifesto released in 2021 and the NTU 2025 strategic plan.

A patent application has been filed based on this NTU innovation.

A more sustainable way of papermaking

Conventional paper is made of cellulose fibers found in wood, and the papermaking process involves energy-intensive steps that include logging, debarking, and chipping. With the pulp and paper industry accounting for 33 to 40 percent of all industrial wood traded globally[1], this form of papermaking adds to the global problem of deforestation and rising carbon emissions.

Pollen grains, in contrast, are generated regularly and in large amounts as genetic material carriers in plant reproduction. The process of making pollen-based paper is similar to traditional soapmaking, which is much simpler and less energy-intensive.

The scientists then used deionized water to remove unwanted particles from the resulting pollen microgel, before casting it into a 22 cm x 22 cm mold for air-drying. This forms a piece of paper that is about 0.03 mm in thickness or about half the thickness of the human hair.

Earlier research by the same NTU team has shown that pollen paper can bend and curl in response to moisture in the air. To “stabilize” the paper and to render it insensitive to moisture, the scientists immersed it in acetic acid—an active component in vinegar.

To demonstrate the printability of their sunflower pollen paper, the NTU scientists printed a painting from Vincent Van Gogh’s Sunflowers series using a laser printer. They found that the paper passed through the printer without any tear or damage.

None of the toner powder particles came off when tape was stuck on the printed image and removed, suggesting that the toner layer was well-deposited on the pollen paper surface.

While the colors of the image printed on pollen paper differed slightly from the same image printed on conventional paper (in part because of the differences in subsequent treatments), the image resolution and clarity on both types of paper were comparable.

The scientists also found that subsequent immersion in water did not damage or soften the printed pollen paper—an outcome essential for materials used for printing.

The NTU team next showed that the pollen paper could be unprinted. “Unprinting” is a concept that has emerged in recent years as an eco-friendly alternative to conventional methods to remove toner from the used paper before it is recycled. This unprinting involves weakening of the bond between the toner powder and the paper for laser printing.

The scientists did so by immersing the paper and rubbing it gently in a common lab reagent that is alkaline for two minutes. The pollen paper swelled when immersed in the alkaline solution, causing the toner layer to mechanically disintegrate and break away from the paper.

In Apps and WebCompaniesSmartphones
on 19 July 20217 min read

Swollen from the unprinting process, the paper was then left to shrink in ethanol for five minutes, and air-dried. After treating it with acetic acid, the paper was ready for printing again.

This process of treating pollen paper with acid, printing, then rinsing off the printed image, could be repeated another eight times without any loss of the paper’s structural integrity or the quality of the printed images.

This is in contrast to the unprinting techniques used for conventional paper which entail use of chemicals (e.g. chloroform or acetone) to weaken the bond between the toner and paper, or the use of high-intensity light to ablate the toner off the printed paper. Both these steps could damage the physical integrity of the paper, rendering it unsuitable for reprinting. In addition, the use of chemicals could pose environmental and health risks, said the scientists.

Apart from sunflower pollen, the NTU scientists found that pollen grains from camellia and lotus could also be used to make a paper-like material, similar to the sunflower pollen paper. Their work thus shows that more than one type of pollen could be used to create pollen-based alternatives to conventional paper.

This study builds on the team’s body of research on pollen conducted at NTU over the past few years. Profs Cho and Suresh and their research team previously demonstrated that pollen paper could bend, curl, and even crawl like a caterpillar in response to changing levels of moisture in the air, making the material a potential candidate for applications in soft robotics.

The same team also showed that they could get pollen paper to fold itself up into different 3D configurations by printing different patterns on the paper.