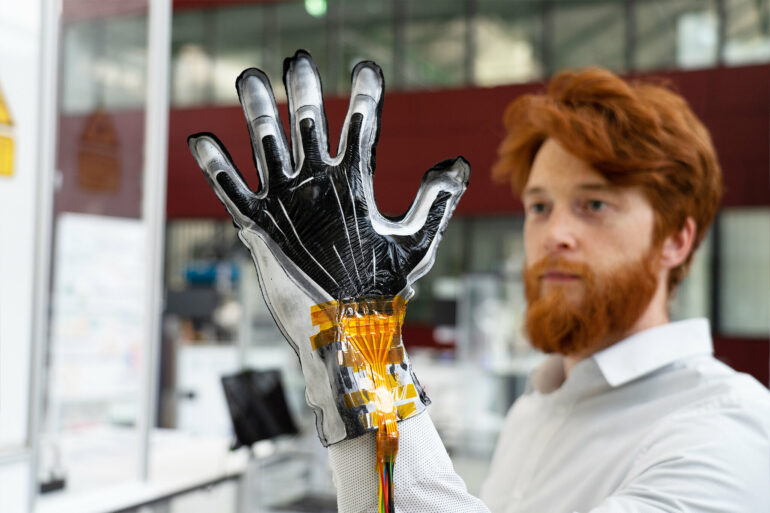 Imagine this: A smooth touchscreen display placed on top of a thin silicone polymer film suddenly generates the feeling of a tiny raised button under the user’s finger. Or how about the idea of wearing that same polymer film like a second skin? If used to line an industrial glove, the film can provide valuable feedback by gesture recognition and by sending tactile signals, such as pulses or vibrations, to the wearer. The research team led by Professor Stefan Seelecke of Saarland University will be at this year’s Hannover Messe, the industrial trade fair running from 30 May to 2 June, where the team will be demonstrating how smart tactile surfaces are now being used as novel human-machine interfaces.

Seelecke’s research team at Saarland University are using thin silicone films to give surfaces some very novel capabilities. The technology, which is able to create the sensation of a tactile “button” or “slider” on flat glass display screens, is literally bringing a new dimension to touchscreen interactions. The polymer film is able to change shape on demand to create the feeling of a raised button or a key on the surface of the display that the user can then use, for example, to navigate around a page or to enter data.

“Using this technology, we can make the user interfaces of smart phones, information screens or household devices more user friendly,” said Seelecke, who heads the Intelligent Material Systems Lab at Saarland University. If a user feels a pulse or vibration under their fingertips, they can then respond by tapping the screen. And because the user also experiences the slight resistance that we feel when we press a ‘real’ button or switch, they know that their response has been successful. For the blind and partially sighted, this sort of physical feedback is not a gimmick, but hugely valuable in their day to day lives.

If these high-tech films are used to line clothing, they can also act as a tactile human-machine interface. One example of this type of application would be to completely line the inside of an assembly operator’s glove with the highly flexible elastic polymer film and to use it as a sensor so that a computer system knows how the operator is moving their hand and fingers. “Our technology allows us to make the system smarter by introducing a complex sensor into a glove that the operator would anyway be wearing,” said Seelecke. And because the films are only about 50 microns thick, they don’t interfere with the operator’s work. If this sort of interactive glove is used in an Industry 4.0 environment, the system can recognize what action the glove wearer is trying to perform.

“The operator could, for example, control a process through the movement of their hand. When working on complex industrial plant equipment, the system could help to avoid potentially costly mistakes by sending a tactile signal, such as a tap, a pulse or a vibration, to the operator’s hand or fingers,” explained Seelecke.

The research team will be at this year’s Hannover Messe where they will be showcasing a prototype sensor-enhanced glove and a haptic display. Their novel polymer film technology could also be used in computer games to make the gaming experience more intense.

The specially prepared silicone films are smart material systems that can be powered simply by the application of an electric current. “A highly flexible electrically conducting layer is printed onto each side of the ultrathin silicone film to create what is known as a ‘dielectric elastomer’. When we apply a voltage to the elastomer, the two electrodes attract each other, compressing the polymer and causing it to expand out sideways, increasing its surface area, which in turn alters the electrical capacitance of the film,” explained Paul Motzki, a research scientist in Seelecke’s team.

When the operator bends a finger while wearing the glove, the film stretches like a second skin and this distortion causes a change in capacitance. The researchers are able to precisely assign a capacitance value to each position of the film as it distorts. So a specific capacitance value essentially represents a specific position of the operator’s finger, and a sequence of capacitance values represents the path taken by the finger as it moves. The film is thus a stretchable sensor that can effectively act as a sensory organ in engineering applications. The glove can sense how the hand moves and the smart touchscreen can sense whether the user has pressed a virtual button.

By combining measurement values and intelligent algorithms, the team has developed a control unit that can predict and program motion sequences and thus precisely control how the elastomer film deforms. “We make use of the properties of these dielectric elastomers to design drive systems,” explained Sophie Nalbach, the engineer who heads the Electroactive Polymers Group that is part of Professor Seelecke’s Intelligent Material Systems Lab.

By altering the applied electric field, the researchers can make the film pulse, make it take up some desired shape or make it oscillate or flex at some required frequency. When combined with the electroactive polymer system, an industrial glove is able to interact with its wearer or a display screen can interact with the user. “If we place the thin glass screen of a tablet computer on top of the polymer film, the film can perform a very rapid flexing motion underneath the user’s fingertip, which gives the user the impression that their finger is resting on a button or key,” explained Nalbach.

In CybersecurityGaming
on 27 August 20211 min read

At present, the team is working on a number of different research projects that are aimed at interconnecting these film-based drive systems so that they can communicate and cooperate collectively. To do this the researchers will need to impart new capabilities to surfaces and interfaces, which in turn requires further miniaturization of the technology. The dielectric elastomer films are lightweight, flexible, quiet, energy efficient and cost-effective to manufacture.