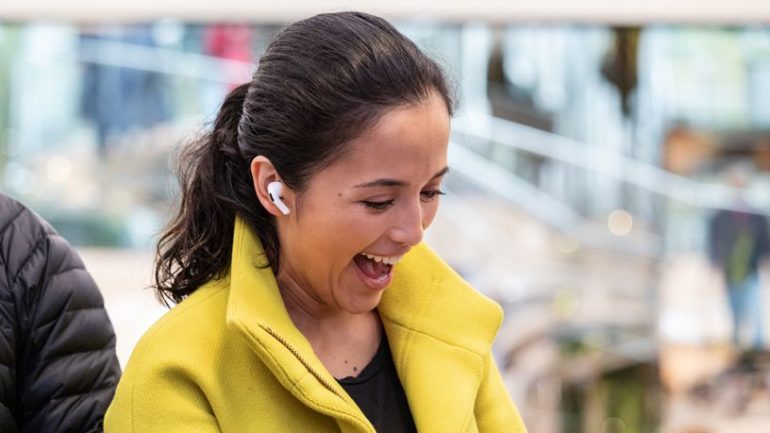 Will we see an Apple AirPods Pro 2 release date in 2021? It’s possible, but not super likely.

Rumors surrounding the Apple AirPods Pro 2, a new version of the AirPods Pro, have been circling since last year, after a report from DigiTimes claimed that the new true wireless earbuds will launch in the first half of 2020.

Of course, they never materialized – and now everything is pointing towards a 2022 release date after a report from Bloomberg that cites people “familiar with the plans” alleged that the AirPods 3 will launch in 2022 with even shorter stems at the bottom of the earbuds.

There’s also some confusion over whether Apple will upgrade the AirPods Pro or bring out a cheaper, ‘Lite’ version of the earbuds.

If they are an entry-level version of the noise-cancelling AirPods Pro, the rumored wireless earbuds might be cheaper than the most expensive Apple earbuds currently on the market (though a recent price leak may have scuppered hopes of cheap AirPods).

Whether the new AirPods Pro are budget-friendly or characteristically pricey, they’re sure to shake up the world of personal audio. After all, the current AirPods Pro are among the most popular noise-cancelling wireless earbuds on the market, thanks to their decent audio performance and excellent integration into the Apple ecosystem.

Will the new AirPods Pro 2 live up to the hype? We’ll have to wait and see – for now, here’s everything we know so far about the rumored earbuds, plus a few features we’d like to see.

AirPods Pro 2: cut to the chase

There’s been a bit of back and forth with AirPods Pro 2 release date rumors.

Initial rumors suggested new ‘regular’ AirPods would crash into the market before 2020 is out, but recent comments from industry analyst Ming-Chi Kuo suggest we may be waiting a while longer – speculating that the next-gen AirPods would start mass production in early 2021, with a new AirPods Pro model arriving in 2022 too (via AppleInsider).

That’s backed up by a recent leak from LeaksApplePro that revealed that the AirPods Pro 2 won’t be released until the end of 2021 at best – and possibly not until early 2022.

And, most recently, Bloomberg has further corroborated claims of 2022 release date.

According to tweet from LeaksApplePro, the AirPods Pro 2 will cost the same as their predecessors ($249 / £249 / AU$399) – which contradicts previous reports that the new earbuds will be an entry-level version of the AirPods Pro (hence the AirPods Pro Lite name).

It would be even better if Apple could launch a pair of true wireless earbuds at the $100 / £100 / AU$150 mark, as that would really shake up the competition with a genuinely affordable pair of Apple earbuds.

Interested in buying some Apple headphones now? Check out the best deals we’ve found below:

We don’t think there would be much point in releasing an entry-level version of AirPods Pro if they didn’t come with its best feature: active noise cancellation.

This was a true upgrade over the original AirPods, and signaled a shift in the true wireless earbuds market that means we can now expect to see features previously reserved for premium over-ear headphones in cordless models.

According to AppleLeaksPro, this feature is coming to the AirPods Pro 2 – and as posited by MacRumors, this could work in a similar way to the ear-based clip on pulse oximeters used in hospitals, which shine light through the earlobe to detect the amount of oxygen in a patient’s bloodstream. It’s not clear whether the design of the AirPods Pro would have to change materially to allow this to happen, but we think it’s unlikely that Apple would ditch the design that has made its earbuds so ubiquitous.

That’s not all. Earlier this year, Apple was awarded a number of new patents, one of which suggests that the next AirPods could come with a nifty feature for fitness fans, possibly cementing their place among the best running headphones in the world.

According to Patently Apple, the patent describes AirPods that use inbuilt sensors to “gather orientation information such as accelerometer measurements during user movements”.

That’s not all. Future Apple AirPods – including the rumored AirPods 3 and AirPods Pro Lite – could automatically pause or lower the volume of your music if they detect hazards in your surroundings, according to a patent granted to the company on August 11.

The patent describes a pair of true wireless earbuds that are capable of adjusting their audio output based on the user’s activities and location, including “adjusting audio volume, stopping or preventing audio from playing, providing feedback, directions, encouragement, advice, safety information, instructions, and the like”.

Apple has also been awarded a patent that describes the ability to control true wireless earbuds with futuristic ‘in-air gestures’.

Spotted by Patently Apple, the patent describes how in-air gestures – for example hovering a hand over the AirPods – could work alongside the touch controls already employed by the AirPods Pro, allowing you to trigger different actions.

In AICompaniesCybersecuritySmartphones
on 16 December 20191 min read

More recently, Apple filed a patent describing earbuds that could be controlled by touching your face, shaking your head, and even clicking your teeth together. Whether these features will actually materialize remains to be seen, but it’s clear that Apple is investigating some exciting new tech for its wireless earbuds.

According to a Bloomberg report that cites “people familiar with the plans” the AirPods Pro will get a design overhaul in 2021, eliminating the ear stems altogether, for a “more rounded shape that fills more of a user’s ear” – perhaps taking a few design cues from the Samsung Galaxy Buds and the Google Pixel Buds.

That design isn’t set in stone, however. Bloomberg says that fitting the features of the AirPods Pro, including the antennas and microphones, into a more compact build has been a challenge so far, which “could result in a less ambitious design when the final product is finalized”.

If Apple does keep the protruding stems we’d love the brand to include haptic feedback when you touch them – it would add a little bit of tactility to the user experience that we think would be really beneficial.

AirPods Pro 2: what we want to see

Some earfins wouldn’t go amiss to make the AirPods Pro Lite appeal to the running crowd. While we find that the AirPods Pro are generally quite secure during workout sessions, some extra security could win over diehard fans of the earhook-toting Beats Powerbeats Pro.

Another way to steal some custom from Beats (and therefore itself)? Adding some cool color options to the AirPods Pro Lite. If they really are a cheaper version of the AirPods Pro, and therefore not a flagship product, what’s the harm in a little experimentation? We’d love to see true wireless earbuds in the same space gray and rose gold colors we’ve seen with some iPhone and MacBook Pro models.

The battery life offered by the AirPods Pro doesn’t match some of the best true wireless earbuds of 2020. While perfectly acceptable, just under 25-hours of playtime has been far outmatched by the likes of the Lypertek PurePlay Z3 2.0 (though these admittedly don’t come with noise cancellation, which can drain battery life).

While the AirPods Pro don’t sound bad by any means, they can’t compete with the Sony WF-1000XM4 and Cambridge Audio Melomania 1 Plus in this respect.

For a start, we’d like to see aptX HD support, which would allow for wireless streaming of hi-res audio codecs at 24-bit/48kHz – which Qualcomm claims makes for better-than-CD quality. That way, Apple could get the audiophiles on side – and it seems a bit of an oversight now that the original AirPods Pro can support other codecs like Dolby Atmos spatial audio and Apple Music now offers lossless audio at no extra cost for subscribers.

We’d also like to see the ability to customize the EQ of the AirPods Pro, which could make them suitable for a wider range of musical genres. While the original earbuds are great for listening to pop music, they just don’t have the right EQ curve to do justice to classical music.