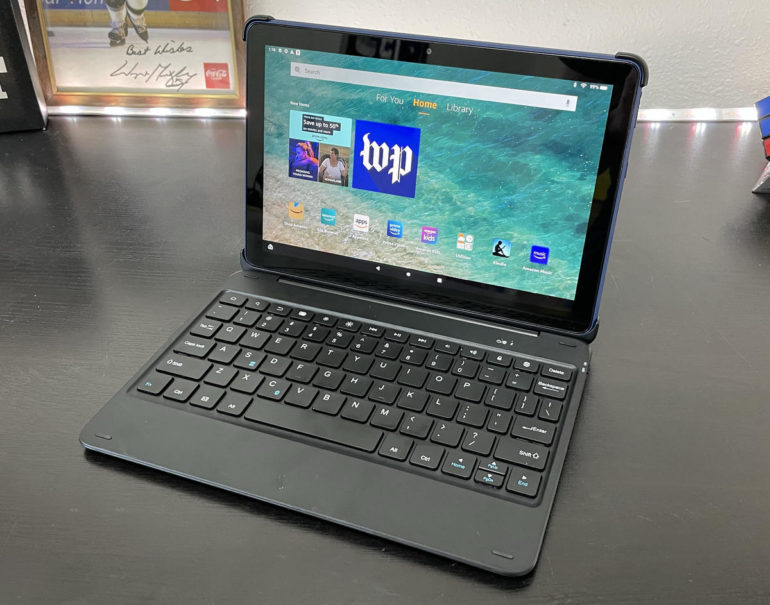 Amazon’s tablets are known for being cheap, somewhat slow, but good enough to access your Kindle library, stream shows in Prime Video or browse the web. The tablets aren’t known for being fill-in for your work laptop, but Amazon is looking to change that perception.

The company announced the new $149 Fire HD 10 and $179 Fire HD 10 Plus tablets, complete with new kids editions, back in April. Alongside the refreshed design and new components, Amazon also announced a new productivity bundle. The bundle adds $70 to the cost of either Fire HD 10 model and includes a 1-year subscription to Microsoft 365 as well as a Bluetooth keyboard built specifically for the tablet.

For the last few weeks, I’ve been testing the standard Fire HD 10 and the productivity bundle — a kit that would cost you $219. As someone who uses the iPad as my main computer and laptop replacement, I was eager to see how the Fire HD 10 compared to the iPad Pro.

I don’t want to fully spoil it, but the experience fell short in a lot of areas. Namely app availability and performance.

Amazon debuted a new design with the Fire HD 8 last year, and that same aesthetic has carried over into the Fire HD 10 and HD 10 Plus. The edges and corners are now rounded, the front-facing camera is now centered when the tablet is horizontal — it’s a welcome design change.

When the tablet is docked in the included case, you’ll find the volume and power buttons to the right of the screen. That’s also where you’ll find the USB-C port that’s used for charging (another welcome change), and a 3.5mm headphone jack.

I really enjoyed the design of the Fire HD 8, and found that it translated well to the slightly larger Fire HD 10. It’s comfortable to hold and use as a standard tablet, tapping and swiping on the screen when browsing the web, the Amazon store or looking for a new book to read.

On the bottom of the tablet is where you’ll find the MicroSD card reader, where you can add up to 1TB of storage.

To be clear, the keyboard/case combo that comes in the productivity bundle isn’t made by Amazon. It’s made by Finite, a company I hadn’t heard of until I received the review unit.

The keyboard uses Bluetooth to connect to the tablet, and is also charged via a USB-C connector.

The keyboard doubles as a protective case for the Fire HD 10. You can detach the tablet, leaving the back of the case installed, and carry the Fire HD 10 around, and then easily place it back into the hinge that’s sturdy and holds the tablet in place when you want to use it in a more traditional laptop mode.

The keyboard itself is small, an expected side effect of a smaller tablet. There are shortcut keys to open apps in split screen mode (handy if you need to copy notes to an email), but I found the keys somewhat awkward to activate due to the size of the keyboard and the keys.

Amazon boosted the specs of the Fire HD 10 with an octa-core 2.0GHz processor and 3GB or 4GB of memory (a 50% increase compared to the previous version). The Fire HD 10 Plus, which costs $30 more, has 4GB of memory, a different finish on the tablet’s housing, and will wirelessly charge on any Qi-compatible pad. Or you can purchase the Amazon wireless charging dock built for the tablet that turns it into an Echo Show.

The 10.1-inch Full HD display is slightly brighter (10% according to Amazon) than the preview Fire HD 10’s screen. You’ll get about 12 hours of battery life out of the Fire HD 10 or HD 10 Plus, which is a little higher than what I saw during my testing and use. But a normal workday’s worth of battery life isn’t out of the question.

See also: Best iPad in 2021: Which iPad model should you buy?

You have two options when it comes to storage: 32GB or 64GB. Regardless of your choice, both models support expandable storage up to 1TB via a MicroSD card.

Australian telcos have blocked over 55 million scam calls since December

Performance has never been a Fire tablet’s highlighting feature, and that’s still true with the HD 10. There’s a slight delay when navigating through the interface, apps open slower than what you’d find on, say, an iPad or Galaxy Tab.

App availability in Amazon’s own Appstore have always been a problem, and that hasn’t changed. Because all of Amazon’s Fire HD tablets are running the company’s own forked version of Android, forgoing any Google services including the Play Store, developers have to list their apps in Amazon’s Appstore. The result is that many of the key Android apps that users have grown to rely on are nowhere to be found on a Fire tablet.

For example, Slack, a key app for productivity for many of us, isn’t listed in the Amazon Appstore. You can still access Slack using the built-in Silk browser, but it’s not the same experience as a dedicated app. 1Password, a popular password managing app for consumers and business users alike, is also missing.

As I already mentioned, you won’t find any Google apps available on the Fire HD 10, so that leaves you with using services like Gmail, Google Workspace or Docs through the included browser.

Zoom is available in the App Store, as is nearly all of Microsoft’s mobile apps, including Teams, Outlook, Word, Excel and the rest of the Office suite.

Effectively, you have an Amazon tablet that gives you direct access to all of the company’s apps and services, combined with a dedicated tablet for those who are entrenched in Microsoft’s Microsoft 365.

At the end of my time using the Fire HD 10, I’ve come to the conclusion that this is a tablet that’s better left to serve as an entertainment device, with the occasional email or document typed out on the keyboard.

It can work, in a pinch, if your main laptop or computer is being repaired, or you’re looking to do light work while traveling. But there are just too many concessions, with apps and performance, for it to truly earn its productivity namesake.