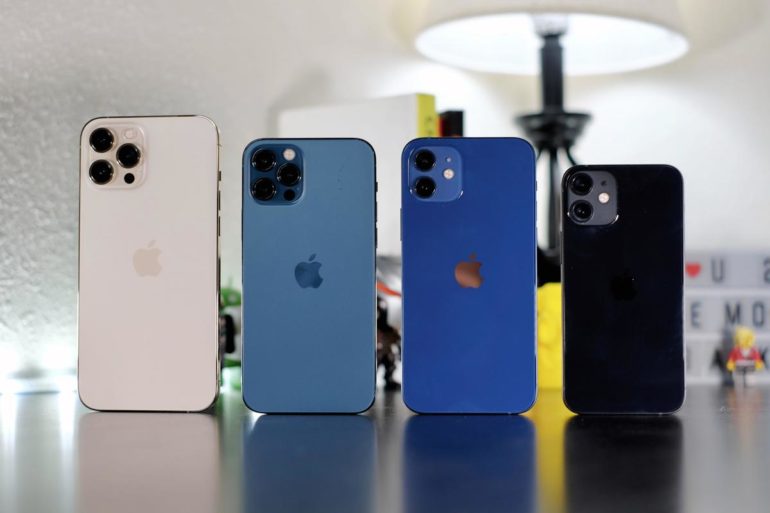 Apple released four new iPhone 12 models in a total of three different sizes. The iPhone 12 and iPhone 12 Pro both have a screen size of 6.1-inches, while the larger iPhone 12 Pro Max comes in at 6.7-inches; the largest for any iPhone model to date.

Apple sent me all four iPhone 12 models to test. After using the iPhone 12 Pro, I decided to live with the iPhone 12 Mini as my main phone for about a week. And you know what? After the initial shock of downsizing to a smaller device, I found it to be every bit as good as the iPhone 12 Pro, except for two things: Battery life and camera, but even then, it’s close.

I’m not going to focus on some aspects of the iPhone 12 Mini that overlap with the iPhone 12 Pro, like 5G. The experience on both phones, for me, is the same — AT&T hasn’t launched 5G in southern Colorado. If you want more of my thoughts about 5G, read my iPhone 12 Pro review.

The entire iPhone 12 lineup uses the same flat-edge design, a pseudo throwback to the iPhone 4. On the right edge, near the bottom, you’ll find a cutout that looks a lot like the Apple Pencil 2 charging pad found on the iPad Pro and iPad Air. But it’s not for the Pencil, instead, it’s a cutout of the mmWave 5G antenna. Just above that is the side button, used to wake and lock the phone. On the opposite edge is Apple’s traditional mute switch and the volume up/down buttons.

Apple didn’t make the switch to USB-C ports on the iPhone 12, so you’ll find a Lightning port on the bottom of the phone once again this year.

The iPhone 12 Mini is available in black, white, blue, green and red. Storage options include 64GB, 128GB and 256GB. I do wish Apple had made 128GB the starting storage amount for the non-Pro models, especially with all of Apple’s services like Arcade and TV+ with downloadable content.

As previously mentioned, the 12 Mini has a 5.4-inch display. Apple is using its Super Retina XDR displays across the entire iPhone 12 lineup, instead of limiting the arguably superior screens to the Pro models.

On the back of the 12 Mini you’ll find two cameras. A 12-megapixel ultra-wide camera and a 12-megapixel wide camera. Both cameras take advantage of Apple’s Deep Fusion technology to capture more detail, record HDR Dolby Vision 4K video, and can be used to capture night mode photos.

The iPhone 12 Mini’s 5.4-inch display goes nearly edge to edge, save for the notch cutout at the top where Apple’s TrueDepth camera system that enables Face ID is found. Apple hasn’t talked about any speed improvements or changes to Face ID, but it does feel faster across the entire iPhone 12 lineup; perhaps something that the A14 Bionic processor enabled.

My favorite aspect of the 12 Mini is how easily it fits into my pocket. On more than one occasion I found myself frantically looking for the Mini on my desk, only to realize it was still in my pocket. But after using the iPhone 11 Pro Max for the past year, I was used to knowing when my phone was still in my pocket — namely because it was ready to fall out nearly all the time.

I try to avoid reading any reviews before I have a chance to thoroughly test a device, but I still see headlines in Feedly or on Twitter. So going into my review of the iPhone 12 Mini, I knew that battery life was a common complaint. It makes sense: The Mini is smaller, therefore has a smaller battery, but still powers Apple’s A14 Bionic processor and an OLED display. And for the first couple of days, I was disappointed in the Mini’s battery life.

I would see the 20-percent warning pop up around 5 p.m., and a few hours later the Mini would be ready to power down. After the second day of use, I checked the Battery settings to see if there was an errant app causing the excess drain and saw that Photos was using up a lot of juice in the background.

After investigating some more, I realized that the Photos app was still trying to index my iCloud Photos library — something that normally happens overnight as you charge your phone. That night as I put the Mini on a MagSafe charger, I opened the Photos app and tapped on the Resume button to ensure that it finished the process while the phone charged.

With the sync finished in the morning, battery life was almost on par with the iPhone 12 Pro. Meaning it would get through a full day of use for me, but just barely. If I were traveling or out of the house, where charging isn’t easily accessible, battery life would be something on my mind with the Mini, however, it’s not a deal-breaker.

According to iFixit’s teardown, the 12 Mini has a 2,227mAh battery, while the iPhone 12 and 12 Pro share a 2,815mAh battery. The 12 Mini is also limited to 12W of wireless charging through a MagSafe adapter, while the other iPhone 12 models all charge at 15W.

In CompaniesSmartphones
on 3 July 20211 min read

As for performance, the iPhone 12 Mini is just as impressively fast and responsive as the Pro is. But that’s not really a surprise, since the entire iPhone 12 lineup shares the same core design, inside and out.

The main differences between all four models comes down to the iPhone 12 Mini and iPhone 12 lacking a Lidar sensor and telephoto camera found in the iPhone 12 Pro and 12 Pro Max, and the housing of the former pair is made of aluminum instead of stainless steel as we see in the Pro models.

One consistent bug I’ve seen across all four models is that often when I begin typing in the Messages app, the first 10 keystrokes or so don’t show up for a second or two. I have to actually stop typing, wait until the phone catches up, and then continue typing. The rest of the conversation is fine unless I leave the app for a while and then come back. It’s a weird bug, but hopefully, one Apple fixes in an update.

Ultimately, the iPhone 12 Mini isn’t for me, simply because I want it to have the same camera versatility as the Pro models. But even then, the camera takes clear and crisp photos that almost anyone would be happy with.

Battery life should only be a concern if you’re a frequent traveler or someone who lives on their phone.

If you despise large phones and look forward to the day the trend of larger displays vanishes, then the iPhone 12 Mini is for you. By the end of my week of testing, I found myself truly enjoying the pocketable size of the Mini. I know I’m dreaming of the day Apple makes a small iPhone with a three-camera array and Lidar sensor.