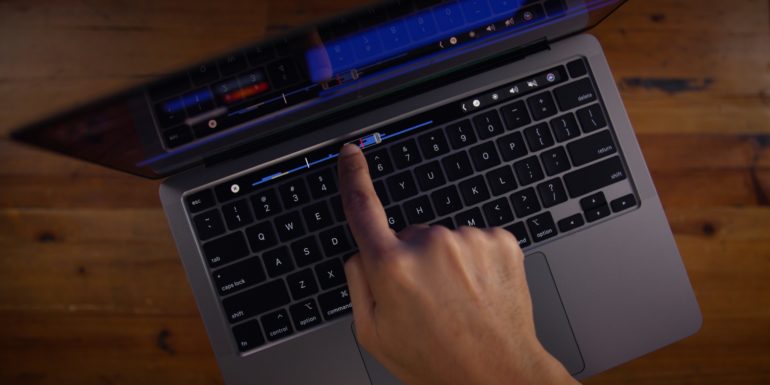 It appears Apple is planning an interesting touch for a future generation of its most powerful notebook, the Macbook Pro. In a recently disclosed patent application, Apple has indicated it will introduce Force Touch to an upgraded version of the Touch Bar.

Apple unveiled Force Touch with the inaugural version of its smartwatch in 2014. Shortly after, the feature was included with the trackpad on the MacBook Pro and, under the name 3-D Touch, was used on iPhone models.

Force Touch technology relies on pressure sensors to detect the strength of a tap on a trackpad and provides haptic feedback to simulate click sounds. Force Touch provides for expansive customization of routine keyboard tasks.

Many applications, including music and video editors, offer numerous functions that can be more easily accessed through Force Touch controls than with key combinations or function keys.

The Touch Bar is currently included only on the MacBook Pro 13- and 15-inch models. It is an OLED bar running across the top of the keyboard, replacing the region where function keys normally reside. Its functionality changes depending on the programs used and the activity within the app currently being employed. Primary systems controls such as screen brightness, audio and video playback and volume can be instantly accessed through the Touch Bar, as well as Touch ID logons, predictive type, finder functions, move and copy functions, scrubbing through photos and image editing.

The Touch Bar is not without its detractors. Some complain it is inconveniently placed and is an irritation when an accidental touch executes an unwanted action. One exchange between a fan and an unfazed commenter on the 9to5Mac web site, where notice of the patent was first made last week, is indicative of the passionate views of supports and detractors.

Aussiefanboy said, “I am so glad Apple is innovating the Touch Bar. I’m gonna cop flack for this but I don’t care. I LOVE the Touch Bar. It is so useful for my workflow and has saved me so much time in the apps where I use it. Maybe it doesn’t belong on all Pros but for productivity apps, being able to bold, underline, change color etc. with the click of one or two touches while I’m creating content is amazing.”

But Mustrashh responded: “I hate the touchbar. Here are my main issues with it: 1) I have to look away from the screen to use it; 2) Developers tend to use function keys. A lot; 3) Touch bar can freeze, so I have to kill it via terminal. Function keys don’t freeze. Ever; 4) I can’t type by feel with touch bar; 5) Touch bar is barely visible outdoors in bright sun light; 6) Touch bar takes away from battery life.”

“How will this solve those 6 points?” he asked.

Apple did not specify what features the new Force Bar might offer, but observer say one function may be to minimize the number of accidental clicks users make with the current Touch Bar.

As always, there is no confirmation the new feature will ultimately be utilized and no estimate of when we might first see the new Force Touch in a future MacBook release.

Review: Apple’s new MacBook Pro looks the same, but inside it’s much improved