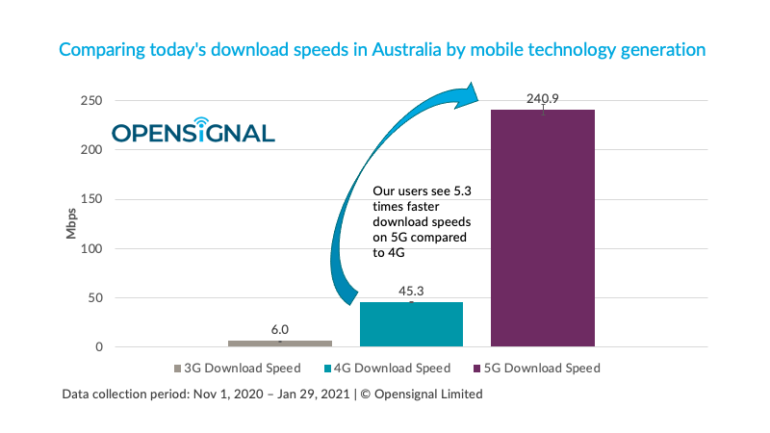 While 5G may still be in its infancy, OpenSignal has revealed that Australian users are already seeing a huge boost in mobile speeds when compared to 3G and 4G connections.

The speed gap for average download speed between 3G and 4G was smaller at 39.3Mpbs, but still significant as 4G was still 7.5 times faster than the average 3G download speed of 6Mbps.

“[The] average 3G upload speeds were 6.1 times slower than those seen when connected to 4G. This indicates that currently, the 4G/5G uplift on average upload speeds is much less in percentage terms than the difference seen when moving from 3G to 4G,” OpenSignal said.

When OpenSignal examined the experience smartphone users had for different activities, it rated this based on a scale that went from poor, fair, good, to very good, and then excellent.

For streaming video over mobile connections, the speed connection on both 5G and 4G were rated excellent at 81.5 points and 75.4 points, respectively. In contrast to 3G, which was only fair, scoring 53.8 points.

“An Excellent rating means that there was a very consistent experience across all users, video streaming providers and resolutions tested, with fast loading times and almost non-existent stalling,” OpenSignal explained.

The 3G game experience, on the other hand, was rated very poor at 36.4 points, with almost all users experiencing notable delays when they played games on the 3G network, OpenSignal said.

OpenSignal added that as 5G matures and mmWave 5G is introduced, the experience gap between 5G and 4G is likely to widen.

“In our analysis we are comparing 3G with 4G as the two technologies are today. Back when 4G was first launched, the mobile experience ‘gap’ between 3G and 4G would have been rather different,” it said.

“Finally, once the majority of smartphone users are spending the majority of their time connected to 5G services, consumer app developers will develop their products to take full advantage of 5G’s capabilities. Once that starts happening, the 4G/5G experience will become increasingly differentiated because some apps and services will require 5G.”