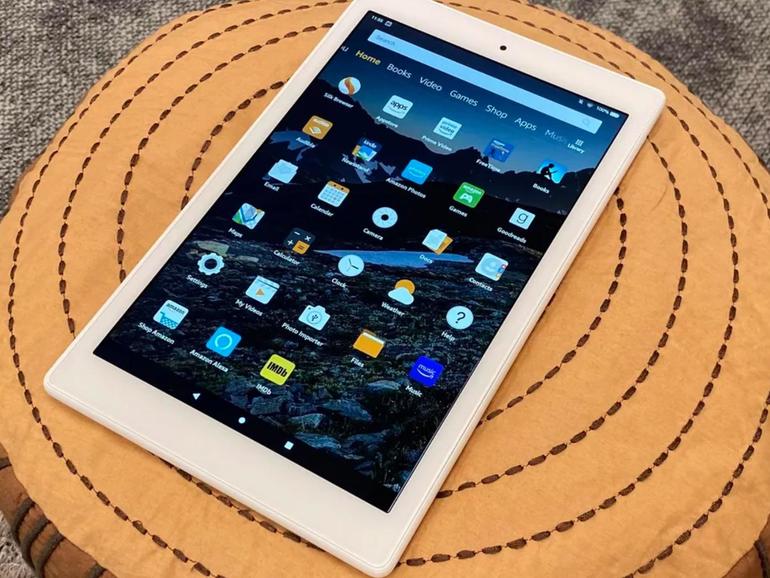 When it comes to finding a tablet that runs Android, your options are fairly limited. Most of the blame for that falls on Google, which abandoned its Android tablet hopes and dreams years ago, opting instead to integrate Android apps into Chrome OS.

As far as we’re concerned, there are only two main players in the Android tablet market: Samsung and Amazon.

Samsung’s tablet lineup consists of several different models, with a wide range in price and features. Meanwhile, Amazon’s tablets, which technically run a forked version of Android called Fire OS, are designed and sold at budget prices, integrating all of the online shopping giant’s stores and services.

Below, you’ll find more details about some of the standout tablets from Samsung and Amazon.


Samsung’s entry-level Galaxy Tab A 8.0-inch is a compact tablet that can hold its own against the higher-end models. It’s not going to blow you away with overall performance, but it is more than capable of running your favorite apps, some light gaming, and streaming your favorite shows.

It has a 5,100mAh battery, 32GB of included storage, with microSD support up to 512GB, and a quad-core processor.

Color options include black or white.


Samsung’s Galaxy Tab S6 Lite is a step up from the Tab A 8.0, adding a larger display, faster processor, and 64GB or 128GB of storage. But perhaps the most appealing aspect of the $349.99 tablet is that it includes an S Pen. The stylus is one of Samsung’s most iconic accessories, and having it included with a tablet — or any device, really — is a big deal.

The Tab S6 Lite’s display isn’t as clear as Samsung’s more expensive tablets, and its performance struggles are most noticeable when switching between apps or gaming. The S Pen can be used to navigate the interface, or in apps like Samsung Notes to draw and sketch. If you run out of storage space, add a 1TB microSD card to the Tab S6 Lite.


The Tab S7 is one of Samsung’s latest flagship tablets, aimed directly at taking on Apple’s iPad Pro offering. The S7 has 8GB of memory, starts at 128GB of storage, and uses Qualcomm’s Snapdragon 865 Plus processor. The 11-inch LCD display is compact enough to make the tablet portable, but high-resolution and clear enough you’ll be happy watching your favorite shows or gaming on it.

If you purchase the optional $199 keyboard cover, you can take advantage of Samsung’s DeX platform that turns the S7 into, essentially, an Android-powered laptop, with apps showing up as small windows instead of full-screen.

Included in the box with the S7 is an S Pen, which can be used to write or draw in your favorite apps, just like you can on the Samsung Galaxy Note lineup.


The Galaxy Tab S7 Plus is Samsung’s top of the line Android tablet, combining the same core experience of the Tab S7 with a larger 12.4-inch Super AMOLED 4K display, an S-Pen stylus, up to 512GB of internal storage, and up to 14 hours of battery life during video playback.

Just like the S7, you can add the $229 keyboard accessory to the tablet, turning it into a DeX-powered 2-in-1 that you can hammer out emails or work reports, or sit back and watch your favorite YouTube channel.

Samsung’s DeX platform turns the typical Android experience and interface into a laptop-like experience, complete with windows you can move around and resize. You can even connect the tablet to an external monitor and use DeX.

Microsoft to change how users can test Teams features


Gone are the boxy and square tablets from Amazon. The company completely redesigned the Fire HD 8 lineup, with a more rounded look and feel. There are actually two new tablets: The Fire HD 8 and Fire HD 8 Plus. We are only included the HD 8 Plus because it’s worth the extra $20, thanks to the added memory and support for wireless charging.

The Fire HD 8 runs Amazon’s Fire OS. It runs Android apps, but you’re limited to apps that are available in Amazon’s own Appstore. Like with most tablets in this price range, performance can be sluggish at times, but you’ll have no issues shopping, browsing Facebook, or checking your email on the Fire HD 8 Plus.


The Fire HD 10 is a slightly older, but bigger version of the Fire HD 8. It boasts an octa-core processor, 2GB of memory, and microSD card support up to 512GB. The full HD display looks clear, and provides plenty of space for gaming or watching a movie.

You’ll get up to 12 hours of battery life on a single charge, and if you want to pay a little more, you can get a 15W charger to speed up the charge time.

Like the Fire HD 8, the Fire HD 10 runs Fire OS, so your app options are somewhat limited, but most of the big-name apps like Zoom, Facebook Messenger, and Spotify are available.