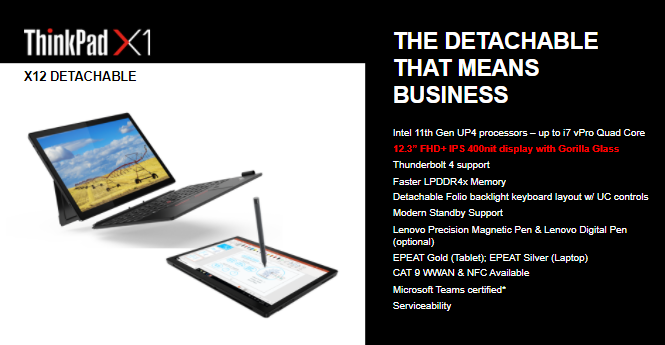 At CES 2021, Lenovo launched a new detachable ThinkPad device, the X12 Detachable. Touted as being the first ThinkPad detachable device released in a few years, Lenovo said the offering was created due to customer demand for detachables.

The ThinkPad X12 Detachable comes with an Intel 11th Gen UP4 chipset, a 12.4-inch FHD display, Wi-Fi 6, a detachable folio keyboard, and uses the same magnetic pen as the X1 Titanium Yoga.

The announcement of the ThinkPad X12 Detachable at CES 2021 came with the release of the rest of Lenovo’s ThinkPad range, including the latest iteration of the ThinkPad X1 Carbon. The X1 Carbon gained a 10nm Intel 11th Gen CPU, along with minor changes, such as a slightly wider 110mm touchpad, the addition of Dolby Voice, and moving the fingerprint reader to the power button.

It also has a new one-bar hinge system and uses two fans instead of one, which Lenovo claims improves the laptop’s venting and thermal capability while also lessening fan noise.

Lenovo also unveiled the ThinkPad X1 Titanium Yoga, which has been touted as the company’s flagship convertible laptop for this year and the thinnest convertible ever offered by the company.

The ThinkPad X1 Titanium Yoga has a thickness of 11.5mm, weighs 1.15kg, and comes with a 13.5-inch QHD display. It will sport an Intel 11th Gen Core chip, Iris Xe integrated graphics, two Thunderbolt 4.0 ports, four microphones, and comes with a magnetic attached pen. Its main draw is having a screen with 360-degree flexibility, Lenovo said.

All of this year’s ThinkPad models will come with the option of 5G. The 5G for these laptops will be sub-6GhZ 5G, however, and not be capable of mmWave speeds.

Lenovo also said this year’s ThinkPad models all have human presence detection — the ability to log in without touching the laptop through Windows Hello — and improved blue light levels compared to previous models.

The Chinese company also unveiled the ThinkReality A3, which are a new pair of smart glasses. The glasses are aimed at “transforming work across all levels” through virtual displays, 3D visualisation.

In Apps and WebCompaniesSmartphones
on 10 October 20206 min read

“These are the most advanced and versatile enterprise smart glasses in the market and it’s part of a total strategy of bringing comprehensive digital solutions to help with that intelligent transformation that businesses always tell us that they’re working so hard towards,” Lenovo senior story technologist Kevin Beck said.

“In this new normal of distributed workforces and hybrid work models, businesses tell us they’re looking for new technology and they want to collaborate more intelligently.”

The glasses will come in two models, the PC edition and the industrial edition, with the former being able to be tethered to a PC and the latter having the capacity to be tethered to a Motorola flagship smartphone. Both allow for users to wear prescription lenses while using the ThinkReality A3, Lenovo said.

In announcing the product, Lenovo said it focused on flexibility when developing the glasses so that it could be “immersive but not isolating”. According to Lenovo, the industrial edition of the glasses allows for work to be performed in factory floors, labs, as well as retail and hospitality spaces.