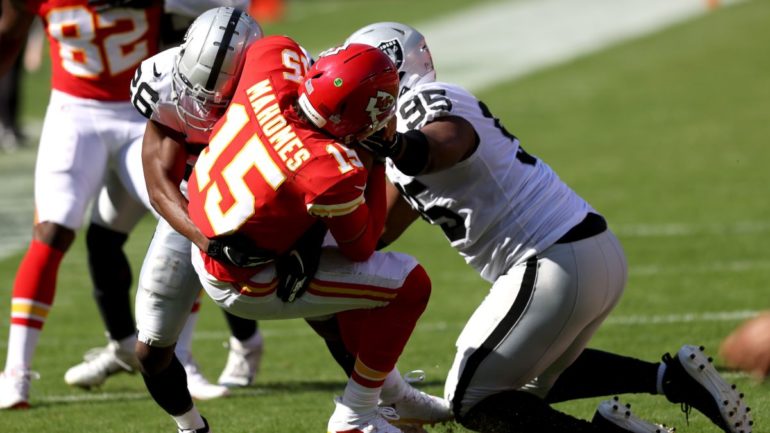 We all know what happened the last time these two faced off. Week 5 produced the first major shock of the season, and Andy Reid has gone all Michael Jordan in the build-up to today’s rematch, getting fired up about an apparent bus ride victory lap the Raiders took after defeating the reigning Super Bowl champs. Tensions are simmering very nicely indeed, and you can read on as we explain how to watch the NFL online and get a Chiefs vs Raiders live stream wherever you are right now.

Kick-off time for today’s Chiefs vs Raiders game is 8.20pm ET/5.20pm PT, which is 1.20am GMT in the early hours of Monday morning. A number of TV and streaming options are available for the game, and you can always enjoy your favorite NFL coverage wherever you are by using a reliable VPN.

Better still, both franchises are in outstanding form. The Chiefs have won four of four since that night, and the Raiders are on a run of three victories from three, having lost to the Bucs a week after those heroics at the Arrowhead.

It’s no surprise to see Kansas doing so well again this season, but after an inconsistent start the Raiders have emerged as genuine contenders too, which is all the more impressive considering their switch from Oakland to Vegas after a disappointing 2019 campaign.

KC are, naturally, the favorites, and they’ve had a bye week to plot and obsess over their revenge. Perhaps that explains Reid’s bizarre bus outburst. But while Patrick Mahomes has had a literal rest, it wasn’t really too different for Derek Carr last Sunday, as the Raiders waltzed their way to a 37-12 victory over the Broncos.

Having finally exorcised his Arrowhead demons last month, can Carr outshine Mahomes again? Read on as we explain how to watch the Chiefs vs Raiders online and get an NFL live stream from anywhere this Sunday.

How to watch the Chiefs vs Raiders from outside your country

Use a VPN to stream NFL action live from anywhere

Today’s Chiefs vs Raiders game is being shown on NBC, with kick-off scheduled for 8.20pm ET/5.20pm PT.

If you have it as part of your cable package, you can stream the game directly through the NBC website – or consider an over-the-top streaming service like Sling TV, whose Sling Blue package comes with NBC in most of the league’s biggest markets. Check out a FREE Sling Blue trial to see if it’s right for you.

How to watch Chiefs vs Raiders FREE without cable

Pricing starts from $64.99 a month, which is a darn sight cheaper than cable, and there’s even a FREE 7-day fuboTV trial you can take advantage of. That means you can watch today’s Chiefs vs Raiders game 100% free!

Not interested in signing up for cable or for a streaming service? Yahoo is showing every NFL game that’s being broadcast in your local TV market for free through its Yahoo Sports app, including the Chiefs vs Raiders.

Today’s Chiefs vs Raiders clash kicks off at 8.20pm ET/5.20pm PT in Canada, and TSN, CTV and RDS are providing linear TV coverage.

That obviously means the Chiefs vs Raiders game is covered, and it’s an absolute steal as DAZN costs just CA$20 a month or $150 a year – there’s even a free DAZN trial deal currently running that will get you access for nothing! Not only do you get every single NFL game, including NFL Game Pass and RedZone access, but DAZN’s also the exclusive Canadian streaming home of Premier League and Champions League soccer!

Payment is easy, too, as DAZN accepts a wide range of credit and debit cards, plus internationally recognized online payment platform PayPal for added convenience.

Here’s how FAU-G is different from PUBG

In AIApps and WebGaming
on 4 December 20202 min read

UK-based American fans can watch up to six NFL games live and in their entirety each week courtesy of Sky Sports, with the network now boasting a new dedicated Sky Sports NFL channel as well as offering access to the live RedZone highlights show each Sunday.

Las Vegas Raiders vs Kansas City Chiefs is one of this weekend’s featured games, and is being shown on both Sky Sports Main Event and Sky Sports NFL. The game kicks off at 1.20am GMT on Monday morning, with coverage starting at 1.10am.

If you don’t already have Sky and aren’t up for subscribing, the best option right now to watch these games in terms of value for money is Now TV, whose Sky Sports Monthly Pass costs £33.99 per month, and you can cancel at any time. Now TV also offers a £9.99 24-hour pass if you really only need to watch a game or two.

You can also tune in to the Raiders vs Chiefs via the NFL Game Pass Pro, as £143.99 gets you every single game of the 2020/21 season (subject to blackouts) including the playoffs, Super Bowl, RedZone access and more!

Not in the UK but still want to catch the action on Sky Sports? Grabbing a VPN will let you log into a UK IP address so you can live stream NFL as if you were at home.

How to watch Raiders vs Chiefs: live stream NFL in Australia

If you live in Australia and want to watch the NFL this season, you have several options to do so and are well covered for this week’s Raiders vs Chiefs game, which is scheduled to start at 12.20pm AEDT on Monday.

Kayo Sports is also showing the Raiders vs Chiefs.