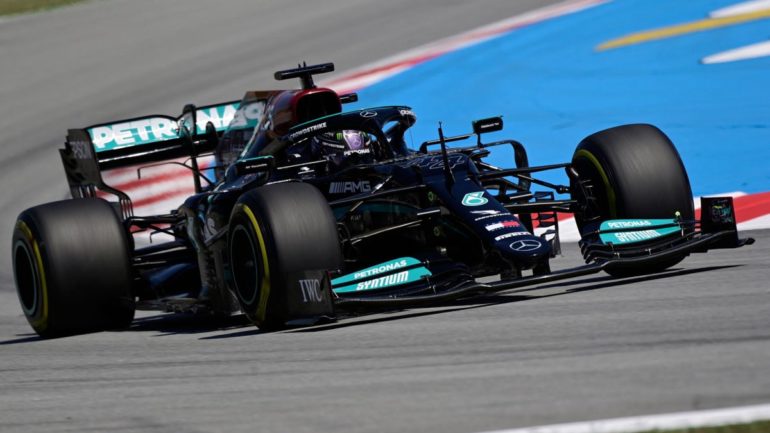 Lewis Hamilton asserted his supremacy by passing Max Verstappen on his way to a comfortable win in Portugal and he’s not – so to speak – letting his foot off the gas in Spain this weekend. See what happens next in the 2021 Formula 1 saga by following our guide to live stream F1 and watch the 2021 Spanish Grand Prix online wherever you are.

The seven-time world champion now leads Verstappen by eight points in the drivers’ standings. Yesterday he clinched his 100th career pole position, and we all know that Sir Lewis is not easily caught when he starts from the front of the grid.

Silly errors cost Verstappen both pole position and the fastest lap last weekend, and with this season’s championship battle poised so finely, every single point is precious. While it was groundhog day for Valtteri Bottas, who fell from first to third and stayed there, though Verstappen’s late track violation handed the Finn an extra consolation point for fastest lap.

Lando Norris continues to ooze class for McLaren. He’s finished in the top five in every race so far, and currently sits third in the drivers’ standings. Sergio Perez and Charles Leclerc are also looking strong, and there have been some promising signs from Alpine duo Esteban Ocon and Fernando Alonso, too.

There’s still a lot to look forward to in Catalonia, so read on for full details of how to get an F1 live stream and watch the Spanish Grand Prix online today. Catch all the F1 Spanish GP action from start to finish – including details on how to watch the qualifiers and practice – with the help of this guide.

Free F1 live stream: where can you watch GP for free

Several countries around the world have the rights to show their home Grand Prix on free-to-air TV. In Spain the only free option is to watch with a DAZN free trial, but it’s even easier than that in other countries.

You can see a full list of free-to-air streamers on our dedicated guide on how to watch F1, where you’ll see that the Spanish GP can be seen absolutely free in countries like Germany on RTL and Austria on ORF Eins (TV and online).

And if you’re travelling abroad outside your country at the moment and wanted to tune into your familiar Italian Formula 1 coverage, you can use a VPN to do so as explained below – we rate ExpressVPN as the best provider out there, which has a great track record for unblocking geo-restricted streams.

How to live stream F1 from outside your country

If you’re abroad for this weekend’s Spanish GP, you’ll likely find you’re unable to access your usual Formula 1 coverage like you would at home. This isn’t necessarily cause for alarm, but rather the result of geo-blocking – best understood as digital borders that restrict certain services and content to certain parts of the world.

Fortunately, there’s a convenient way around this in the form of a VPN. This is a nifty bit of software that lets you whizz around these digital borders, thereby allowing you to globe trot and still access your preferred F1 live stream. It’s a completely legal workaround, very affordable, and super easy to use – allow us to explain more.

If you’re an F1 devotee, then you likely already know about F1 TV – it’s the streaming service to subscribe to for all the best live action, highlights, replays of classics races and a whole lot more besides – you can sign up on its website.

Most people will want to go for F1 TV Pro, which is the way to live stream every F1 Grand Prix in full – along with F2, F3 and Porsche Supercup as well. Prices differ from country-to-country – it’s $79.99 in the US, for example – and some even let you give it a try with a free 7-day trial!

Just note that not all regions have an F1 TV package with live Grand Prix coverage, with the UK and Australia being notable exceptions. But that still leaves people in the US, Canada, France, the Netherlands, Brazil and loads, loads more all included.

How to watch the Spanish Grand Prix: live stream F1 in the UK

Sky has the rights to Formula 1 in the UK, meaning you’ll be able to watch the Spanish Grand Prix on Sky Sports. Subscribers also get to watch on the move using the Sky Go app, which is available on nearly all modern phones, tablets, laptops, PCs and consoles.

For those without Sky, the best option is a Now TV Sky Sports Monthly Pass, which includes all 11 channels.

Coverage of the Spanish GP begins on Sky Sports F1 at 10am BST on Friday for the first practice runs, 10.45am on Saturday for Practice 3, 1pm for Qualifying, and 12.30pm on Sunday for the Spanish Grand Prix itself, which starts at 2pm.

F1 live stream: how to watch the Spanish Grand Prix in the US

In the US, it’s ESPN that’s providing comprehensive coverage of the 2021 F1 season. Cord-cutters are in luck, too, as you can get ESPN without having an expensive cable package.

Of the many and varied options, the best for Formula 1 fans wanting to watch an F1 live stream is Sling TV, whose Sling Orange package features ESPN channels for just $35 a month – save big with the latest Sling TV deal where you can get your first month for a mere $10!

Alternatively, fuboTV is an even more complete end-to-end cable replacement service, which offers ESPN and over 120 other channels on plans starting from $64.99 a month.

And, as described above, you may prefer to give F1 TV and its free trial a go if all you really care about is the world’s premier motor sport.

For the truly dedicated, practice sessions will go on-air just before the start times listed above.

New or existing subscribers to US streaming services can still access the platform of their choice from abroad by checking out a quality VPN and following the instructions above.

How to watch the 2021 Spanish GP: live stream F1 in Canada

As well as the official F1 TV service (as described above), you can watch the Spanish GP and all other 2021 F1 action on English-language TSN or French-language RDS – but they’re premium channels that typically come with a pay TV package.

If you get them as part of your cable deal, then you’ll just be able to log in with the details of your provider and get access to an F1 live stream.

If you don’t have cable, you’ll be well-served by their digital platforms. The TSN Direct and RDS Direct streaming services cost just CA$4.99 a day or (much better value) $19.99 a month.

The Spanish Grand Prix starts at 9am ET / 6am PT this Sunday, with Qualifying action on Saturday starting at 9am ET / 6am PT. Practice times are listed above and coverage is also being offered, going live just before the start of each session.

Remember you can take your favorite sports streaming service with you wherever you go – just try our No. 1 overall rated VPN 100% risk-free for 30 days and follow the instructions above.

Aussie F1 fans need to prepare for a late one, as the Spanish GP starts at 11pm AEST on Sunday night.

Paid-for TV network Fox Sports is showing every race of the 2021 Formula 1 season Down Under, including all of this weekend’s Spanish Grand Prix action.

But if you don’t have Fox as part of a pay TV package, your best option may be to sign up for the fast-emerging Kayo Sports streaming service.

It features no lock-in contracts and gives you access to over 50 other sports including the cricket, NRL, football… the list goes on! Handy if you don’t want to go all out on Fox.

After that, the Kayo Sports Basic Package costs $25 per month and allows users to stream across two devices simultaneously. The service also offers a Kayo Sports Premium Package, which provides three concurrent streams for $35 per month.

Don’t forget, you can take your coverage abroad with you as well. For those wanting to watch home coverage of sports from overseas, a good VPN is the solution.

The Spanish GP starts at a tricky time for F1 fans based in New Zealand, with the lights set to go out at 1am NZST on Sunday night/Monday morning.

Spark Sport is showing all of this season’s F1 races. It usually costs $19.99 per month, but if you just want to catch one race for free, you’re in luck, as there’s a 7-day free trial.

As well as the F1 action, you also get a bevvy of Black Caps and England cricket matches, NBA basketball action from the US, and EPL football.

If you’re abroad and want to sign-in to watch your subscription you can, using one of our best VPN recommendations.