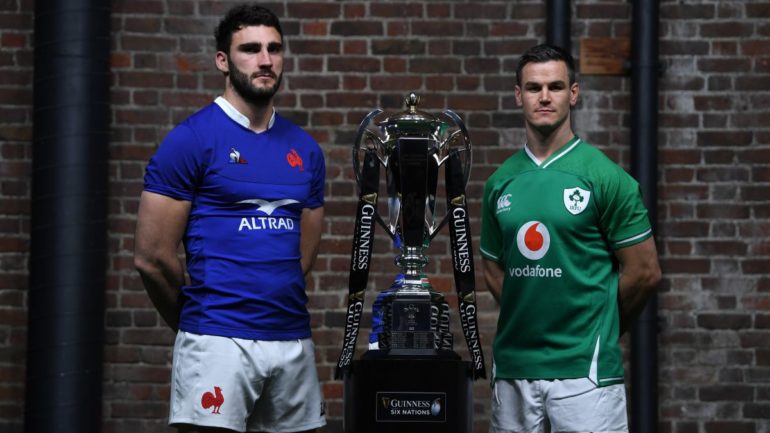 We were always expecting drama in abundance at the Stade de France tonight – and boy oh boy are we going to get it. After England earned a bonus point over Italy as expected, Ireland now know what they must do to win the Championship: beat France by seven points or more, or earn a bonus point victory. Follow our France vs Ireland live stream guide to tune in to the all-important Six Nations clash no matter where in the world you are right now.

France also have their Six Nations fate in their own hands, to extent, but the calculations necessary for Les Bleus to win the 2020 Championship are considerably more daunting. They need to beat Ireland by 31 points or more, with a bonus point, if their exciting young side is going to be celebrating in Paris tonight.

This match will take place behind closed doors at the State De France in Paris. The match kicks off at 9.05pm (local time ), which is 8.05pm GMT in Ireland and the UK, while it’s a 4.05pm ET start in the US and 7.05am AEDT kick-off tomorrow (Sunday, Nov 1) for those looking to watch the match. . The great news is that you can watch the match for free on BBC One – and you can still tune in from abroad with a VPN.

This all means England are favourites to take the trophy back to Twickenham, due to the unpredictable nature of the France vs Ireland game – and the fact that the Irish having only scored four tries in a Test against their opponents today twice since 1953.

They’ll draw encouragement from the fact that one of those occasions was last year’s Six Nations clash at the Aviva which saw the Irish win handsomely 24-14, but today’s cliffhanger will likely be a much closer encounter.

Robbie Henshaw is drafted into the Ireland starting line up as a replacement for Garry Ringrose, while Teddy Thomas’s injury sees Arthur Vincent handed a start in the France midfield with Gaël Fickou swapped out to the wing.

The great news is that this match is free-to-air in the UK and Ireland, so you can tune in to a free France vs Ireland live stream if you’re there. With kick-now having finally arrived, here’s how to watch the decisive Six Nations match online right now.

France vs Ireland kicks off at 8.05pm BST with coverage beginning on  BBC2 before switching for the closing stages on BBC1 at 9pm.

If you would prefer to use your laptop, phone, iPad or other device to watch the match, you can use the BBC iPlayer app to stream France vs Ireland instead – where the show will also be available in its entirety on-demand following the live broadcast. Best of all, it’s FREE provided you hold a valid TV license.

If you’re from the UK but not at home right now, you can get your rugby fix by grabbing a VPN.

How to live stream France vs Ireland from outside your country

For broadcast and streaming details in Australia, New Zealand, Canada and the US, we have all the information you need on this page.

But if you try to watch your domestic coverage from somewhere outside your home country, you’ll soon find a problem – geo-blocking. That’s where the broadcaster prevents you from watching your usual feed from abroad. It’s a common problem for sports fans all over the world. Fortunately, there’s an easy solution in the form of a VPN.

If you fancy watching France vs Ireland Down Under, you’ll need to be a subscriber to beIN Sports.

If you’re a Foxtel customer, you can add beIN to your package for an extra fee. No worries if you aren’t though, as you can also subscribe to beIN as a standalone subscription that can be watched on your laptop, desktop computer or mobile device. That costs $19.99 per month after you’ve taken advantage of a FREE two week trial.

That said, sports streaming specialists Kayo Sports includes beIN in its package. The Basic plan costs just $25 a month and lets you stream on two screens, while Premium is a mere $35 a month for simultaneous viewing on up to three devices.

Of the two, Kayo Sports Premium represents the best value as it offers multi-screen support – which means you can effectively split the price of a monthly subscription between friends or family and pay less.

Kayo also lets you watch a load of other great sports, and most enticingly, there’s even a free 14-day Kayo Sports trial on offer, so you can check it out for yourself without committing a penny Its app works across PCs, Macs, smartphones, tablets, select smart TVs and more.

France vs Ireland kicks off at 7.05am AEDT on Sunday morning.

The official broadcaster for France vs Ireland in New Zealand is Sky Sport, which costs $31.99 per month and includes channels dedicated to football, rugby, cricket and golf.

For mobile streaming, you can tune in via the Sky Go app, and if you’re away from New Zealand right now you can use a VPN to catch your home TV coverage.

The match kicks off at 8.05am NZDT on Sunday morning.

Streaming service DAZN holds the broadcast right for Six Nations rugby in Canada, and is showing every game live on its online platform, including France vs Ireland, which kicks off at 4.05am ET / 1.05am PT.

If you’re not already a DAZN subscriber, then you can take advantage of its 30-day FREE trial and enjoy the match without paying a cent.

NBC is the official US broadcaster for the 2020 Six Nations, and is showing every match between linear TV coverage and new streaming service, Peacock.

France vs Ireland is being shown on both NBCSN and Peacock, with kick-off set for 4.05am ET / 1.05am PT.

You’ll need to sign up for the Peacock Premium tier, but it costs just $4.99 a month, offers a FREE 7-day trial.

Best of all, signing up for Peacock Premium is easy – it only takes a few seconds and some basic details to get up and running, even accepting internationally recognized payment platform PayPal for added convenience.

If you subscribe to this or any other streaming service and find yourself unable to access it because you’re out of the country, remember that you can use a VPN to tune into your usual coverage just like you would at home. Of the many options, we rate ExpressVPN as the best of the best.