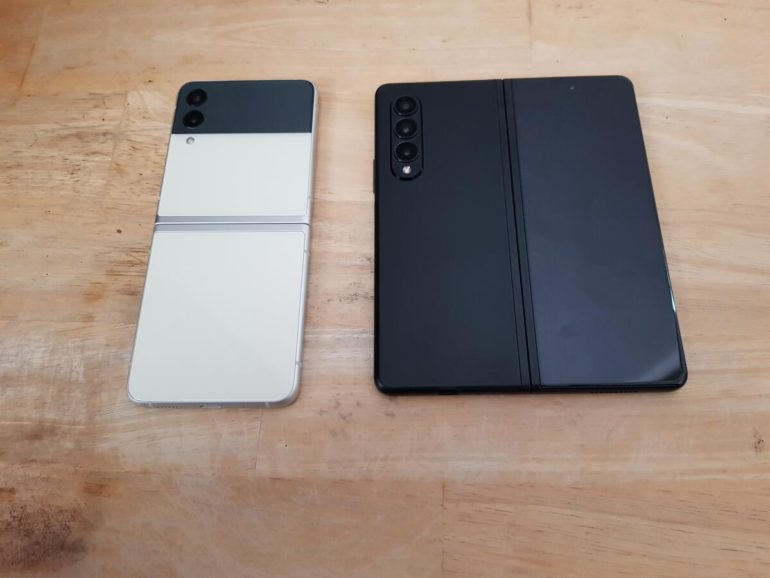 Samsung unveiled its latest foldable smartphones Galaxy Z Fold 3 and Galaxy Z Flip 3 with great flare at this week’s Unpacked event, making the promise it will take the category mainstream. The full specs of these devices can be found here, but here are my first impressions of the devices.

The Galaxy Z Fold 3 shares essentially the same aesthetic design as its predecessor, the Z Fold 2, albeit with some minor changes like the rear cameras, which now form a straight line instead of being in a square block.

When first holding the Z Fold 3, the first thing I noticed was it seemed sturdier than the Z Fold 2, especially when the device was folded shut or unfolded.

When folded shut, the Z Fold 3 felt compact and tightly held together. It’s a good feeling. Samsung said the Z Fold 3 has a thinner hinge so this may be what has helped the sides shut closer together. But I am guessing minor upgrades all-around in the cover glass material and display panel’s curvature also contributed to the improved sturdiness.

When unfolded, viewing the device from top or bottom, the two sides also looked better aligned, forming a visually pleasing straight line. For the Z Fold 2, one side would always be slightly bumped by the hinge, but this is now gone.

According to Samsung, the Z Fold 3 is supposedly 11 grams lighter than its predecessor, but this doesn’t really register and continues to feel heavier than conventional smartphones.

With the Galaxy Z Flip 3, you can tell right away that the company really wanted to ramp up the “cool” factor, especially by providing the new cream colourway.

The highlight of the device is really the bigger cover screen on the outside. Samsung intentionally bumped up the screen size from last year’s iteration and boy does it look stylish.

Comparing the aesthetics of Samsung’s new foldables, the glass covers on the Z Flip 3 are more noticeable compared to the Z Fold 3 as the former covers the body of the phone rather than just the screens.

Both devices have IPX8 water resistance, which means they can survive being submerged in 1.5 meters of water for 30 minutes. This isn’t an invitation to dump them deep in the water, but I sprayed water on both devices using a shower head for five minutes straight, and they both worked fine afterwards. I think it’s safe to say both foldables will fare fine to carry in the rain or around a swimming pool without worry.

The screens for both the Z Fold 3 and Z Flip 3 feel slightly toned down compared to their predecessors in terms of colour and brightness. The overall hues of these screens do still look more natural, however.

The two new devices both continue to offer the best OLED screen technology that Samsung can offer with both displays having 120Hz refresh rates to boot.

The overall user interface for both devices also feel improved. Apps have so far loaded up fast and screen transitions when altering the phone from folded to unfolded to flex mode are smoother. I think this is in part thanks to the hardware boost from Qualcomm’s Snapdragon 888 processor as well as Samsung’s improved optimisation capability when it comes to these form factors.

There are also some changes to on-screen icons, buttons, and app bars that generally look more polished compared to previous iterations. More third-party apps, such as BBC or Naver, also seem better integrated for the main screens, especially for the Z Fold 3. Pre-loaded apps had either none or less empty black spaces than before.

Turning to the crease, it’s still there for both devices. For the Z Flip 3, the crease looks identical to its predecessor’s, which means it is very noticeable and you can feel it most of the time. The Z Fold 3’s crease, meanwhile, is less noticeable as the horizontally wider screen just visually absorbs it better.

Samsung is supporting S Pen for the first time on the Z Fold 3. I found the screen’s response time to the stylus to be equal or even better than what I experienced with the Note series. There were no noticeable latency problems while I scribbled on the Samsung Note app.

The big question I had before I tried this feature was how the S Pen would hold up against the crease in the middle. Upon use, I was pleasantly surprised that I could write over it without any issues. It is noticeable, but it never interrupted the writing process. Enfolding the Z Fold 3 with a dedicated case that can house the S Pen also made the device feel premium and reliable.

The second big question I had was how much the S Pen would be used during day-to-day tasks with the Z Fold 3. This is something that will have to be tested out in the coming weeks.

For the Note series, the S Pen was not only an integral part of the experience, but the motions you had to go through to use it were also simple: You take it out and start jotting things down. I also usually used the S Pen while holding the Note device in the air.

By comparison, the Z Fold 3 adds one more step of having to unfold the device, which I have usually done with both hands due to the strength of the magnets holding the sides together. The Z Fold 3 is also much heavier than the Note series, so I have found using the S Pen while holding the device up with one hand a little more difficult.

Samsung touted the under-display camera on the Z Fold 3 heavily during its Unpacked event. Explaining how the new tech works, the front camera is placed under the main screen and is hidden when not in use.

My first impression is that the feature seems less subtle than, perhaps, it should be. When the camera is turned off, I thought the screen covering would be more uniform with the content playing around it, but this is not the case. When you are not using the camera and holding the screen far away, the hole is not noticeable. But when holding the screen slightly closer, I could see a flickering dotted circle where the hole is.

Samsung representatives said this happens when the hole area is experiencing different light transmittance to the remaining areas of the screen and that the dotted circle is the camera pattern being shown. It is something you notice every now and then but it remains to be seen how it will affect daily use, if at all.

Additionally, Samsung has opted for a 4MP front camera instead of a 10MP for the under display camera. The company claimed AI and other software make this pixel downgrade unnoticeable and, so far, I have only taken a few pictures with the 4MP camera and will need to test it fully to determine if the lower pixel count is worth the tradeoff.