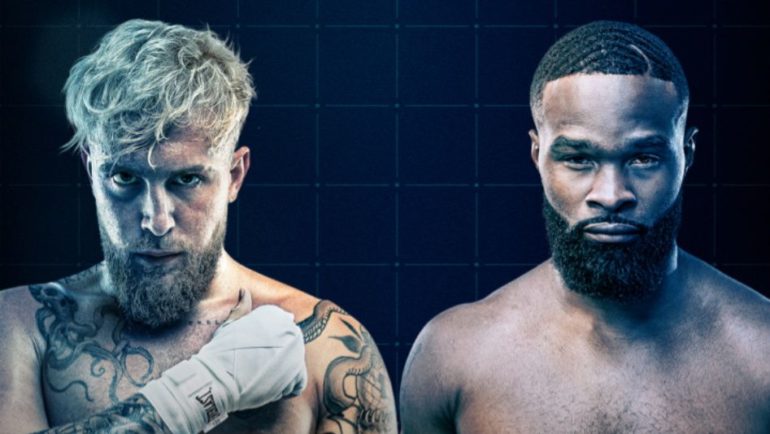 The date and time to watch Jake Paul take on Tyron Woodley in the ring is almost here. Will Sunday see the YouTube star get his comeuppance? Or will he continue his undefeated streak further at the cost of the UFC legend? You’ve landed in the right place to discover all the information you need to get a Jake Paul vs Tyron Woodley live stream this weekend.

Jake Paul has so far surpassed expectations of boxing pundits everywhere, going 3 for 3 in the ring to date.

OK, so an out of shape Ben Askren and ex-NBA player Nate Robinson weren’t exactly the most intimidating of foes, but Paul has so far handled himself with some accomplishment.

In front of him on Sunday will stand 39-year-old former UFC champ Tyron Woodley. He’s an intimidating physical specimen and he’s certainly not short of punching power – it was a jaw-rattling right hook that catapulted him to UFC glory five years ago.

We’ve got a cracking undercard to look forward to too, as Amanda Serrano defends her WBC, WBO, IBO World Featherweight titles against Yamileth Mercado, and Daniel Dubois and Tommy Fury also in action.

Love it or hate it, it’s going to be a spectacle, that’s for sure. Here’s all you need to know about how to watch a Jake Paul vs Tyron Woodley live stream.

The event is set to begin at 8pm ET / 5pm PT, and it’s likely that the two fighters will make their ring walks at around 10pm ET / 7pm PT, though that of course depends on how long the earlier fights last.

PPV platforms have this wrapped up pretty much everywhere. But if you’re abroad and discover that your coverage is geo-blocked, then the only alternative that we know is to use a VPN to dial in to a country that is showing the fight.

Where to watch Jake Paul vs Tyron Woodley in the US

Anyone in the US looking for a Jake Paul vs Tyron Woodley live stream will need shell out $59.99 on the pay-per-view event on Showtime or via dedicated boxing streamer Fite.TV.

You can get Showtime and Fite.TV on a selection of devices including iOS, Android, Amazon Fire TV, Android TV, Apple TV (4th Gen+), Roku, Xbox One, as well as simply on their websites.

You can also find the fight through a range of cable services including DirecTV, Verizon, Spectrum, and Dish if you want to watch as well.

The event is set to begin at 8pm ET / 5pm PT, and it’s likely that the two fighters will make their ring walks at around 10pm ET / 7pm PT – though that of course depends on how long the earlier fights last.

Jake Paul vs Tyron Woodley live stream: how to watch the fight in the UK

BT Sport is the place to watch Jake Paul vs Tyron Woodley in the UK, but as it’s a PPV event you’ll need to purchase it from the BT Sport Box Office, where it costs £16.95.

You’ll have to prepare for a late one though, because coverage of the event starts at 12.30am BST on Saturday night/Sunday morning.

The fighters are expected to make their ring walks at around 3am, though this is subject to change. Either way… it’s probably good to set a coffee pot on.

If you’re outside the UK and want to tune in, it’s simple to do with a handy tool – simply grab a VPN and follow the instructions above to live stream the action.

How to watch Jake Paul vs Tyron Woodley: live stream the fight in Australia

The fight is priced at $29.95 and likely to start no earlier than midday AEST on Monday (the full card starts at 10am) – a positively sociable hour compared to other parts of the world… as long as your boss doesn’t mind you watching!

So to watch the fight, you’ll need to sign up via the Foxtel site or Kayo Sports Main Event. Click the link where you can sign up to watch, where you’ll then be able to live stream the whole event via your web browser and devices like Android, iOS, Samsung TV, Apple TV, Android TV, Telstra TV and Chromecast.

Aussies who find themselves out of the country but want to tune into Main Event’s coverage can take advantage of a VPN like ExpressVPN, which is great value and gives you 3 months FREE if you sign up for a 12-month plan.

Canadian fans will also be tuning into Fite.tv to watch Paul vs Woodley this weekend. The PPV cost is set at $59.99USD, which is around CAD$75

Fite.TV offers both a browser service and iOS and Android apps, but you can also order through a range of cable services including Rogers and more.

Who is Jake Paul?

Jake Paul is the 24-year-old younger brother of Logan Paul, each of whom rose to fame through social media.

He first gained a following on Vine, before expanding to YouTube and joining the cast of Disney Channel series Bizaardvark, from which he was later fired.

He’s resorted to increasingly extreme and controversial measures to further increase his profile, the latest of which is an extremely lucrative – and often farcical – fledgling boxing career.

After initially serving as little more than a support act for his older brother, Jake Paul has become by far the more successful fighter, and has beaten fellow YouTubers Deji Olatunji and AnEsonGib, as well as former basketball player Nate Robinson and former Bellator champion Ben Askren.

Who is Tyron Woodley?

Tyron Woodley is a 39-year-old former UFC champion, who bowed out of the Octagon when his contract ended earlier this year.

Unlike his good friend Ben Askren, Woodley’s known to pack a powerful punch, which was best demonstrated in his knockout of Robbie Lawler on the night he won the welterweight title.