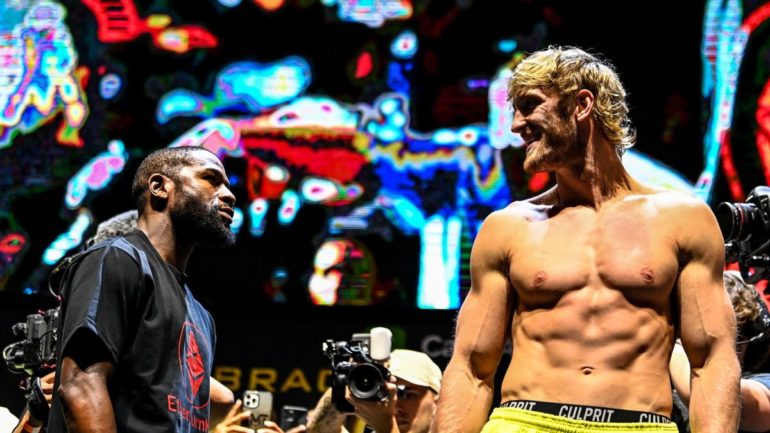 The trash has been talked. The caps have been stolen. And now it’s time for the business of boxing. Whatever you think of today’s Floyd Mayweather vs Logan Paul exhibition, it’s certainly going to be a spectacle. And if you’re among the millions who want to tunein, then we have all the information you need right here on how to watch a Floyd Mayweather vs Logan Paul live stream – including the time, rules, full card and more.

Mayweather is one of the greatest to have ever stepped into the boxing ring and has an unblemished 50-0 professional record. He’s a fighter with unrivalled punching accuracy, who could dodge a bullet if he wanted to.

However, he’s 44 and used to fighting opponents around 50lb lighter and six-inches shorter than YouTuber-turned-brawler Logan Paul.

But can he make it count? Logan Paul has only fought professionally once – a defeat at the hands of a fellow novice who was both shorter and lighter than him – whereas Mayweather has beaten all of the fellow greats of his era, including the famously hard-hitting Diego Corrales. But Logan Paul did manage to steal Mayweather’s cap at the press conference, so at least he’s got that!

Love it or hate it, this could be intriguing contest that will almost certainly end with a heavily battered ego. Here’s all you need to know about Floyd Mayweather vs Logan Paul date, time, live stream options and more.

This will be Mayweather’s first fight in 28 months, and Logan Paul’s first in a year and a half – the event is set to take place on Sunday, May 6.

Showtime’s PPV presentation is slated to start at 8pm ET / 5pm PT, so we’d expect the fighters to head to the ring at around midnight ET / 9pm PT. That’s 5am BST in the UK and 2pm AEST in Australia on Sunday, May 7.

Where to watch Floyd Mayweather vs Logan Paul in the US

US folk looking for a Mayweather vs Paul live stream will need shell out $49.99 on the pay-per-view event on Showtime.

You can get Showtime on a selection of devices including iOS, Android, Amazon Fire TV, Android TV, Apple TV (4th Gen+), Roku, Xbox One, as well as simply on its website.

You can also find the fight through a range of cable services including DirecTV, Verizon, Spectrum, and Dish if you want to watch as well.

In the lead up, 10pm ET / 7pm PT has been the time to set your stopwatch to throughout. But with these two in the main event, frankly who knows!

Mayweather vs Logan Paul live stream: how to watch the fight in the UK

It’s pay up or go without, we’re afraid – you can buy the Mayweather vs Paul fight for £16.95 via Sky Sports Box Office, and that’s your only option.

After paying, you can watch it either via your Sky account, or on your computer, mobile phone, tablet, console or TV streaming device.

We’re not expecting Mayweather vs Logan Paul to start their ring walks until around 3am, though this of course depends on how long the earlier fights last. Either way…probably good to set a coffee pot on.

To be clear, this won’t make up part of your usual Sky Sports or Sky TV packages.

Not in the UK? Then you’ll need a VPN to watch this live stream – follow those instructions set out above.

How to watch Mayweather vs Logan Paul: live stream the big fight from Australia

Main Event is the PPV channel for watching Mayweather vs Logan Paul in Australia. It’s priced at $49.95 and the fight is likely to start no earlier than midday AEST on Monday – a positively sociable hour compared to other parts of the world.

Aussies who find themselves out of the country but want to tune into Main Event’s coverage can take advantage of a VPN service like ExpressVPN, which is great value and gives you 3 months FREE if you sign up for a 12-month plan.

How to watch Mayweather vs Logan Paul worldwide

Not in those countries? Both Floyd and Logan are promoting little-known Fanmio alongside Showtime as the official website for PPVs as the ‘worldwide’ streaming option. Fanmio is charging $49.99 and it comes with a free t-shirt and you get entered into a contest to win a “video meet and greet”!

Among listed devices on which you can watch are Android, iOS, Apple TV and Amazon Fire TV.

As we say, PPV platforms have this wrapped up pretty much everywhere. But if you’re abroad and discover that your coverage is geo-blocked, then the only alternative that we know is to use a VPN to dial in to a country that is showing the fight.

But please note, for obvious reasons, we haven’t been able to actively verify that Express or any other VPN works effectively with the PPV platforms mentioned above.

Thanks to failed drug tests and late announcements, it took a while for the full match card to take shape. But this is now the official line-up:

Mayweather vs Logan Paul rules: how it will work

You weren’t expecting a regular Queensberry rules bout of pugilism were you? Well, this is going to work rather differently.

For starters, there will be no judges present and so no official winner can be announced (although knockouts are allowed and the referee is permitted to stop the fight if things get out of hand). It will take place over eight three-minute rounds.

And just in case the remarkable happens and Paul manages to KO Mayweather, the boxer’s perfect 50-0 record isn’t under threat as the ‘result’ won’t appear on any official records. It’s the very definition of an exhibition match.

Who is Floyd Mayweather?

Floyd ‘Money’ Mayweather is one of the greatest pound-for-pound boxers of all time – and widely considered to be the very best the sport has ever seen.

The 44-year-old won all 50 of his professional fights, the first of those against Roberto Apodaca in October 1996, the last against Conor McGregor in August 2017.

Having retired from boxing three times, Mayweather is consistently linked with a return to the ring – the biggest factor being the size of the purse.

He won his first exhibition match after the end of his professional career emphatically, knocking down kickboxing superstar Tenshin Nasukawa three times in the first round before the towel was thrown in.

Who is Logan Paul?

Logan ‘The Maverick’ Paul is an internet personality who rose to stardom via his YouTube channel, though in recent years he’s sought to expand his fame largely by stoking controversy and causing offense.

The 26-year-old has also forged an extremely lucrative boxing career, which started with a white-collar amateur bout with fellow YouTuber KSI in August 2018.

The fight was declared a majority draw, but KSI won the rematch – this time a professional fight – by split decision in November 2019.